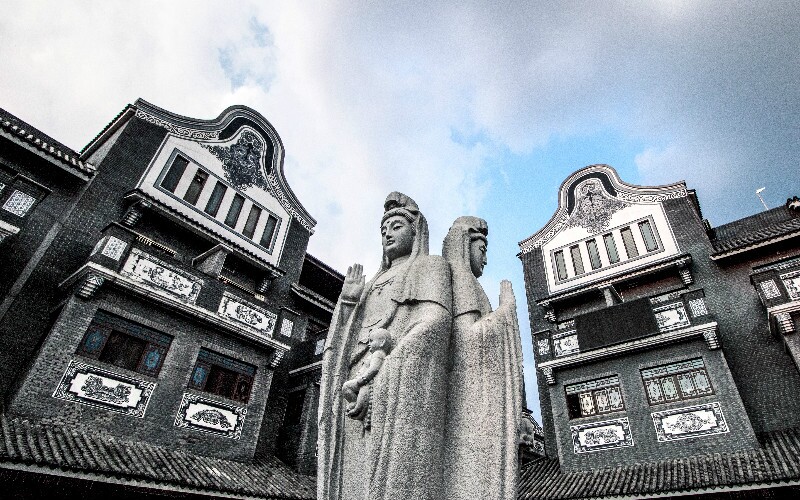 Foshan Travel Guide - How to Plan a Trip to Foshan

Foshan, located in south central Guangdong Province, is a major part of the heavily-populated Pearl River Delta area and a major hub of South China's history. West of Guangzhou, it's the westernmost large city of the Pearl River Delta megalopolis and neighbors Hong Kong and Macau in the south. HK is separated from Foshan by Dongguan and Shenzhen; Macau is separated from Foshan by Zhongshan, and Zhuhai.

7 Top Things to Do in Foshan

Ancestor Temple is a Taoist temple, but it's more like a museum of architecture and folk culture.

It also shows the rich folk culture of Foshan. There you'll have the opportunity to enjoy a kung fu show, lion dancing, and Cantonese opera. On site, there are the Confucian Temple, Huang Feihong Memorial Hall, and Yip Man Hall where you could explore the roots of Foshan's culture.

You will see Lingnan-style constructions such as arcades, green brick houses, and stone roads. Each building is a witness to the history of the city. Some of the buildings have been rented by galleries, cafés, bars, eateries, handicraft shops…

It's a good place to stroll or just to do people watching. Do take time to walk around the many alleys and by-lanes and do some window shopping at the galleries and handicraft outlets. The vibe there is similar to Xintiandi in Shanghai.

Medieval Nanfeng Kiln was built in the Ming Dynasty. It is the oldest and best-preserved kiln that has been used continuously to this day in the world. It was listed in the Guinness Book of World Records in 2002, as it has been producing ceramics for more than five hundred years.

The original working place for making pottery is retained there. You could visit the Shiwan Ceramic Museum and make your own pottery.

Liang Garden is one of the best representations of Lingnan Garden art of the Qing Dynasty along with Qinghui Garden in Shunde, Yu Yam Ancestral Garden in Guangzhou, and Ke Garden in Dongguan.

From the early Ming Dynasty (the 14th and 15th centuries), martial arts were popular in Foshan. By the turn of the Qing and Republican periods (1912), Foshan had numerous martial arts genres.

A number of internationally influential martial artists and martial arts organizations emerged. Many world-famous styles such as Choy Lee Fut, Hung Ga, and Wing Chun are rooted in Foshan.

Many of the inheritors of these schools have opened martial arts schools in Foshan. If you are interested in Chinese kung fu, we can arrange an authentic experience for you.

The 600-meter Huagai Road Pedestrian Street is where many authentic snacks and dishes can be found. Its small roadside restaurants will surprise you with their tasty excellence.

Apart from enjoying the food, you could visit Qinghui Garden, a classic Chinese garden and enjoy some quiet time in Fengjian Water Town.

For Bruce Lee fans, there's the Bruce Lee (Li Xiaolong) Ancestral Home in the south of Shunde District. It was Li Xiaolong's grandfather's house, where Bruce's father lived growing up, and Bruce lived only briefly during his childhood.

It's next to Bruce Lee (Li Xiaolong) Park, which has a huge statue of the martial artist and nice hilly and watery scenery for a city escape.

Foshan has a pleasant climate and is suitable to be visited all the year round except for typhoon days in summer. The best times to visit Foshan is from September to April, when it's not so hot or stormy.

How to Get to Foshan

By plane: Foshan has a small airport — Foshan Shadi Airport. It is about 30 minutes' drive from the downtown area with a few flights from Beijing, Shanghai, a few other less-well-known cities in China. It would be better to fly in to Guangzhou Baiyun International Airport, about 40 km (25 miles) north of central Foshan.

By Metro: Guangzhou has opened the Guangfo Intercity Metro Line, which connects Guangzhou downtown and Foshan with a half-hour ride.

From Hong Kong to Foshan, there are long-distance buses taking about 3½ hours. You could also transfer in Guangzhou or Shenzhen for trains etc. to Foshan.

You could take buses or a taxi from central Foshan to Shunde District. The journey is about 1 hour by taxi.

The intercity bullet train from Guangzhou South to Shunde takes about 10 minutes!

Plan a Trip to Foshan with Us

It will need at least two days to explore Foshan and Shunde. Contact us if you are planning a Foshan trip. We can expertly create a trip for you based on your group size, time, budget, interests, preferences, and other requirements.