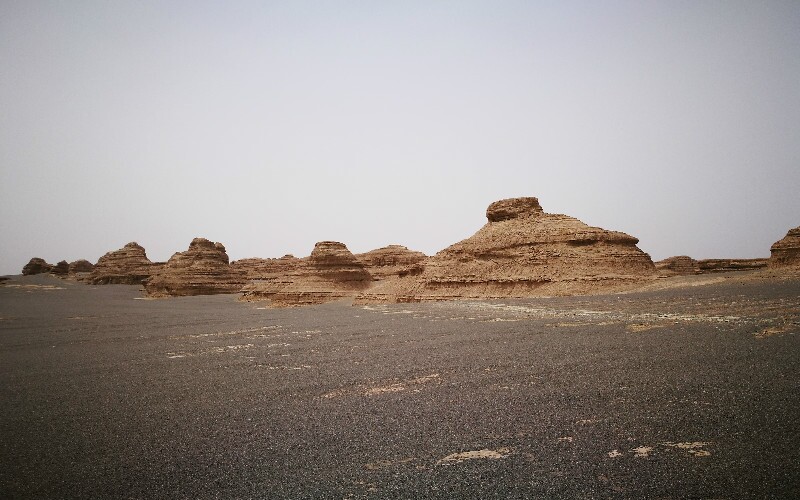 Yumenguan ('Jade Gate Pass') served as a strategic fort along the ancient Silk Road. If you are really interested in Chinese history or the Silk Road, then the 3½-hour drive there from Dunhuang is worthwhile. The main things to see are the vastness of the desert scenery and a large gatehouse relic.

The History of Yumen Pass

Yumen Pass and Yang Pass, 60 km to the south on the opposite side of the desert valley, played a part in the Han's successful campaigns to defeat their enemies the Xiongnu (a Mongolia-based nomadic league of that time). The Han Empire doubled in size during Emperor Wudi's reign through the incorporation of this territory and others.

This fort and Yangguan controlled a vital pass in the great Gansu Corridor valley that stretched between Central Asia and the Han Empire, with giant mountain ranges north and south bordering the valley.

Yumen Pass is thought to once have been a key military and mercantile installation for their empire, where the Han traded for products such as jade and horses with the locals and traders who traveled from Central Asia.

It is thought the fort helped to guard a market area. This lowland route was the main Silk Road trade and travel route in the Han Empire.

It was called Jade Gate Pass, as it was said that the jade from Hetian in Xinjiang was transported through Yumen Pass.

During the 5th century the fort was abandoned. It was rediscovered in 1944.

The Poems of Yumen Pass

Isolated and bleak Yumen Pass inspired many old poems, of which Cool Province Words (凉州词) by Wang Zhihuan (王之涣) of the Tang Dynasty (618–907) stands out:

How to Visit Yumen Pass

What to See/Do in the Area

See the ancient ruin areas: Besides the gatehouse, there is a beacon tower called Majuanwan, and a portion of Han Great Wall. The Dunhuang Great Wall section and the beacon tower are about 5 km further west by road. The wall is made of sandstone and hay.

Visit the museum: There is a small museum behind the gatehouse structure that instructs about the history of the pass. It has exhibits from the Han Dynasty era (206 BC–220 AD).

You can tour Dunhuang with a private driver

China Highlights offers private chauffeured transport and an English-speaking guide as a more comfortable and convenient alternative to public transportation.

Our private tours come with a private vehicle and driver suited to your group size. An English-speaking tour guide helps for all your communication needs.

If you would rather design your own Dunhuang and Yumen tour with our help, tell us your interests and requirements, and China Highlights will tailor-make your tour.

Yumen would fit in a Great Wall tour or a Silk Road tour.