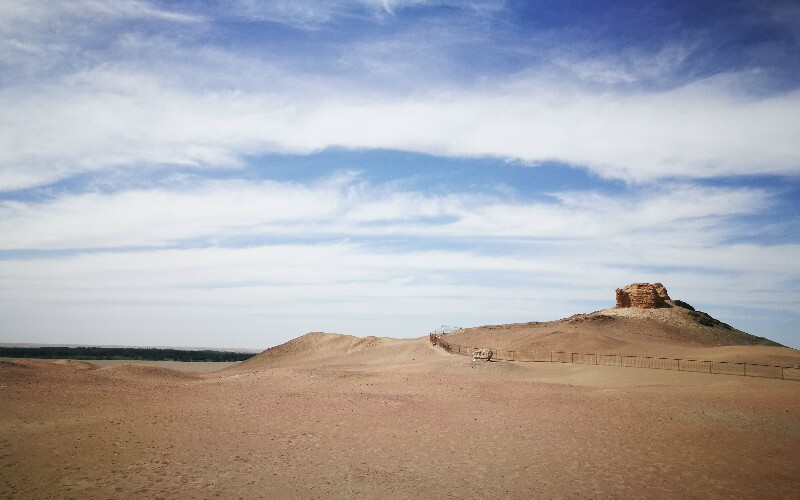 Yangguan (Yang Pass) was one of the two important western passes (the other being Yumen Pass) of the Great Wall in the Western Han Dynasty (206 BC–24 AD). It was established and used as China's western frontier defense outpost by Emperor Hanwudi (156 BC–87 BC).

In ancient China, Yang meant the south, and Yang Pass got its name due to its location to the south of Yumen Pass. Together with Yumen Pass, Yang Pass protected Dunhuang from invasion from the northwest, and witnessed the prosperity of the ancient Silk Road as one of its important forts.

History of the Yangguan Pass Ruins

This mountain pass was fortified by officials of Emperor Wudi (156 BC–87 BC) of the Western Han Dynasty (206 BC–24 AD) around 120 BC and used as a military garrison outpost. It played a part in the Han's successful campaigns that defeated the local people called the Xiongnu and doubled the size of their empire.

This garrison area and one to the north called Yumen Pass controlled vital passes in a great valley that was used for Silk Road trade with Xinjiang and western Asia. The valley is called the Gansu Corridor.

The valley is relatively flat lowland that is walled on both the north and south by great mountain ranges that stretch far east and west. The valley stretches to Xinjiang, so traders or armies on horseback used the valley to reach the Han Empire.

Yang Pass protected Dunhuang from invasion from the northwest. It helped bring prosperity to the northwest region of the Han and Tang empires and maintained the trade on the ancient Silk Road. A vital oasis that provided food and water that was strategically important to armies and their animals is close by.

The name Yangguan: It is thought that the garrison fort was called Yangguan because in ancient times the word "yang" meant south. It was south of Yumen Pass, so it was called the "south pass." The world "guan" can mean pass or gate.

Later history: The fort area was also important for the Silk Road trade of the Tang Empire (618–907) about 800 years later that also profited from Silk Road trade. But in the Song (960–1279) and Ming (1368–1644) dynasties, Yang Pass was gradually forgotten because of the decline of caravan trade along the Silk Road.

What to See/Do in the Area

See the ancient ruins area: There are some ruins such as bits of wall or the remains of a beacon tower on a hill. The beacon tower measures 5 meters (16 feet) high and 8 meters (26 feet) wide, and it is thought the original gate might once have been nearby. The gate itself is gone.

An area measuring about three square kilometers is designated as the Yangguan Cultural Relics Scenic Area, and at the edge of the area there is a modern museum with exhibits.

Visit Yangguan Museum: The Yangguan Museum was opened to the public in 2003. It has exhibits from the Han Dynasty times (206 BC–220 AD). The museum has ancient artifacts, paintings, and pictures. It is a fairly basic museum, but the building itself has an interesting style.

See the natural scenery: When it is hot and dry in the early summer and fall, the big white towering wall of mountains in the distance contrasts dramatically with the desert scenery.

Yang Pass has an elevated desert climate, dry with a daily temperature range of 15ºC (27ºF). It's hot in the summer and very cold in the winter. Temperatures average at a comfortable 20ºC (68ºF) in May and September, so early and late summer are the best times to go. Dunhuang (see below) summer's are not too hot with the average July high at 33ºC (91ºF), but the sun is strong with cloud cover rare and altitude over 1,000m (3,300 ft).

How to Get to Yuanguan Pass

Transport
Yang Pass is midway between Lanzhou and Urumqi on the edge of the Taklamakan Desert, in northern Gansu Province, northern Central China. Yang Pass is located 70 kilometers (44 miles) northwest of Dunhuang City (the closest place with an airport), Gansu Province, or over 300 kilometers (450 miles) by road from the small town of Yumen (the nearest place with a railway station). China Highlights use high-quality air-conditioned private transport to take the hassle out of getting to the wall.

Taxi: There are no buses to the area, but round trip taxi fare for four people would cost about 300 RMB (USD 48).

What to Wear
Dress for walking and dress for the weather. Choose comfortable footwear with good grip and support for the feet. Layers of clothes that can be taken on and off allow for greater comfort and temperature control. Wear/bring sun protection in the summer and dress for sub zero temperatures in the winter.

What to Bring
Umbrellas may be used here, but may be inconvenient in strong winds. Bring a camera and money for souvenirs and refreshments. Bring snacks and water if you want to walk in the desert a long time.

China Highlights offers private chauffeured transport and an English-speaking guide as a more comfortable and convenient alternative to public transportation.

Our private tours come with a private vehicle and driver suited to your group size. An English-speaking tour guide helps for all your communication needs. Enjoy a trip to the Dunhuang area with us.

If you would rather design your own Dunhuang and Yangguan tour with our help, tell us your interests and requirements, and China Highlights will tailor-make your tour.

Yangguan would fit in a Great Wall or Silk Road tour.