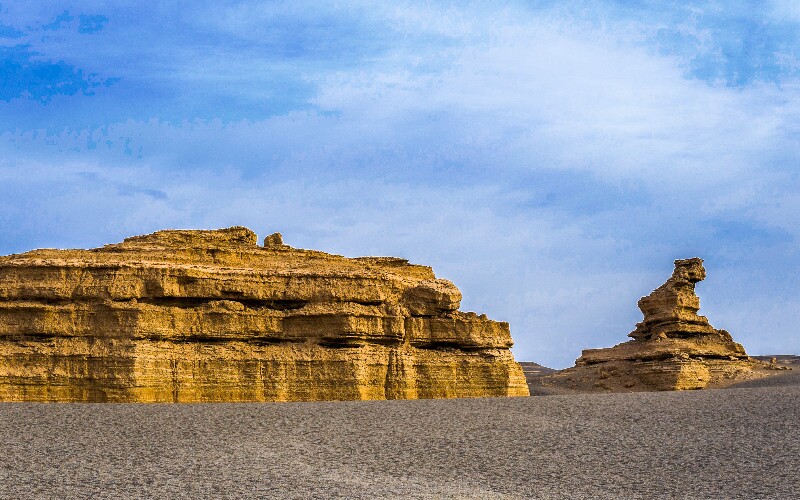 It is located on the border of Gansu and Xinjiang provinces, close to the mysterious Lop Nur. It comprises a rare natural museum of naturally-formed sculptures, with ordered mounds in peculiar shapes.

The yardang landform is formed by wind erosion in dry regions. The word “yardang” comes from a Uyghur word, meaning "a small hill with steep walls". China's yardang landforms cover an area of about 20,000 square kilometers (7,722 square miles), mainly distributed in Qinghai, Gansu and Xinjiang.

The yardang landforms in Dunhuang have hard, light red soil covering an area of about 50 square kilometers (about 19 square miles). They typically exist in dry areas.

The yardang landforms in Dunhuang are the largest and most ornamental such geological features in the world. They are a valuable and non-renewable natural heritage.

Yardang National Geopark is known in the locality as 'Ghost City', because when the wind blows through, there are sounds similar to ‘ghosts screaming’. There is an interesting legend.

There was once a magnificent castle, where the people worked hard and lived a comfortable life. With the accumulation of wealth, however, evil gradually took over people's minds. They fought each other for money.

In order to improve the situation, a god came to the castle disguised as a ragged beggar. He told people that evil had changed him from a rich man to a beggar, thinking this would help them mend their ways, but his idea did not work. Instead, he was reviled and mocked.

As a result, he angrily turned the city into ruins, and all the people in the castle were buried under rubble. Every night, the spirits of the dead in the castle cry out, hoping the god will hear and respond to their confessions and pleas.

The best time to visit Dunhuang is from May to October, with more comfortable temperatures and beautiful scenery. The most beautiful season in Dunhuang is autumn. Poplar leaves turn gold. Yellow sand mountains and the grey Gobi Desert compete in a beauty contest against the clear, blue sky.

How to Get to the Park

The park is about 200 kilometers (124 miles) from the Dunhuang urban area. Considering the long journey, it’s better to hire a car or take a taxi. Alternatively, visitors can take a direct bus at the city bus station from Dunhuang to the park.

If you choose to travel with us, we will arrange your transport. You won’t be worried about how to communicate with local people when you hire a car or taxi. Our private car is spacious and comfortable. It will escort you to the park.

Yardang National Geological Park has two tours: the northern and southern lines. Tourists tour the north tour by sightseeing bus. The bus stops at 4 spots. You can have a 10- to 30-minute visit at each spot. The whole northern tour takes about 2 hours.

The first stop on the tour is at the greeting golden lion. From a distance, it looks like a huge lion greeting guests. It was formed by the force of water, strong winds, and collapsing earth.

The second site is the sphinx. Soft sandy-soil stone was swept away by rainstorms and wind erosion. The original block of rock was cut into a stone pillar. The pillar was sculpted by strong winds into a lion with the face of a human being.

The third stop is at the peacock. It is a separate stone pillar and was also formed by strong winds and rains. It resembles a peacock unfolding its tail to exhibit its beauty.

The fourth and most spectacular spot is the Armada. Unlike the first three individual stone pillars, it is a group of objects, looking like a powerful fleet of ships; ships in the Gobi Desert.

Southern Line–Explore at Your Own Pace

If you still have an appetite for more after the northern line, you can hire a jeep to start your tour of the southern line. Once you set foot in this district, you will feel like you're walking into a movie or game set. The splendid scenery seems unreal.

You’ll see more natural stone pillars in various shapes and sizes, and a desert in the distance. At the highest point of the southern area, you will obtain a good panorama of the region over a radius of miles. Unlike when touring the northern line, you can have plenty of time to visit and take photos.

In about an hour, you can go from Dunhuang city across a large stretch of the Gobi Desert to reach Jade Gate Pass. Then proceeding along the ancient Silk Road, the Yardang National Park is 85 kilometers (53 miles) from Jade Gate Pass.

On the way to the park, visitors can see traces of ancient Western China with the historical Great Wall built in the Han Dynasty (206 BC–220 AD) and ancient beacons (used to send messages during wartime). The tapestry formed from blue sky, marsh, meadows, lakes, wild ducks and wild geese gives visitors a simple sketch of the western region of China.

The beautiful sunset in Yardang National Geological Park is a wonderful scene you can’t miss. Clouds are dyed in red or orange. All is enveloped in bright golden light. It is quiet all around. The whole desert takes on a different appearance in the afterglow of sunset.

You watch the sun set slowly, eventually disappearing over the horizon. At that moment, you will be lost in the magnificent scene, marveling at the beauty and splendor of nature.

Take a photo to record this wonderful moment. Let the beautiful scene remain in your mind. The time of sunset at Yardang National Geological Park changes according to the season. It varies from approximately 7 pm (October to March) to 9 pm (April to September).

Our local guide knows the best times and places for observing and photographing. Let us help you arrange a nice trip.

Prepare for High UV and Exposure to the Elements

Dunhuang is in an arid zone, with hot, dry weather. There is no shelter in the Geological Park. It will be very hot in summer. Make sure you bring a hat, plenty of water, and some sunblock.

A face mask or scarf will help protect against the strong, dry, and dusty wind. Bring enough water and prepare a paper fan or battery fan to moderate the heat.

“Discovery Your Way” with China Highlights

If you like the idea of blue skies, marshes, meadows, lakes, wild ducks and wild geese, you should visit Dunhuang. Doing so will give you a simple picture of the western region of China. Traveling with us, you will have a hassle-free trip. See our popular itinerary below for inspiration:

Your tour can be customized. You can tell us all your tour ideas and requirements. We will tailor-make your journey.