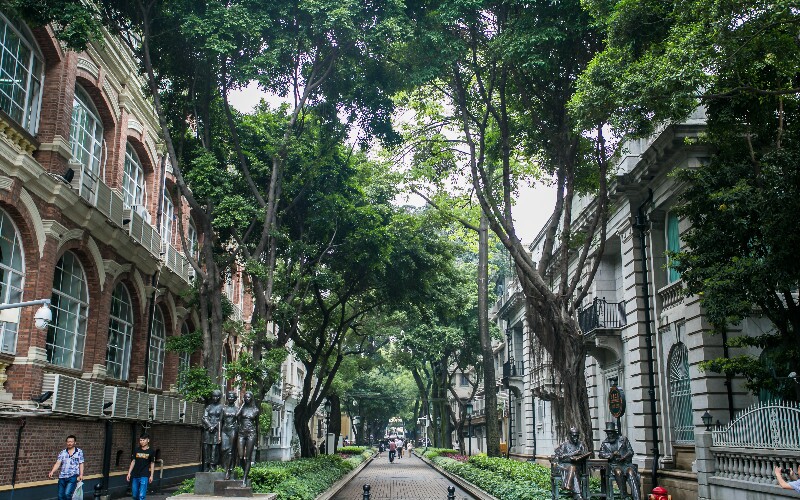 Guangzhou's top number 3 tourist attraction according to TripAdvisor is this scenic foreign settlement with old buildings built by foreigners from different countries. You could enjoy strolling among old European buildings of different styles and big old trees.

Sightseers will notice that structures in one area of the island has more of an English style and that one area has more of French style. You'll also appreciate the shady streets lined by shade trees. The big French cathedral stands out as one of the interesting buildings on the island. For those who can afford it, the White Swan Hotel is an option.

Many gardens and the trees make a walk more pleasurable. Foreign tourists appreciate the island as a quite place to get away from the crowds and noise of the city. Traffic is controlled to keep the island quiet, so it is partly pedestrian only.

A row of bars and cafes on the southwest side with views over the Pearl River serves visitors. During the 1700s to 1859, foreign companies and governments built offices on the island for trade with the Qing Empire. In 1859, European governments, especially the British, wrested the territory from the Qing imperial government.

About two-thirds of the island was the English concession and one-third was the French concession. Many embassy buildings were built on the islands. Now only the government of Poland has an embassy on the island.

Travel to the island is convenient because it is near the center of Guangzhou about 6 kilometers west of the popular tourist area Tianhe Zhujiang New Town. There are no bus stops on the island itself, but bus stops are nearby.

Scenic walk: You could take a scenic walk there along the north side of the Pearl River by getting off of Line 3 at Zhujiang Station or the APM Line in Zhujiang and walking westwards along the river.

By subway: Take Subway Line 1 to Huangsha station. Get out from Exit F and walk via an overpass to reach the island.

The ferry from Huangsha Pier to Fangcun Pier is only 0.5 RMB without a bike or 1 RMB with a bike. It runs every 10 minutes.