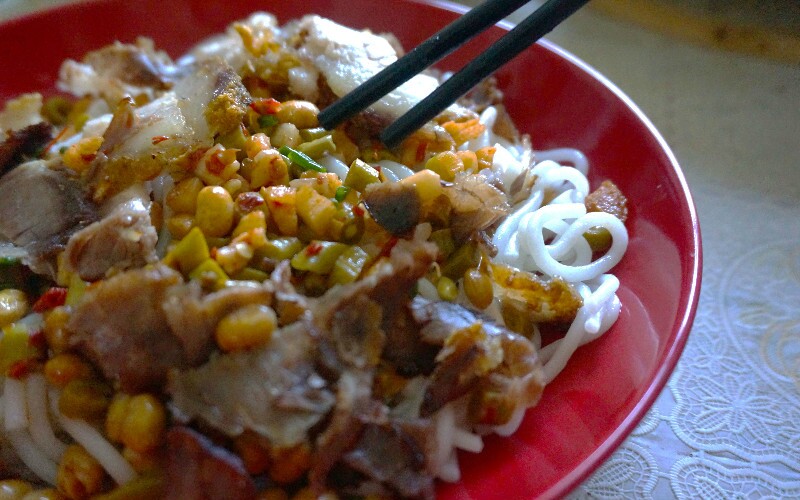 Guilin rice noodles, mifen, is the most famous and popular local snack in Guilin. It is pliable but strong, fragrant and mellow, and cheap.

Local people consume it as breakfast, lunch, or dinner. Guilin rice noodles can probably be found within 100m of any town or city area in Guilin.

Plain rice noodles are white, and taste soft and smooth. They are made from rice flour starch, and come in mainly two shapes, round (米粉 mifen /mee-fnn/ 'rice noodles') and flat (切粉 qiefen /chyair-fnn/ 'sliced noodles').

Rice noodles, gravy, fried peanuts or soybeans, chopped scallions, thin slices of different kinds of meat are added at the food counter by the mifen chef for various versions of this renowned and tasty dish. You can also add marinated eggs at extra cost (1.5 yuan each).

Whatever the version of rice noodles, the gravy is the cream of it. The gravy is slow-boiled for several hours with various (up to 20) ingredients and spices, such as dried tangerine peel, cinnamon, and ginger. There is no standard recipe for making the gravy, so each noodle shop may have their own secret recipe that hopefully stands them out from other shops.

Well-chopped condiments are usually put on a separate table for customers to add by themselves, including spring onions, chili, pickled beans, and pickled white radish in chili sauce.

This is the most common version of Guilin rice noodles. When preparing the rice noodles, the chef puts them in a sieve ladle to heat them up in boiling water, before putting them in a bowl.

Gravy, oil, fried peanuts, pickled beans, chopped scallion and thin slices of marinated meat are added on top. If you like it spicy, add some pepper oil yourself. Take a look at the mix of colors and smell the fragrance, before you stir them evenly. There is usually a free pork bone broth in a large self-service pot.

The most standard way of eating gravy noodles, is that you first eat (most of) the noodles, then add some broth and scallions and slurp up the rest. Of course you can add the free pork bone broth to the noodles to eat right in the beginning, but you might as well order a bowl of broth noodles, and see how different it is.

Different noodle shops have their own recipe for making the broth, but the most common ingredients are pork, pig skin, and entrails. The chef adds the broth to the noodles a long with some chopped scallions, fried beans and vegetables. Broth noodles taste hot and fresh, especially suitable for people who like light flavors and want to get warm in winter.

The chef first puts the ingredients in an iron wok. For 'three fresh' noodles, they use pork, pig liver, and intestines; for sour and spicy noodles, they use pickled sour bamboo shoots and pickled chilies. Then the chef adds condiments like salt and chicken powder, vegetables, and finally puts the plain rice noodles into the thick soup to boil for a while to absorb the flavor.

Where to Eat Guilin Mifen

Guilin rice noodles is well-known throughout China, and it is also available in some other cities, but of course you have to taste it in its hometown to get the most authentic flavor. In Guilin, if you spot a noodle shop where lots of people are eating rice noodles (with crowds spilling out onto the street at breakfast time), eat there because that's probably a good one. Below we recommend two old brands.

Started in 1986, this brand is considered the representative of traditional Guilin rice noodles. It has many branches in the Guilin city area, and is very popular with local people. Its environment is relatively clean and it is air-conditioned in summer, which sure is a plus. Some of its branches also serve Chinese fried dishes, snacks, and rice.

This old brand was started in 1896. Besides serving traditional Guilin rice noodles, its specialty is horse meat rice noodles. The broth is thick and fragrant, boiled from horse bones.