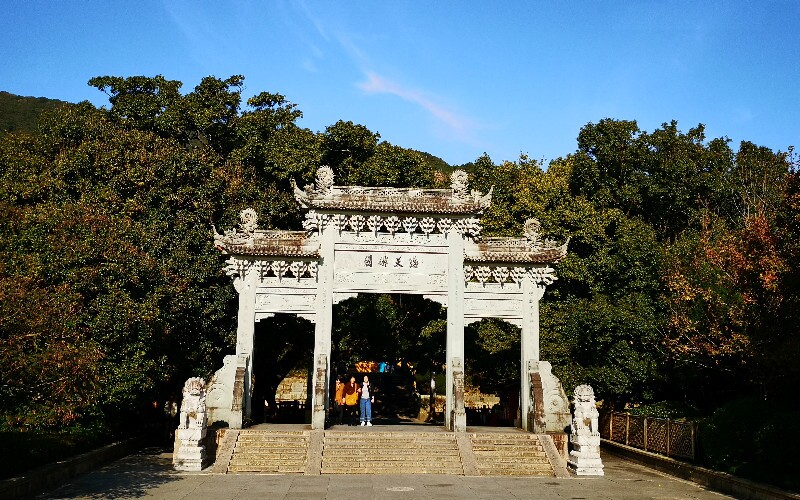 Putuoshan Island is one of the larger islands belonging to the Zhoushan Archipelago, a group of in all some 1400 islands located at the mouth of Hangzhou Bay, not far from the city of Ningbo, Zhejiang Province.

Putuoshan Island covers an area of some 12 square kilometers, most of which is pristine nature. There are fantastic vistas of the surrounding seascapes from Putuo Mountain, which is one of the Four Sacred Mountains of Chinese Buddhism. It is also home to the most famous Guanyin Temple in all of China (Guanyin is the Goddess of Mercy and the patron saint, as it were, of seafarers).

The sculpture of the Buddhist deity Guanyin in Putuo Mountain.

2. 33m tall statue of the Guan Yin at Zizhulin

3. Putuo Mountain is located on the island, one of the Four Sacred Mountains of Buddhism. There are a number of temples on Mount Putuo. During it heyday, there were 3 main temples, 88 monasteries, and 128 thatched houses for various other persons engaged in work in support of the temples and monasteries on the island, and more than 4000 monks were in active service on the mountain. Mount Putuo was understandably a place of great reverence, being referred to as the "First Buddhist Kingdom in Zhendan".

4. It is a tourist site for those in search of rare mountain beauty and tranquil walks among historical and religious relics. There are luxuriant trees everywhere on the island - especially a large number of ancient camphor trees - filled with a host of singing birds. The ground below is covered in season with fragrant flowers. Putuoshan Island has been aptly called "A Botanical Garden on a South Sea Island".

Located in the Putuoshan Islands, Mountain Putuo is one of China's four sacred Buddhist mountains, particularly oriented toward the Buddhist deity Guanyin, the goddess of mercy and compassion. Legend has it that Guanyin once showed her bodily presence here and left a number of historical sites.

The temples and shrines on the island are full of colorful sculptures depicting the deity in her various forms, from the common-seen South Sea Guanyin at her welcoming perch overlooking the sea, to various depictions of the Thousand-Hand Guanyin, whose tangle of limbs represents her ability to offer a helping hand to anyone in need.

The Mountain was originally called Mountain Meicun for a man named Meifu in the Han Dynasty had once lived here. It got the sacred spirit after a Japanese monk who came to China to seek for help. The monk planned to carry a Guanyin sculpture obtained from Mountain Wutai back to Japan. But unfortunately he was stopped by a storm at this area. He believed that the Guanyin was reluctant to live, so he landed and built the "Unwilling to Leave Nunnery" to host the sculpture. Since ever, the mountain has been heavily visited by pilgrims. View famous mountains in China.

Saturated with the fragrance of incense and strains of Buddhist chants, Mountain Putuo now offers a spiritual sanctuary contrast to the wafting, exhaust fumes and the din of auto horns that haunt many cities we live.

Lianhua Island is located opposite Putuo Mountain, separated by the sea. It used to be an abandoned island, till 1996 when artist Zhu Renming bought it and spent 15 years developing it into an artistic paradise. There are about 500 statues of arhat, with vivid postures and expressions.

The statues were designed by Zhu Renming based on the look of local fishing men, carved out of granite, and placed alongside an 800-meter-long causeway. Besides the natural sea scenery and arhat statues, on the island there are international art studios and art gallery.