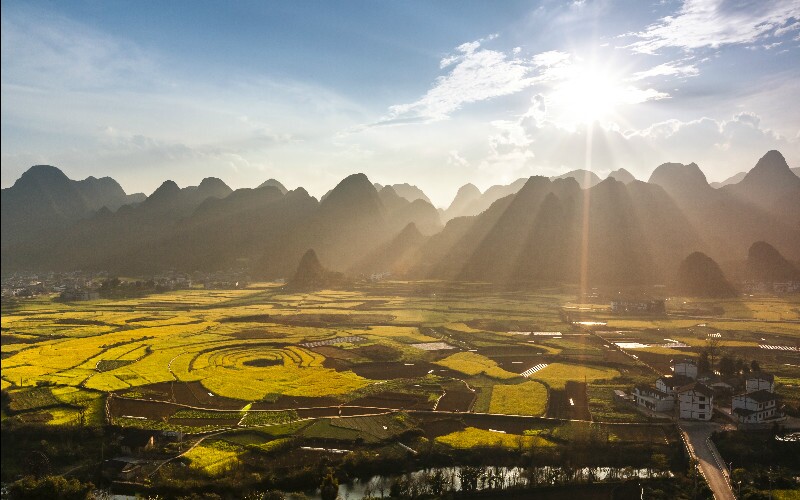 Qiandongnan Miao and Dong Autonomous Prefecture is located in the south-east of Guizhou Province. The unique natural and man-made scenery, together with the fascinating ethnic culture, makes Qiandongnan very attractive and charming. More and more people, including photographers, go there to enjoy the beautiful views, experience their lifestyle, and learn about their customs.

It's neither too cold in winter nor too hot in summer in Qiandongnan. However, generally, there are one or two snowy days in a year. Therefore, the travel season begins in the middle of April and ends in the middle of October. During this period, the climate there is agreeable and the countryside is covered with wild flowers.

Qiandongnan is inhabited by many different ethnic groups and, therefore, it has the reputation of being "the area of a hundred festivals for ethnic groups". Some main festivals, as well as the counties and villages where activities to celebrate the festivals are held, are as follows:

The highly recommended festivals are the Lusheng Festival, the Sisters' Meal Festival and the New Year Festival of the Dong Ethnic People.

3. Biasha Miao Village (岜沙苗寨) (ancient relics and customs, such as shaving a head with a sickle)-Yintan Dong Village (银坛侗寨) (the unique appearance of the Dong villages, old buildings, textiles, and the Dong people's costumes).

5. Mount Fanjing in Tongren (铜仁梵净山). Photography-lovers can take the cable car to the mountain top. The photographic subjects are the sunrise, scenic beauty, and the sunset.

6. After taking photos of the sunrise from the top of Mount Fanjing, photography-lovers can descend the mountain in the same way, moving to Yunshe Village (云舍), Jiangkou County to take photos of the Tujia folk customs, scenery along Jinjiang, and acres of rapeseed fields. Then, in the afternoon, visit Phoenix Town to film its night scenery.

Qiandongnan Miao and Dong Autonomous Prefecture is the biggest settlement area for Miao people, and Xijiang Miao Village is the biggest Miao village in China. There are more than 1,000 households in Xijiang Miao Village, located 36 kilometers north-east of Leishan County. It is 81 kilometers away from Kaili, the capital city of the Prefecture. Baishui River runs through the village. The biggest performance area is in the central square near Baishui River.

The Miao conservation culture is well-preserved and has been described as the open-air museum of the Miao People. The amount of houses consisting of fir wood structures built on stilts catch people's eyes. From Leigongping (雷公坪), located in the north of Leigong Mountain, people will find a view of the whole village, hidden in the forests.

The best sightseeing spot is on the mountain which stands on the road opposite the village. There is a square with many pavilions (which were built for viewing) on the mountain. Every night, the lights of each household fill the landscape, making the village much more attractive, like stars twinkling in the sky. Also, there are terraces with a gorgeous view.

Note: The pavilions are made of wood, and the stand also has wooden flooring. Therefore, it is not suitable for using a tripod as there are many vibrations when people are walking. Below the pavilions, there is a concrete floor and the angle to shoot photographs from there is good.

Best times for taking photographs: before 8am (the village is always clad in mist) or at night.

Located 17 kilometers north of Leishang, Langde Upper Village is one of the early famous Miao villages that opened to the public. The village is in harmony with its surroundings: in front of it, winds a river. In the southern part of the village, there is a "protecting village mountain护寨山" covered by dense firs; in the northern part of the village, there is a Wind and Rain bridge over the river. The bridge was built in the Qing Dynasty for defense and was rebuilt in 2006.

The most famous site there is Lusheng Square with two stone war-horses. The square is where the Miao people sing and dance together, such as wassailing songs, Miao-style songs, the Lusheng dance, the bronze drum dance, a bench dance, and a group dance.

Ge People Village is situated in Longchang Town (龙场镇), 19 kilometers north of Kaili. Surrounded by wood covered mountains, the village has a pleasant environment. There are more than 400 villagers. The extraordinarily special feature is that all the ethnic costumes, which mostly embody their ethnic characteristics, are perfectly preserved.

In the village, people can enjoy the Ge-style Lusheng dance, bench dance, wassailing songs, guest-welcoming songs, and the women's exquisite batik and embroidery.

The Three Treasures Dong Villages consist of villages of different sizes, spreading for more than ten kilometers. As its name implies, the villages can be divided into three parts, namely the upper, middle and lower treasures. It is called the "thousand-Dong-households" group of villages (千户侗寨), and it is the biggest settlement for Dong people in China.

As people enter the villages, a drum tower called the "seven-colored drum tower", which is over 20 stories high, will come into view. The drum tower is newly built, and the external features of it are very attractive.

Walking in the villages, people will see the amount of ancient banyans standing along the Duliujiang River. It is said that those banyans were planted in the Qianlong Empire Period of the Qing Dynasty, with a history of more than 300 years.

Subjects: Biasha cultural relics and customs, such as shaving a head with a sickle.

Biasha, a Miao village, is one of the well-known scenic sites in Congjiang County. It is seven kilometers away from Congjiang and is situated on the mountain at an elevation of 500 meters. The forests are everywhere in Biasha. The simple wooden buildings, traditional Miao-style costumes and special lifestyle are distinct features there.

Xiaohuang Dong Village is a wonderland filled with green mountains and blue water. It is has been a world famous "hometown for Dong songs" and "music heaven". All over the village, men and women, boys and girls enjoy music, and they sing everywhere and sing for everything.