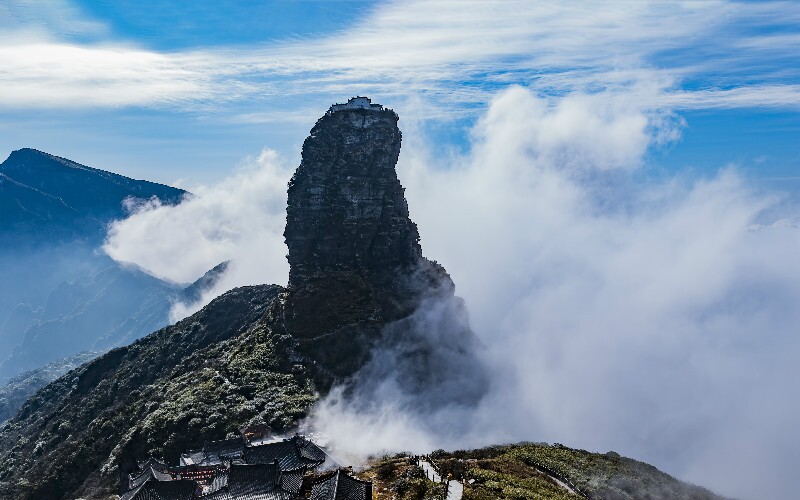 Fanjing Mountain peak is the summit of the Wuling Mountain Range of south-central China, in the region where Guizhou and Hunan converge with the border of Chongqing. Since ancient times, it has been known as the "Top Mountain of Guizhou".

Fanjing has played an important part in the history of Chinese Buddhism. Over the ages, it has been visited by emperors and Buddhist pilgrims. It hosts a unique natural habitat that is home to a number of rare plant and animal species.

In 1986, Fanjing Mountain was recognized as one of the International Network of Biosphere Reserves, and on July 2, 2018 it was approved for inclusion on the UNESCO list of World Natural Heritages.

Fanjing Mountain has a well-preserved virgin forest, the largest of its kind in Guizhou Province. The area has been designated a national nature reserve by the government of the PRC, and is now included on the UNESCO World Natural Heritage List.

Fanjing Mountain has many outcroppings of rock, most of which have been greatly eroded over time, resulting in odd-shaped eccentricities, sheer cliffs, and narrow precipices.

There are some stone pillars here and there, survivors from generations of erosion. There are also some caves, home to stalactites and stalagmites.

The mountain has eight major streams etched into its slopes, some of which produce raging rapids, as well as countless small brooks.

Due to its pristine state, the area around Fanjing Mountain is prime habitat for a number of plant and animal species.

There are altogether more than 800 plant species in the reserve. Among them 15 are under protection, including the dove tree (with flowers in the shape of a dove) and the Chinese tulip tree.

The Old Golden Summit is 2,493 meters above sea level. When observed from a distance, it looks like the kind of rice steamer used by farmers.

Around the Old Golden Summit there are lots of strange and magnificent views, such as the Book Scrolls, the Mushroom Stone, the Eagle Rock and others. Besides the fantastic views from the summit, many temples are located there.

This special mushroom-shaped rock sits on the summit, and is now an icon of Fanjing Mountain. It is 9.4 meters tall, and about 1 billion years old. Many artists have created work based on the Mushroom Stone.

The New Golden Summit is 2,336 meters in altitude. If you are lucky enough, you will see the peak surrounded by carnation-colored mists which symbolize the blessing of Buddha.

The top of the summit is on the other side of a gorge and connected by an arched stone bridge. Two temples are on separate crags of the summit: Shakyamuni Temple and Mile Temple.

The name "Fanjing" means "Pure Buddhist Land". In its heyday, the mountain was home to 4 emperor temples and 48 active temples, though only a few of these remain today. Some of the largest temples are near the summit of the mountain, and the scenery around is very spectacular.

Fanjing Mountain has different kinds of scenery in different seasons:

In traveling to Fanjing Mountain, you can either take a cable car up and enjoy the scenery, or scale the 8,000 steps by foot and reach the summit that way. You can choose between the south and west routes.

You can climb Fanjing Mountain starting from Jiangkou County. There are two ways of reaching the summit: Climb 8,000 steps all the way up, or ride a cable car most of the way.

From the upper cableway station, it takes another 2 hours to visit the Mushroom Stone and reach the Old Golden Summit. If you want to visit both the New and Old Golden Summits, this requires at least 3 to 4 hours on the mountain. You can choose just one, or neither, depending on your physical condition.

You can climb Fanjing Mountain starting from Yinjiang County. This route is easier, but still a big challenge, and there is no cableway. The road from Tongren to Yingjiang is much longer than the one to Jiangkou.

Fewer travelers go this way. After traveling around the mountain, you can go down along the 8,000 stone steps or by cableway to Jiangkou. In this way, you can cover all the major scenic spots, and never retrace your steps. If your time and physical condition permit, this can be a plan B during peak season.

Ask your travel consultant or guide for advice on the travel routes. Also let your guide help you avoid the crowds during peak season.

From Guiyang, the capital of Guizhou Province, travelers can reach Tongren directly by high-speed train. There are about 19 trains a day from Guiyang North, and 3 from Guiyang East Railway Station to Tongren South Railway Station. The journey only takes about 1 to 1.4 hours. Travel by car is another option, though that will take about 5 hours.

Check Guizhou Transportation to see how to reach Guiyang.

After arriving in Tongren, you can take a taxi to Jiangkou county town, from where you can visit Fanjing Mountain by the south route. The journey takes about an hour. If you prefer to use the west route from Yinjiang County, you will need to ride a car for at least 2 hours.

Lack of English could be a challenge, but a guide could help you solve that problem.

The weather is changeable at the summit, and the temperature can drop about 8 to 9°C from the foot of the mountain to the peak. So no matter when you go, some long-sleeved clothes are needed.

The district has lots of rainfall, so it is best to prepare some rain gear. The wind is sometimes strong, and a raincoat may be more practical than an umbrella.

The mountain paths are sometimes slippery, especially after rain and in winter. A good pair mountaineering shoes is highly recommended. Watch your steps on the mountain!

Climb Fanjing Mountain with Us

Discover the beauty of Fanjing Mountain

If you love and want to explore nature, check the following itinerary encompassing Fanjing Mountain, as well as many other attractions in Guizhou and Zhangjiajie:

Check out our other Guizhou tours and Zhangjiajie Tours for ideas. All itineraries can be modified according to your requirements!

Or, you can customize your own tour.