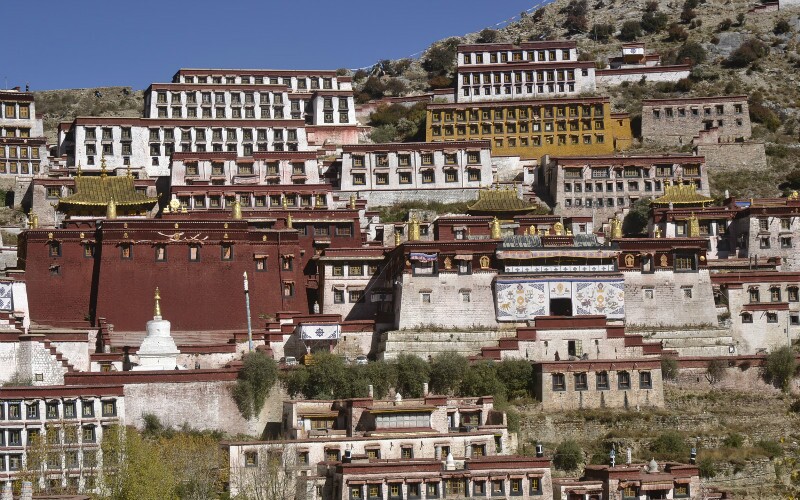 Ganden Monastery was founded in 1409 by Tsongkhapa, the originator of the Gelugpa, or Yellow Hat, branch of Tibetan Buddhism. It is one of the three principle Gelugpa monasteries in the Lhasa district.

Ganden is listed as one of Tibet' s cultural relics, under the special protection of the State. During the Tibetan Rebellion of 1959 and the Cultural Revolution, Ganden was badly damaged.

Special funds have been provided since the 1980s by the state for its reconstruction.

Ganden consists of many temples and other buildings. Ganden covers an enormous area, as building continued for generations. One building called Cuoqin Vihara has 108 pillars and is large enough to house 3500 monks.

It contains the beautiful and skillfully carved bronze statues of Maitreya (the future Buddha) and Tsongkhapa. The throne of Tsongkhapa and his collection of Tibetan status can also be found there.

Chituokhan Buddhist Temple is one of the earliest buildings of Ganden Monastery, where Tsongkhapa and successive Ganden abbots lived. As the abbot of Ganden, Tsongkhapa preached Buddhism and wrote many books.

The Seventh Dalai Lama added an ornate golden pinnacle to the building. The temple contains many Buddhist Sutras, ancient codes and other personal belongings of Tsongkhapa.

Yanbajian Hall is a large four-story building with 72 pillars. Building began in 1409 and finished in 1416. A golden pinnacle was added to the hall in 1610 by the fourth Panchen Lama.

The outside garden contains the stupas (mound-like structures containing Buddhist relics) of successive abbots. Inside the hall is a suit of armor belonging to Chinese Emperor Qian Long, who presented it to Ganden in 1757.

It is one of Ganden' s highly-prized treasures. The suit bears an inscription, written in Han, Manchu, Mongol and Tibetan, showing the Qing Emperor’s respect for Buddha.

Shidoukhan Palace contains the stupa of Tsongkhapa, and marks the place where he died on October 25, 1419. In the following years Dama Bergin, a disciple of Tsong Khapa, built a silver stupa in his honor.

In later years, the 13th Dalai Lama rebuilt this stupa in gold.

Hiking from Ganden Monastery to Samye Monastery is one of the most popular routes in Tibet. This tour takes in lakes, beautiful alpine forests and meadows, as well as two centers of Tibetan religious culture.

See more on >>Hiking from Ganden to Samye.