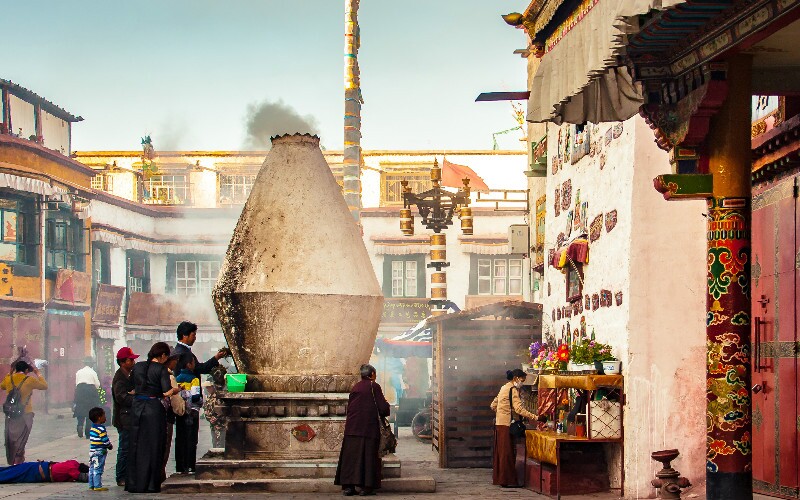 Lhasa Travel Guide - How to Plan a Trip to Lhasa

Lhasa, the capital and spiritual heart of Tibet in the west of China, sits at an altitude of 3,650 meters (12,000 ft) and has a history of over 13 centuries.

Its Tibetan name means "The Land of the Gods". With more than 3,000 hours of sunshine annually, Lhasa is also famed as "The City of Sunshine".

The unique geography of Tibet attracts a lot of tourists to come and explore its stark serenity. Lhasa is the best choice to first stay to acclimate before you start to discover areas with a higher altitude.

Now, just read on to find what you can expect in this highland city and to get some useful travel advice.

The Highlights of Lhasa

There are many historic sites and famous relics in the city proper and its suburbs...

The Royal Palace and Garden

You will discover the history of the former Tibetan kings and Dalai Lamas by visiting the Potala Palace and the royal garden of Norbulingka.

Potala Palace on the Red Hill

Buddhist Temples and Monasteries in Lhasa

Discover the Tibetan Buddhism culture by observing and meeting the monks and believers in temples and monasteries. The architecture, Buddhist iconography, and countless artworks are wonderful examples of Tibetans’ culture and art.

Most Tibetans have devoted Buddhists. After visiting the palaces and monasteries, the streets in Lhasa are the place to get closer to local people and see their way of life.

The Best Time to Visit Lhasa

The best time to travel to Lhasa is from May to October, as it is warmer with more oxygen.

Even in summer, the temperature has large differences between day and night. Prepare enough clothes to keep yourself warm. Also, sunglasses, sun cream, and hats are necessary to prevent sunburn.

Lhasa's high altitude may give you a headache or uncomfortable feelings. So, prepare well before departure and do not do over-exercise after you arrive. >>See more on How to deal with Altitude Sickness.

To gain entry to Lhasa you’ll need a Tibet Entry Permit with an approved Chinese travel agency, to travel outside Lhasa you may need further permits, and so on... >>See more on  Important Tibet Travel Restrictions.

Be Respectful, Culturally Aware, and Well-Prepared

Did you know that when you visit temples and other religious sites, normally you should walk round clockwise to be respectful?

In 641 AD, Songtsan Gampo, the leader of the Tubo tribe, had conquered the whole Tibetan region and established his Tubo Kingdom. He had wedded Princess Wencheng of the Imperial Tang Dynasty.

Under the suggestion of Princess Wencheng, a grand temple was built above a lake named Wotang. As the lake was filled up by earth carried by white goats, the temple was given the name Lhasa, meaning 'goat and earth' in Tibetan.

Later, this imposing grand temple became a symbol of the kingdom. People started to call its surrounding area Lhasa, and the temple is now known as Jokhang Temple.

As Lhasa became the focus of faith for the Tibetan population, it became the "Mecca" of Tibet, and Jokhang Temple its Kaaba.

Unlocking Lhasa with Us

With a 100% Travel Permit Guarantee and expert local guides, we will provide you a professional service and an unforgettable travel experience. Here are some sample tours we recommend:

Tell us your interests and requirements, and we will create your own unique tour.