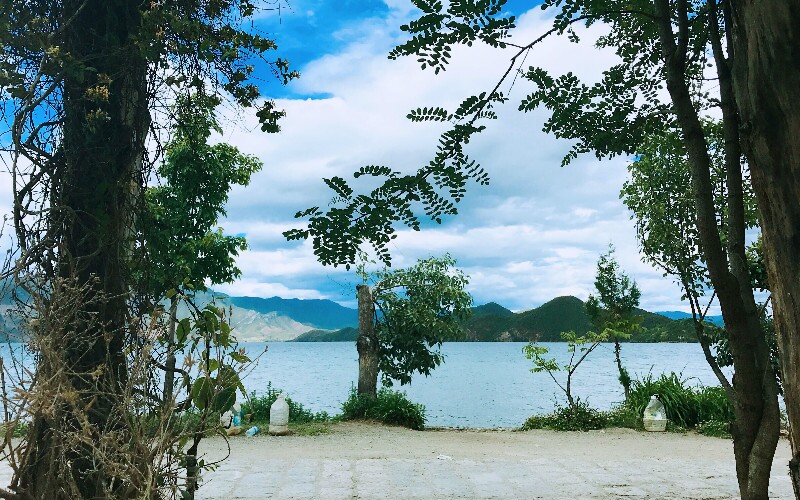 Lugu Lake, at the border of Sichuan and Yunnan provinces and about 200 kilometers (124 miles) from Lijiang city, is an alpine lake renowned for its stunning scenery and unique Mosuo culture.

Lugu is called "mother lake" by the local Mosuo people. The Mosuo are one of China's unusual ethnic groups. They've sometimes been described as the last matriarchal society in the world. The Mosuo people have been living relatively isolated lives around the lake for generations, and they have retained their ancient traditions and customs. 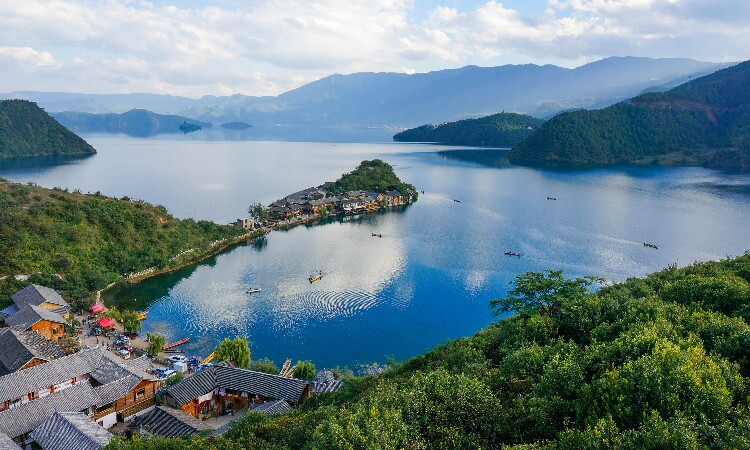 Dotted with islets and surrounded by high mountains, Lugu Lake is an idyllic beauty spot not yet overrun by tourists. The water is clear and clean and the surroundings are peaceful and beautiful. You can just relax and slow down there. In 1924, American explorer Joseph Rock came to Lugu Lake. He said: "It is the most beautiful lake in Yunnan. You can't imagine a more wonderful environment than this. The deep blue water of the lake is as clear as crystal. The islands were like ships floating the calm sea. Everything was quiet. It's a fairyland.”

At 3,754 meters (12,316 feet) above sea level, Gemu Goddess Mountain is the highest peak around Lugu Lake. In Mosuo people's minds, this mountain is an incarnation of the Goddess Gemu.

Every year on the 25th of the 6th lunar month (in July/August), Mosuo people will go there to worship the Goddess Gemu by consecrating food, burning incense, and kowtowing to pray for a good harvest, blessings, and happiness.

Liwubi Island, Lige Island, and Rock Island (or Xiwae Island) are considered as the three most beautiful Islands in Lugu Lake.

Lige Island is surrounded by water on three sides and situated at the foot of Gemu Goddess Mountain. The sunrise there is amazing.

Liwubi Island is the largest island in Lugu Lake. The Mosuo dwelt on it during their earliest years there. There is a Lama Temple. On every Tibetan festival or Buddhist festival, the religious people along the lake will go there to pray.

Joseph Rock lived on Rock Island for 8 years. The island is flourishing with vegetation. The largest tree there was planted by Rock in the early 1920s. Now it is a first class protected plant in the Lugu Lake Scenic Area. Caohai is a lake area covered with thick reeds. Covering an area of 10 square kilometers (4 square miles), it is like a piece of jade inlaid in the east of Lugu Lake. Mosuo girls paddle their boats through the reeds with melodious Mosuo songs.

There is a romantic bridge across on Caohai Lake named Walking Marriage Bridge. It is the place where Mosuo people date each other.

In addition to the above scenery, Lugu Lake has more to explore. If you have an interest in Lugu Lake, contact us. We're ready to create a trip for you.

The Lugu Lake area is home to various minority groups, such as the Yi, Tibetans, Pumi, and Mosuo. The Mosuo are why most tourists visit the lake area. The Mosuo are the most numerous people around the shores, and though there are no clear census figures, perhaps about 50,000 Mosuo live around the lake and tens of thousands more are scattered in pockets in other valleys.

Their neighbors are about 30,000 Pumi who mainly live in the mountains around the lake. They and the Pumi share similar languages with the Naxi, but their customs and clothing are different.

The Mosuo are known for their unique matriarchal society and "walking marriage".

Known as "the Kingdom of Women", the Mosuo are considered a matriarchal society although men generally have the political power. Mosuo women wield power in the families and control household finances. They take care of the crops, the house, and children. Mosuo men take care of the livestock. Houses and property are passed down through the women. Traditionally, the men serve the women.

In Mosuo households, the eldest female dominates the daily lives of those in the household. The women control the property.

Festivals: The Musuo are generally Tibetan Buddhists, so their festivals are mainly from that religion. But they also have an ethnic festival called the Zhuanshan Festival.

Perhaps the strangest feature of Mosuo society is their marriage traditions. They actually have at least three forms of marriage and relationships. One of them is more similar to Western marriage. The Mongols once ruled and lived in the area, so many people practice what they call "one on one" marriage similar to Mongolian customs. However, the form of marriage that seems strangest is what they call "walking marriage".

In general, the Mosuo are known for being a people where the women don't marry. They have a matriarchal social system where one woman may have several male partners. If the woman chooses, she may select a man to live in her mother's home.

Most couples do not actually marry. The men might stay with their extended families during the day, and at night, they might walk to the houses of the women and then return to their own homes in the morning. Women may have multiple partners over the course of their lives.

Children are raised by their mother. The mother's brothers take on the responsibility of fatherhood in many households. The children often don't know who their real father is. It is said that the ancestors of the Mosuo were a nomadic people who lived on the Tibetan plateau. They arrived in the area around Lijiang around 3 AD and then divided into three branches.

The people around the high-altitude Lugu Lake region were more isolated and retained more of their traditional customs and religion.

The Mosuo are not included in China's 56 ethnic groups. The Mosuo people who live in Yunnan are classified as Naxi and those living in Sichuan as Mongols.

More than about 1,000 years ago, the Nanzhao Empire ruled the Yunnan region during the Tang Dynasty era (618–907). Then the Bai people rebelled against the Nanzhao rulers and started the Kingdom of Dali (937–1253) that ruled the area.

From the Bai people descended the Naxi in Lijiang and other groups. The Mongols ruled the area as part of the Yuan Empire (1279–1368) and intermarried with the locals.

This is why the Bai, Naxi, Mosuo, and Pumi speak related languages. But their customs became quite different.

Unique Experiences You Could Try at Lugu Lake 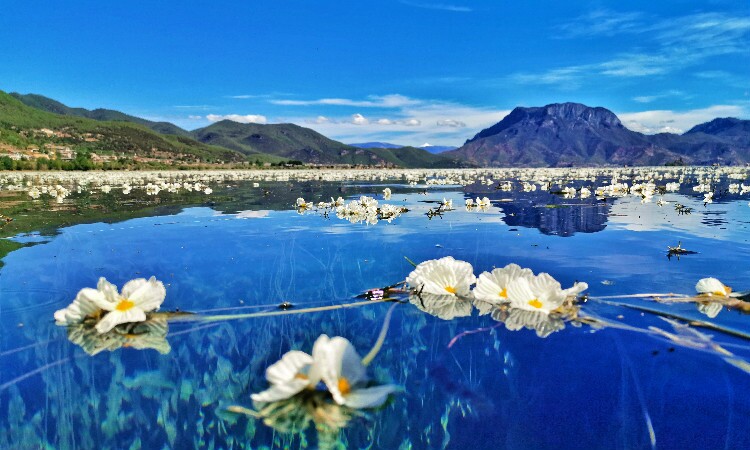 The best-known villages around Lugu Lake are Luoshui and Lige. Both are now well endowed with tourist facilities. Apart from guesthouses, restaurants and cafés, however, you can still experience many interesting ethnic things in the villages.

Take Part in a Campfire Party

In Luoshui and Lige, you may have a chance to take part in a campfire party convened by local villagers. You pay about 30 yuan to join in. Even if it's not as authentic as it once was, it is still a good way to relate to local people and to experience their way of life.

Take a Boat Ride on the Lake

On the lake there are five islands, three peninsulas, and a sea-wall islet. Boating is a good way of exploring the lake. Local boats are made from thick logs and are known as zhucaochuan (/joo-tsao-chwan/ 'pig trough boats').

You can charter a boat to see the beautiful lake scenery and enjoy a leisurely morning or afternoon.

Pay a Home Visit to a Mosuo Family

If you want to have close contact with local Mosuo people, we can arrange a home visit. You can see their house, talk with the family, and even eat with them. It is a great way to get to know about their daily lives and learn about local folk culture. 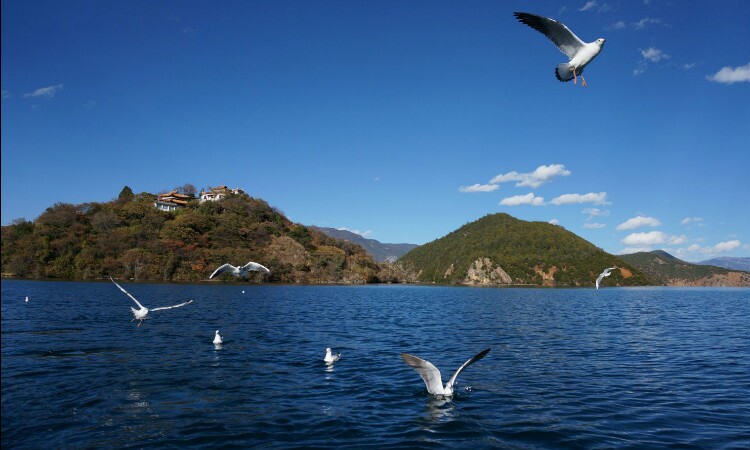 The best times to visit Lugu Lake are when the weather is sunny and mild, from March to October. While the rainy season extends from July to September, the rainfall generally does not last long.

Lugu Lake has abundant sunlight and doesn't freeze all year around. You could enjoy different kinds of beautiful scenery throughout the year.

How to Get to Lugu Lake

Transport from Lijiang: Most people reach Lugu Lake from Lijiang by minivan or hire a car. The ride takes 6–8 hours; usually leaving Lijiang around 6am and arriving at the lake around 1pm.

Transport from Kunming: A domestic airport was built in Ninglang, the county west of Lugu Lake. Ninglang Luguhu Airport is a 40-minute journey south of Lugu Lake (32 km/20 mi) by car. A direct flight from Kunming to the lake's airport is available. It takes about 1 hour and 15 minutes.

Public transport is not convenient around Lugu Lake, so we highly recommend booking a hassle-free private tour with private car and local guide. Feel free to contact us if you are planning a trip to Lugu Lake.

Tour Lugu Lake with Us

Lugu Lake is a place full of ethnic culture. You are recommended to visit it with a professional guide. If you are interested in Lugu Lake, we can add it onto your itinerary.

If the above tours are not what you are looking for, contact us. We will create a trip based on your group size, time, interests, preferences, and other requirements.