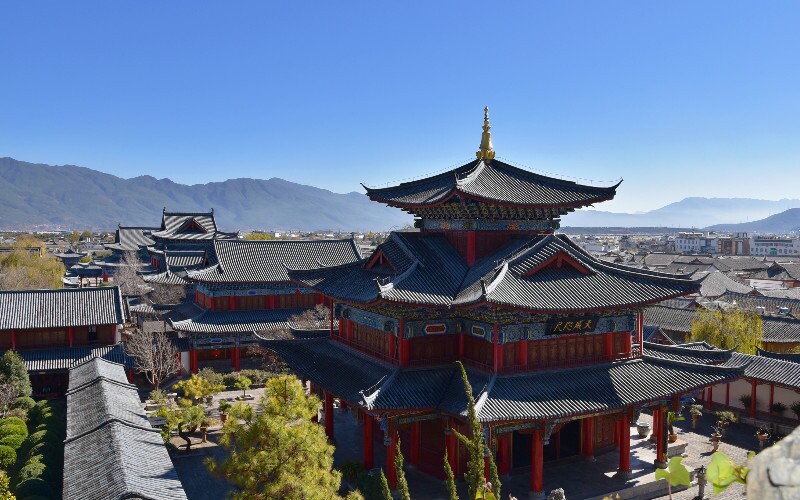 The original building covered twice the surface area, and it was constructed so grandly that it was said that it looked like a palace that could rival the Forbidden City of the Qing Dynasty. This was a punishable infraction in those days that might have invited retribution.

The present structure is built half the way up a hill in the middle of the Ancient City of Lijiang. It is on the eastern side, and it receives the morning sunrise light and is shaded in the evenings. It affords a good view of the surrounding city of Lijiang. This and the recreation of various architecture styles of the Ming and Qing eras and the Naxi artwork and decorations make the place a popular site in Lijiang City in Yunnan Province. The present wooden complex and its gardens cover about eight acres. Visitors can walk around on the walkways and climb up and down the stairs and see the scenery and the interiors and courtyards.

Tea is served to taste in a certain courtyard, and people can buy beverages and alcoholic drinks. The azalea and orchid gardens are particularly impressive and are a place to sit and rest for a while. At the top of the complex, there is a Daoist temple, and Daoist fortune tellers are there for hire.

Generations of the Mu Clan once lived at this site as local rulers. An interesting story about one of the rulers who lived when the Manchus were invading the Ming Empire is that he fled to live as a recluse when he was in his 30s.

It is said that 22 generations of the clan lived there until 1723. The palace was destroyed in the 1800's and afterwards. Regular houses were built on the site in the last century.

The present 'Wood Mansion' (木府) is of recent construction. It was built after the earthquake of 1996 between 1996 and 1999. The world's attention focused on Lijiang due to the earthquake. In order to highlight the area, some of Lijiang was designated as a UNESCO World Heritage Site.

The new Wood Mansion was built with loans from the World Bank that funded the project. The dwellings on the site were torn down, and the park building was built in their place. The original Mufu wasn’t recreated. It is said that the whole original complex contained about 100 buildings and covered 16 acres. What was built now covers an 8-acre area. Enjoying the complex may take two hours. You can see it as part of a tour of the nearby 33 meter (108 feet tall) Wangulou Pagoda and Lion Hill Park. If you are visiting Wangulou, exit the Lion Hill Park from the south exit, and you'll come right to the back entrance of Mu Palace. It is in the southwest side of the Ancient City section.

Walking there: Since the Mufu complex is in the Ancient City section and vehicles are not allowed in because its a pedestrian area, the best way to reach it is to hoof it. Walking there should take about 15 minutes once you get inside the Ancient City district. It is on Shizishan Hill in a tree covered park. You can walk down Pedestrian street towards it.