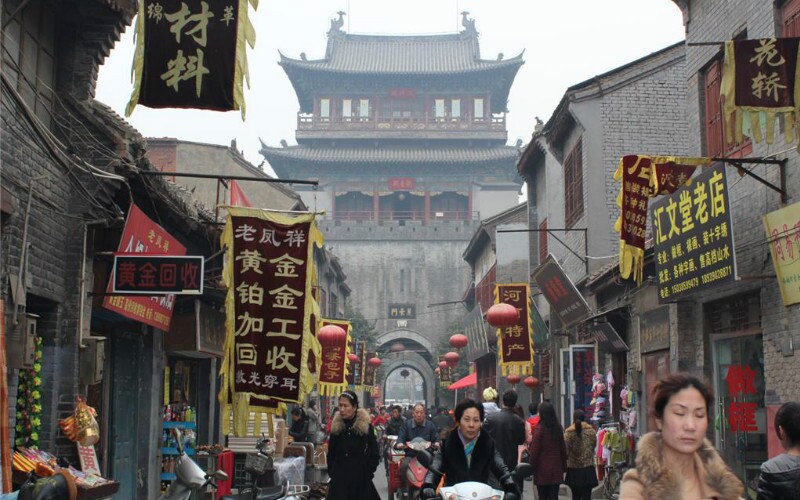 Where to Buy Tri-colored Glazed Pottery of the Tang Dynasty

Zhao Bingyan copper whistle is named after its creator Zhao Bingyan. It is a famous traditional product of Luoyang City. The whistle is 78 millimeters long and 17 millimeters wide. The air hole is 4 to 6 millimeters wide. It is made of fine copper and the small ball inside the whistle is made of qualified cork. It is beautiful in shape with smooth lines. If you blow it lightly, the sound is low and soft. If you blow it hardly, the sound is loud and sonorous. As the best choice for students taking exercises, army training and outdoor activities, it sells well home and abroad.

The plum jade is also called Ru Jade. It is produced only in Ruyang County, Luoyang City. It is named plum jade as there are colorful patterns of plum blossoms in the jade. During the condensation of the volcanic rock that develops into the plum jade, large amount of air form many blowholes in the shape of the almond in the rock. The blowholes are filled by many minerals later. When they are filled by the agate with iron, they look red. When filled with the allochite, they look yellow and green. When filled with the chlorite, they look dark green. When filled with the calcite or quartz, they look white or become transparent. After the jade is polished, the blowholes with all kinds of minerals form the pattern of the plum blossom. The handiwork of plum jade includes jade pendant, ink stone, pen container, tea set, coffee set and jade bracelet etc.

With a history of more than 2000 years, Luoyang embroidery is the traditional artwork of Luoyang City. The major raw material of Luoyang embroidery is textiles like the flax. It is weaved in unique technique with the help of some pharmaceuticals. The patterns are mainly people, flowers, birds, animals, landscape and gardens etc. It is bright in color and skillful in craftsmanship.

It is said that after Guangwu Emperor of the Dong Han Dynasty set the capital in Luoyang City, the palace was decorated with colorful lanterns to celebrate the unity of the country. Banquets were also held in the palace to thank the ministers and officials. Thus the lantern is named Palace Lantern. Later the craftsmanship of the palace lantern permeates among the ordinary public. There are great varieties of Luoyang Palace Lantern. The most commonly seen ones are white square lanterns, red round yarn lanterns, dragon head lanterns with six colors, butterfly lanterns, lanterns with the pattern of two dragons playing with a ball and arhat lanterns etc. Among them the red yarn lantern is more famous than any other one. It is beautiful in design. Both calligraphy and paintings can be done on it. The lantern can be easily fanned out and folded. Thus it is easy to keep. The lantern is rich in local characteristics.

Shopping Place for Gifts and Souvenirs

Luoyang Ancient Street (洛阳老街) is a unique street with buildings beside the street built in Ming and Qing styles. In this street, visitors not only buy some featured articles for gifts or souvenirs, but also can relish various kinds of local snacks.

Shopping Place for Clothing and Cosmetics

There are many shops offering clothing, shoes and bags and so on, both with famous brands and nameless brands. Inside the marketplace, there are many shops providing food. In basement 1, it is a Carrefour, visitors can buy products for their daily life in this large-scale supper market.

It is a comprehensive department store providing clothing, bags, cosmetics and cases and so on with various brands. There is a supermarket on basement 1, where visitors can do some shopping for their daily life.

Services for shopping, entertainment and eating are all available there. Visitors can buy various kinds of clothing and cosmetics, enjoy themselves in KTVs and cinemas.

It is a supper market selling cosmetics, skin care products and articles for beauty.