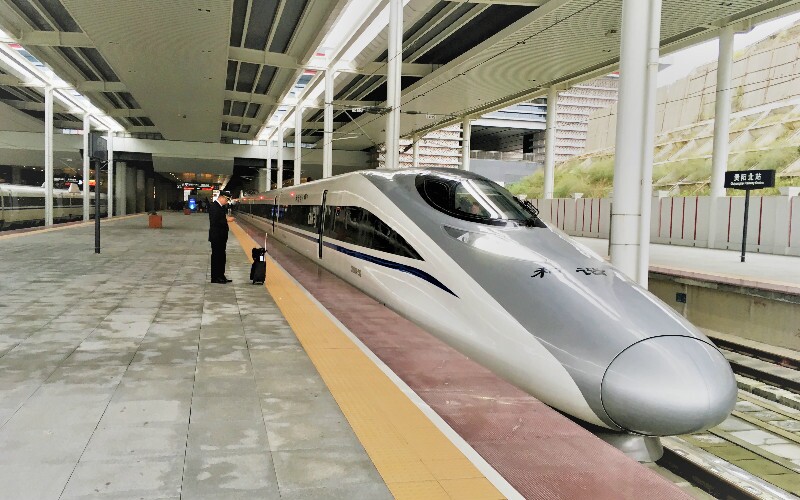 Luoyang is a relatively small city in China. It is accessible by airplane, train, and long-distance bus. Luoyang has direct flights to some large domestic cities and direct trains/buses to most cities.

How to Get to Luoyang by Air

Luoyang Beijiao Airport (airport code: LYA) is an important air hub in Henan Province. There are some direct flights to and from major tourism cities, likesuch as Beijing, Shanghai, Guangzhou, Chongqing, Hangzhou, and Guilin.

If there is no direct flight from your city, such as Hong Kong, consider taking a connecting flight at Beijing, Shanghai, or Guangzhou. Alternatively, you can take a flight to Xi'an and then travel to Luoyang by bullet train.

Luoyang Beijiao Airport is located in Mengjin County. It is 13 kilometers (8 miles) northwest of downtown Luoyang. The airport shuttle bus and city buses 27, 83, and 98 go from the airport to the downtown area. If you take a taxi, the cost is about 40 yuan.

We advise you to choose a private tour. We will provide a collection service whenever you arrive at the airport. You will travel in a comfortable car and an experienced guide will accompany you to solve any problems that may arise during your tour. You won't need to worry about any transportation issues.

Most people travel to Luoyang by HSR.

How to Get to Luoyang by Train

Luoyang's significant role as a major stop along the Lanzhou – Shanghai rail line makes train travel the most convenient way to reach Luoyang. Luoyang is accessible by train from most cities in China, such as Beijing, Xi'an, and Zhengzhou. If your city is near Luoyang, such as Xi'an, traveling by bullet train is recommended.

There are two main railway stations in Luoyang:

Luoyang Railway Station is 13 kilometers (8 miles) away from Luoyang Longmen Railway Station. It will take about 35 minutes by car and 1 hour by bus.

How to Get to Luoyang from Xi'an

There are no direct flights from Xi'an to Luoyang. You have to transfer in Xining, Guiyang, or Chongqing. You'll spend hours in transit, or even a day in the transit city, which is inconvenient. We don't recommend flying to Luoyang from Xi'an.

Alternatively, you can take a normal train. It takes 5 hours to get to Luoyang. It costs less than traveling by bullet train but the environment on a normal train is not as good and it will take longer to reach your destination.

See our Day Trip from Xi'an to Luoyang and Shaolin Temple in Zhengzhou by HSR.

Xi'an is 373 kilometers from Luoyang. The journey takes 5 hours by long-distance bus. The buses depart from 8am to 5:40pm, and the ticket price is about 100 yuan.

How to Get to Luoyang from Zhengzhou

Zhengzhou is 136 kilometers from Luoyang. The journey takes 2–3 hours by long-distance bus. The buses depart between 6:40am and 7:30pm, and the ticket price is about 50 yuan.

The Luoyang city transportation options are not as good as in some large cities, such as Beijing and Shanghai. Taking a bus is the most common way to travel. You can visit scenic spots by bus. Sometimes these buses will be crowded.

The other way is to take a taxi. You can easily flag down a taxi in Luoyang. Most drivers don't speak English so it's a good idea to show the driver your destination in Chinese. When you take a taxi, please be sure to use the meter. Some drivers may have a habit of bargaining rather than using the meter and may try to scam tourists who generally don't understand the currency, the travel routes, and other ways of being tricked.

Hiring a bike is another option in Luoyang. It is a good way to travel in the downtown area but the distance between each scenic spot in Luoyang is far. Biking is not a good choice if you want to visit attractions that are a long distance away, such as the Longmen Grottoes, White Horse Temple, and Guanlin Temple.

What we recommend is private transport. Compared with buses, it can save your time and is efficient. It can also ensure your safety and you won't be scammed. Our private transport (with a guide for all your questions and translation needs) offers a far more reliable and fulfilling alternative to taxis.

A private car will ease your transportation issues.

Ease Your Transportation Issues in Your China Tour with Us

If you are planning a tour to Luoyang and worrying about the transportation, you can make an inquiry here for free. Luoyang transportation is optimal with us — we help you avoid all the issues related to public transportation in Luoyang.