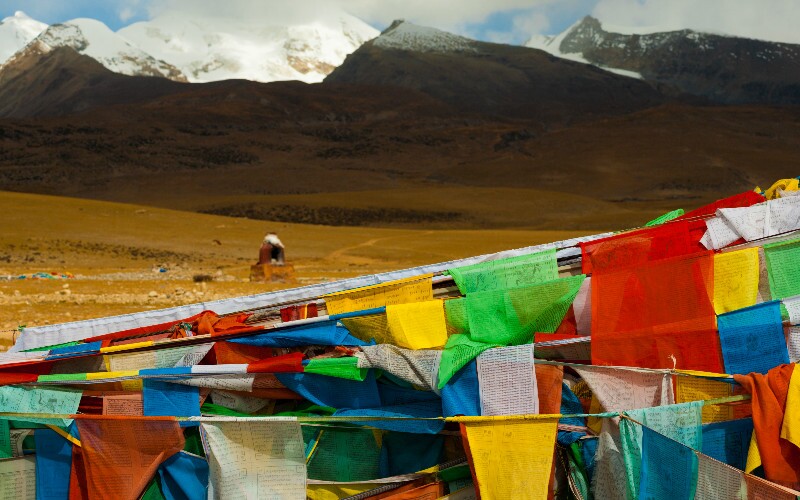 The Changtang Grassland in Nagqu, Northern Tibet is some of the most beautiful high desert in the world. With sheer crags, verdant prairie and pristine turquoise lakes, these vast highlands extend 1,600 kilometers (1,000 miles) from West Tibet to Eastern Ladakh. The Changpa nomads have lived in this harsh and unpredictable area for thousands of years, and have created a colorful, friendly lifestyle that visitors from all over the world appreciate.

The Changpa, or northern nomads, roam freely throughout the Changtang Grassland. Because the land is not suitable for farming, no farmers are vying for space. These nomadic pastoralists depend on their livestock for their living. They move in established routes that are followed each year allowing the wealthy to have more permanent corrals and buildings in some encampments.

They change pastures to take advantage of the growing seasons of the grass. This huge pasture land is covered with Naza grass which is very high in protein, and for this reason, the sheep, yak and other animals that call this vast pastureland home are strong and healthy.

To help with their income during the seasons the grass is dead, they convert milk into cheese and butter during the summer. They trade meat, salt, wool, unprocessed cashmere and live animals for other things they need such as grain, metal tools, cooking pots and other modern equipment.

The people of the grasslands brighten up the stark surroundings with colorful clothing, tents and jewelry. They sing haunting melodies as they travel from camp to camp and the women wear vibrant apparel.

Every year in August they have the Nagqu Horse Racing Festival where the women wear brilliant traditional costumes and jewelry. It is a huge gathering for local people to enjoy sport, trade and art. The herdsmen also don festive costumes and sing and dance to celebrate their prosperous lifestyle. Later, there are feats of horsemanship, the narration of their local epic, Gesar, a Gorchom circle dance and a fashion show of Changtang costumes.

Today, some historians and archeologists propose that the Zhang Zhung culture was the forerunner of the ancient culture on the Changtang plateau. The Zhang Zhung kingdom and culture existed long before Tibetan Buddhism came to the area.

Visitors to the area may see hilltop citadels or forts, burial complexes with vertical tombstones, some with up to 10,000 graves, stone temples in the mountains, royal tombs and petroglyphs which depict a horse warrior culture. These findings have characteristics that are similar to Iron Age cultures in Europe rather than from East Asia.

The Changtang Grassland is surrounded by the Kunlun, Kangdese, Tanggula and Nyainquetanglha mountains. The Black River and the Nujiang River irrigate the grassland.

The Tsomoriri is one of the highest lakes in the world situated between 4,000 and 5,000 meters above sea level. It is 120 square kilometers (46 sq mi) and its maximum depth is 40 meters (131 ft). Travelers may visit the lake only during the summer. The water is brackish today, but in ancient times it was salty and the nomads used to extract the salt for their own use as well as for trade.

Designated as a Ramsar site in 2002, it is among the wetlands of the world that are considered of international importance with extensive marshes on the northern side. Snow leopards and grey wolves are reported in the area as well as many other mammals and water birds. The black-necked crane is endangered, and there are other rare birds to be seen.

Pangong Tso is a lake at about 4,350 meters above sea level, and is still salty. In spite of that, it freezes completely during the winter. It may also be designated a wetland of international importance under the Ramsar Convention. If so, it will be the first one in South Asia that crosses the boundaries of two countries, which are China and India.

Even though there are no fish in the lake and very low micro-vegetation, there are small crustaceans, and a lot of water fowl. It is also a breeding ground for migratory birds including the brahmini duck and bar-headed goose.

Rare animals live in the northern part of the Changtang Grasslands including the white-lipped deer, bharals, wild yaks and many more. Forty species are protected by the government.

The Changtang Cold Desert Wildlife Sanctuary covers vast plateaus and deep gorges from altitude 4,300 meters (14,000 feet) to 5,800 meters (19,000 feet) in part of the Hindu Kush. It contains the River Indus which rushes through the sanctuary dividing it into two parts.

There are 10 marshes and 11 lakes, and it is one of the only places where the Tibetan wild ass can be found. There are also numerous glaciers and hot springs.

The best time to be in the sanctuary is between June and September. The best time to visit Changtang is in August, when the temperatures get up to 7 to 12oC (45 to 54oF). The views of the surrounding peaks are spectacular and there are gentle winds, mild sunshine and lush grass.

At China Highlights, tours of China can be tailor-made for each traveler or group, so you can get the opportunity to see exactly the sites you have always wanted to see.

A visit to the Changtang Grassland can also be included in tours during the summer months. When you see the vast, stark beauty of the grassland, surrounding mountains and lakes, we are confident you will find it is an experience you will never forget.