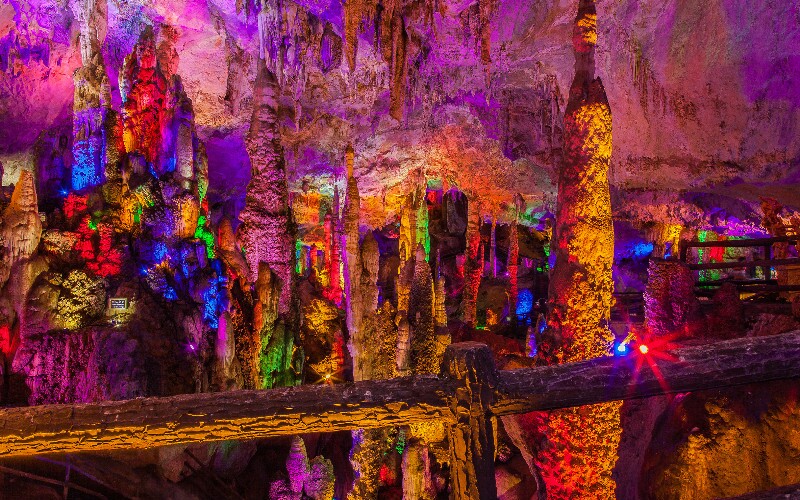 Yiling Cave, also called "Gan Palace" in the Zhuang language (which means “a place as beautiful as a palace”) got its name for its location in Yiling village. A national AAA level scenic spot, geologists estimate that Yiling Cave, a karst cave, was formed a million years ago. The cave also looks like a whelk, and has many beautifully shaped stone flowers, pillars, curtains, stalagmites and stalactites, giving visitors different sights at each step. Created with prodigious skill, the sights in the cave are an ever-changing scenery of rare beauty.

During the Kaixi and Jiading periods of the Southern Song Dynasty (1205-1224), a monk called Zhou Shiqing supposedly built a Buddhist convent here and cultivated himself into a fairy. Thus, later generations called Yilang Cave the Fairy-Watching Cave, and they also built Jianxian Temple on the mountaintop. Located in Liangman Mountain, the cave was originally underground, and was then formed from the movement of the earth’s shell. After ten million years, different stalactites, stalagmites and stelaes formed in thousands of postures in the cave to create wonderful, amazing and mysterious views. Like a whelk, the cave is 45 meters in depth, has an area of 24,000 square meters and is divided into three levels that wind and change all the time.

Visitors can gain full knowledge of the culture, history and folkway of the Zhuang minority in the cultural corridor of Zhuang, which was built in this scenic spot.

China Highlights can help you customize a tour to visit Yiling Cave and other highlights in Nanning.

Visitors can get there by taking a coach to Wuming at Anji Passenger Station and getting off at Yilang Cave.