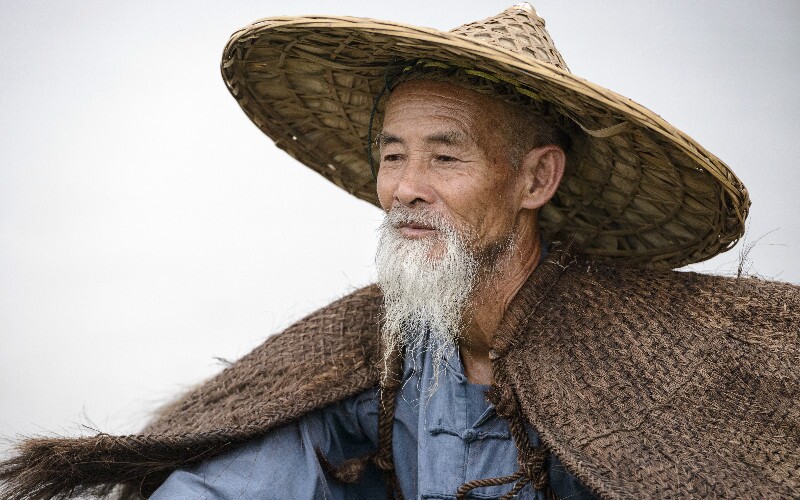 China Fishing Village is a theme park that features the culture and history of the Chinese fishermen of Shipu Harbor.

The fishermen themselves decided to help preserve and showcase their specialized fishing customs by creating a museum-town that would retain the unique structures of the fishing village, and perpetuate its story for future generations of Chinese and foreigners alike.

Those who love to angle themselves will love the opportunity to see how ancient Chinese fished — their boats, equipment, methods. They can even venture out to sea with some of these ancient fishermen's modern descendants to fish with them side-by-side, with permission of course.

Shipu Harbor in Xiangshan County is surrounded by the mainland, Dongmen Island, Duimian Mountain Island, Nantian Island, and Nantang Island; and forms a closed type of bay with five harbor entrances. "The outer sea can't be seen from the inner harbor."

The beautiful fine sands that lie along the shore, the rock formations, the sunrise and sunset over the harbor, and the rolling blue sea waves will all make for an enjoyable scene to every nature lover. The sight of the many boats criss-crossing Shipu Harbor, the birds soaring through the air in the cool breeze, and the fish swimming happily in the colorful coral formations will also add to the view.

Camping on one of the islands that stand between the harbor and the open sea is another great attraction for tourists. 40 km (25 mi) from the beach is Yushan Island, with its amazing reefs, and nearby Tantou Island, with its forests — both top sites chosen for camping.

In September 1933 more than 30 movie artists from Shanghai, such as Chu Caisheng, Nie Er, Wang Renmei, and Sang Hu, took a special trip to Shipu, and shot the outdoor scenes of the movie "Song of the Fishermen".

The narrow, winding streets make their way past numerous colorful, antique-style edifices that bespeak the realities of a time long past and invite the modern eye to behold those ancient ways. Local folk customs are perpetuated, such as praying to the sea and a fishing lantern show.

A store of cheap local seafood, such as the fishermen catch and eat, can be had here by the boatloads. Shipu is one of the largest fishing harbors in all of China, so it is no surprise if the seafood is plentiful and comes in great variety.

In Shipu Village itself, there are plenty of restaurants and gift shops to keep tourists well fed and supplied with souvenirs.

By far the most well-attended annual event is the China Fishing Festival, which is held every year in September and October (and excellent time to travel there). Thousands of fishing boats set out to sea simultaneously for an interesting and camera-worthy moment, besides the other activities.

Avoid, if possible, the monsoons and their aftereffects in June through August, the hot month of July, and the cold month of January. That leaves September through December.

China Fishing Village is located about 130 km (80 mi) South of Ningbo, and can be reached directly by taking a Fishing Village luxury bus from Ningbo's South Coach Station or a Shipu-bound public transport vehicle from many locations in Ningbo.

Further fishing culture can be investigated at the Ningbo Museum and Qing'an Guild Hall in Ningbo. The town also contains Tianyi Pavillion library and garden, the oldest library in China and the architecturally stunning Tianyi Square designed by famous Chinese architect Ma Qingyun.

Just 15 kilometres (9 mi) north of town one can visit the Mahayana Buddhist Baoguo Temple, and just a little southeast is lake Dongqian. The lake should interest fishing tourists, and also can be viewed from Huxin Scenic Spot Wharf. Golfers may wish to visit Delson Green World Golf Club on the south end of the lake.