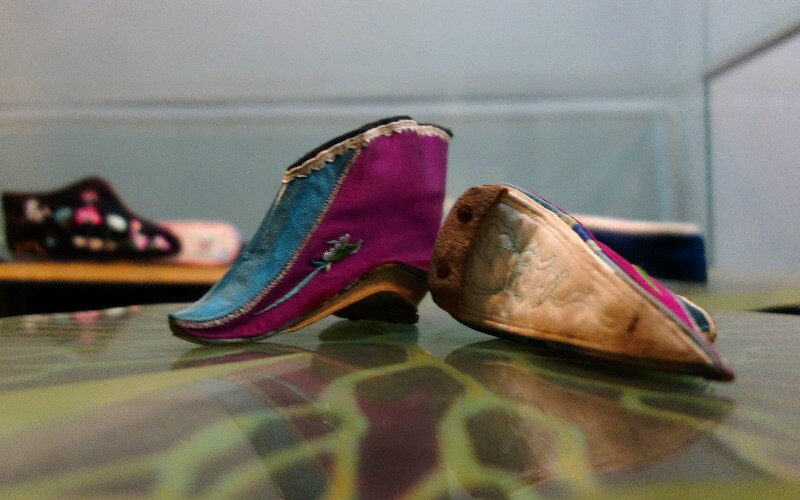 Discover Foot Binding in Shanghai - the Culture of 4-Inch Feet

Shanghai is the best place in China to discover the cruel and oppressive custom of foot binding, which Chinese women endured for centuries in order to woo their husbands with dainty, 10-cm feet.

Chinese women's feet were bound in feudal China. This corrupt custom originated from as early as the Sui Dynasty (581–618), and became popular among people in the Song Dynasty (960–1279). At that time a woman with a pair of small feet was regarded as a beauty. Though it caused severe pain, many women bound their feet to follow the custom.

The Pull to Bind

In ancient times, women's small feet drew so much attention that foot shape and foot size became very important standards to judge a woman's beauty by.

Whether a woman had bound feet or not, and how she bound them, directly affected her marriageability. At that time, every social class saw big feet as shameful and small feet as something to be proud of.

A girl began to bind her feet from 5 or 6 years old. A long strip of cloth was used to bind her four toes (except the big toe) and sole, breaking them off and bending them into the arch of the foot, so as to form a pair of "four-inch golden lotuses".

The pain was hard to imagine, but elders forced young girls to do it, ignoring their shouts and tears, in order to fulfill their responsibilities and guarantee the girl's future - her marriage.

Why Foot Binding Was Popular

There were two reasons behind the foot binding trend: the first was that the rulers' will affected the lives of the people; the second was the seeking of appreciation and praise from well-educated men.

It was said that the practice of foot binding originated from Li Yu, the emperor of Southern Tang Dynasty (937–975), or possibly Emperor Yang of the Sui Dynasty (604–618). In order to please him, his concubines bound their feet into new moon shapes and danced on golden lotuses. Emperor Li Yu praised the feet as perfect, so foot binding became popular in the imperial palace, and later spread to the peasant class.

The trends among the folk class were decided by what the emperor preferred, so as Li Yu and future emperors appreciated women with small feet, foot binding became popular.

Besides the will of rulers, men of letters also influenced social customs a lot. The saying "headwear for the head, foot binding for feet" shows the educated class considered that the head and feet were the most important parts of a beauty. We can see it from their lavish descriptions, praising bound feet as "golden lotuses", "fragrant hooks", etc.

The Shoes of "Four-Inch Golden Lotuses"

Three-cun-golden-lotus shoes were specially made in China from the Tang Dynasty to more than 1,000 years later. Chinese women with bound feet all wore special small shoes.

After 1911, the imperial feudal system collapsed, and women didn't have to bind their feet any more, but still some women were unwilling to change their habits, which meant there were a great number of women with small feet even after liberation. Some factories and companies did volume production of the shoes to meet the needs of the special group. However, with the development of society, foot binding gradually decreased, and the shoes lost their market.

In 1999, the owner of the last lotus-foot shoe factory in Harbin sent its golden lotus shoe tree to a museum for preservation. There are 125 shops lining the 200-meter street, selling artware like the "scholar's four jewels" (writing brush, ink stick, ink slab, and paper), painting and calligraphy, clothes, and three-cun-golden-lotus shoes. You can feel close enough to touch to the Chinese culture of small feet by holding Dongtai Road's small shoes and other authentic objects of the period.

Bailvtang is a small personal museum in Shanghai, but it is the biggest ancient shoe museum in China.

First built in 1992, it is famous in China. Its owner is Yang Shaorong. His 20-square-meter hall is the exhibition area of the museum. Though it is not big, rows of colorful ancient shoes will catch your eyes when the curtains on the four walls are opened, all of which were collected by Mr. Yang over decades of collecting.

More than 1,500 shoes for "three-cun golden lotuses", ancient women's shoes, men's shoes, and kid's shoes of different patterns and from different places and ages are displayed there. More than 1,000 pairs are four-inch-golden-lotus shoes. The smallest are only 9 cm long and the biggest are 19 cm. These shoes systemically show you the development and history of China's shoe culture.

Apart from shoes, the collections in the museum include strips of foot binding cloth. During the visit, the curator Mr. Yang will tell you some authentic anecdotes and stories he heard while collecting, which will make possible a zero-time-distance contact with small feet culture.

Our flexible Shanghai tours can easily accommodate an excursion into the past to touch the exquisitely painful world of bound feet. Start by inquiring about a tour and customize it, or contact us and we'll tailor-make a trip to suit your requirements.