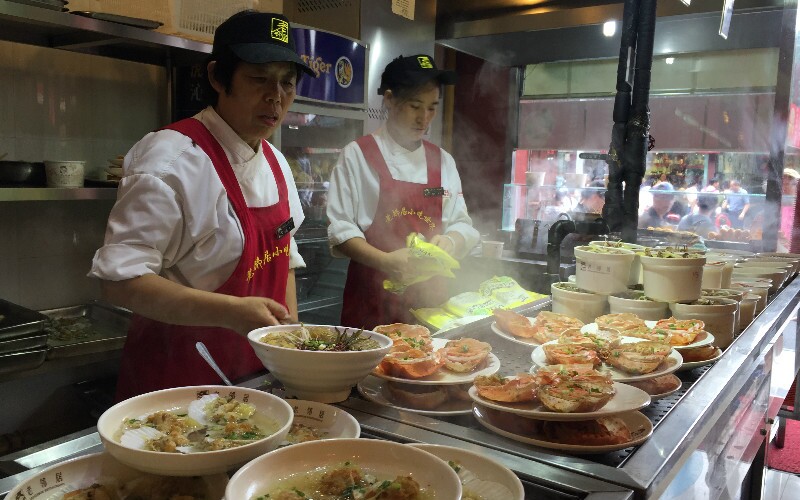 How to Eat Like a Local in Shanghai by Night

Having given you an idea of what the average Shanghainese person eats during the day in part one, food at night offers something different, so if by now you've had enough of Shanghainese food and started craving pizza then don't worry, eating like a local doesn't have to mean eating local food.

Also read How to Eat Like a Local by Day in Shanghai.

Whilst they might hail from the opposite side of China, Xinjiangnese restaurants have become a mainstay in Shanghai and a firm favorite for Shanghainese and westerners alike with small Xinjiangnese restaurants dotted all over Shanghai. Though open during the day, they really come into their own at night as one of the few 24 hour restaurants in Shanghai. Xinjiang food tastes more similar to central Asian cuisine than that of Shanghai, so if you have had enough of the sweet and oily Shanghainese food then this can provide a welcome respite. This is the way the locals treat it too - even they can have too much of local food.

Ask a friend or at your hotel where the closest Xinjiang restaurant is. Wherever you are in Shanghai there is normally a Xinjiangnese restaurant within a few hundred meters of you.

From a westerners perspective one of the great things about these places is how easy it is to order. The menu on the wall will always show helpfully large pictures, so not only do you get a clear idea of what you're ordering, almost no Chinese is required. Portions are generous, and rarely cost you more than 20 RMB.

It can be difficult for visitors to pick out Xinjiangnese restaurants from other Chinese eateries so look out for menus are either blue or green, as opposed to the red or yellow of most other Chinese restaurants, and those that work there will usually be Muslims wearing a Hijab or Taqiyah.

Whether it follows an evening out or a jetlagged nighttime wander you really should try the late night street food Shanghai has to offer. Unlike other Asian cities, in Shanghai after about 10 pm dining options start to become more dispersed. Limited to fried noodle stalls and local Chinese 'restaurants', sometimes little more than a hole in the wall with plastic chairs on the sidewalk outside.

On seemingly every street corner throughout Shanghai from about 10pm–3am are small stands selling grilled food or (chow mein), both for around 6–10 RMB.

Having eaten chow mein 8 times in a week before I can tell you that whether you are feeling invincible at 1am or miserable at 11am the next day the oily, spaghetti-esque fried noodles will only improve the situation. If you have the opportunity then try the grilled street food as well, but the street noodles are hard to beat, and are always busier with the locals.

There is some concern about the quality of the street food in China, so the best thing to do here is look for the street stands where the locals are queuing to eat, this will also give you enough time to size up the situation, but once again pointing, persistence, and 'zhe ge' will be all you need.

You don't have to follow this guide at all but in a city that prides itself on being truly international it is a nice feeling to have gone local and leave having had a real Chinese experience, plus you are free to sneak off for pizza the next day without any guilt whatsoever.

Street Noodles: Situated on almost every street corner throughout the French Concession

Xinjiangnese restaurants: The sort of local restaurants referred to in this guide are not the sort listed in guide books, they are the ones you really need to ask about to find; but there is one, at 249 Wyuan Road near Yongfu Road, that is a favorite among Westerners partying just around the corner on Yongfu Road and is a great place to go before, during, or after a night out there.