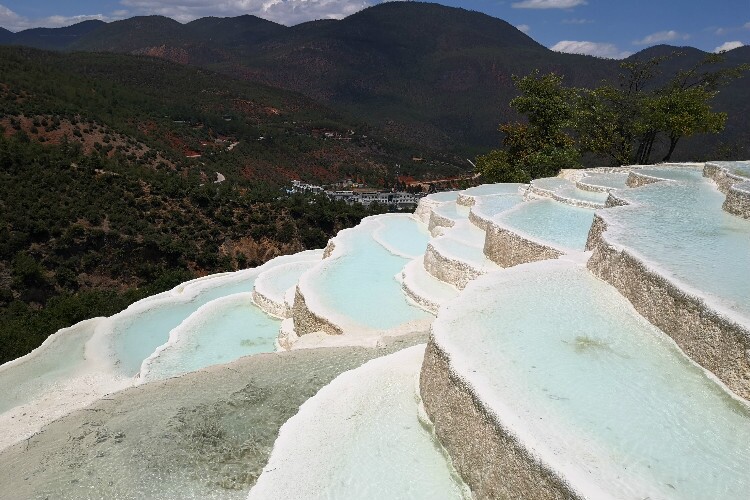 With an altitude of 2,380 meters (7,808 feet) above sea level, the Bai Shui Terraces area wonder made bythe daedal hand of nature at the foot of Haba Snow Mountain.Being 103

kilometers (64 miles) away from Shangri-La, the terraceshave been formed owing to ceaseless sedimentation of calcium carbonates.

The mountain springs containing calcium carbonates flowslowly from the Haba Snow Mountain, during which the calcium carbonates gradually settle, resultingin clearersprings. The tablelands wereformed over thousands of years, just like terraced fields, layer upon layer, andare praisedas "the Terraced FieldsLeft by Immortals", hence the name of Bai Shui Terraces.

Covering an area of three square kilometers, the Bai Shui Terraces are called Shi Pu Zhi in the Naxi language, which literally means the gradually growing flowers. In the middle of the Bai Shui Terraces is a fantastic wonderland that is composed of 10 spring ponds, along which you can discover theorigin of its source.

The origin source of the wonderland is under a willow tree, where the springs gush out and flow into the "Heavenly Pond", and then meander across the other terraces. If watching closely enough, you'll find the springs contain countless tiny white sands, which shine brightly under the sun. In the north of the origin source stands a rock, on which a poem is inscribed, and it reads:

A monk lived in this holy Buddhist land 500 years ago, who devoted himself to preaching Buddhism.

Just like waving clouds and white snow, the silver terraces stretch for miles. As clear as crystal, the springs meander, which seem to be frozen on the terraces.

The springs will gush out ceaselessly, how I envy the immortal who created the terraces.

Cradle of the Dongba Culture

Not only are the Bai Shui Terraces a picturesque place, but they are also the birthplace of the Dongba culture of the Naxi Minority Group. It was said that Dingbashiluo, the first saint of the Dongba religion, wasfascinated by the beautiful scenery of the Bai Shui Terraces on his way back from Tibet to Yunnan, anddetermined to settle down and preach Buddhist sutras there;the later generation built a Buddhist temple in memory of him.

The Naxi people hold various kinds of sacrificialactivities to celebrate their traditional festival on the eighth day of the second month of the lunar calendar each year, during which the Naxi people sing and dance around the Bai Shui Terraces to entertain God.

Transportation:a coach from Shangri-La Bus Station will take you to Sanbei Town in four hours