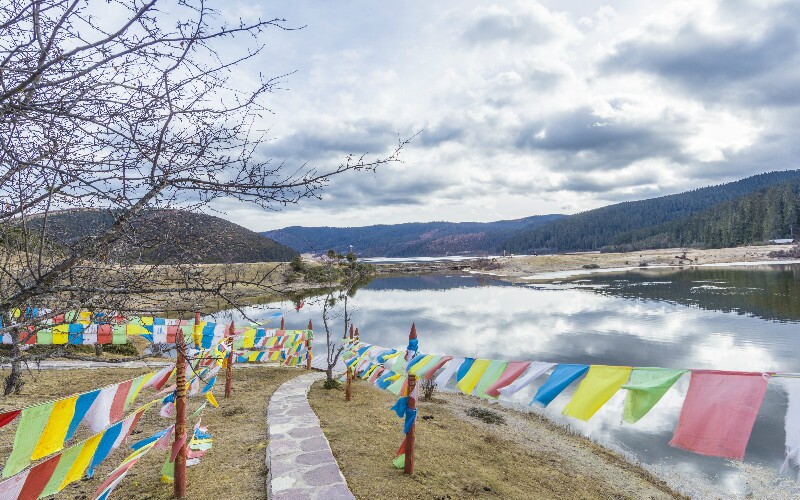 Bitahai Lake is regarded as a pearl of the Plateau, the most charming view is the tower-like hill and this clear, peaceful water. Such the particular water, flowers and animals form two peculiar wonders of the Bitahai Lake: Fish Drunk by Azalea and An Old Bear Catches Fish.

The Bitahai Lake Nature Reserve occupies a total area of 840 kilometers with the Bitahai Lake as the center of this scenic spot. Being in the subtropical zone, Bitahai Lake is a fault lake with 3 kilometers in length and 1kilometers in width. It is rich in wild animals and plants. The vegetation is characterized by abies -fabri and spruce. Among the rare animals and birds, black -necked cranes are Class-A species under state protection. The Bitahai Lake has abundant fish resources. The precious "Bita Double-Lip Fish" is an ancient species left from the Fourth Glacial Age.

Bita means in Tibetan a place with a dense oak forest and "Bitahai" means a quiet lake. The Bitahai Lake is surrounded by mountains covered with ancient pines, oaks and rhododendrons, like an emerald in the heart of the mountain. In the morning, water is as black as Chinese ink, as peaks are all mirrored in the lake; On the noon, water is as green as a jade; In the evening, the water and the sky blend into one color, giving a dazzling light. The most breathtaking view of the lake is in the moonlight. When the day draws to a close, a bright full moon arises above the eastern mountains and over the top of the trees. From the small cottage of the forest ranger comes the sound of joyous singing and dancing. Weekend visitors are enjoying the most memorable and grand spectacle in their lives.

One of the distinctive biological characters of the lake is a small wooded island in the center of the lake and some boats can ferry tourists there, and on the island grow dense spruce, abies-fabri and azalea woods. All of the green grasses, zigzags, singing birds and fragrant flowers make you feel that you are in a fairy world. Right around the lake there is a dense azalea forest, whose flowers are often in full bloom. In the fifth month of the Chinese lunar year, tourists can see a peculiar sight-the fallen azalea flowers afloat on the water, while the fish amuse themselves in the shallow water of the lake, swallowing the fallen azalea flowers. The fallen flowers are little poisonous, and will cause them to appear "drunk" as they float on the surface of the lake, so it is called " Fish Drunk by Azalea.

In later spring and early summer, wild flowers bloom profusely in the meadows, the glorious colors shine like twinkle stars in a sky of fresh green grass; In the depth of winter, flocks of cows, horses and sheep sport in the meadows, immersing in joy. The Bitahai Lake is encircled by virgin forests. Black bears, brown bears, monkeys, parrots and lynxes, clouded leopards, buffaloes, squirrels also can be found in the forest.