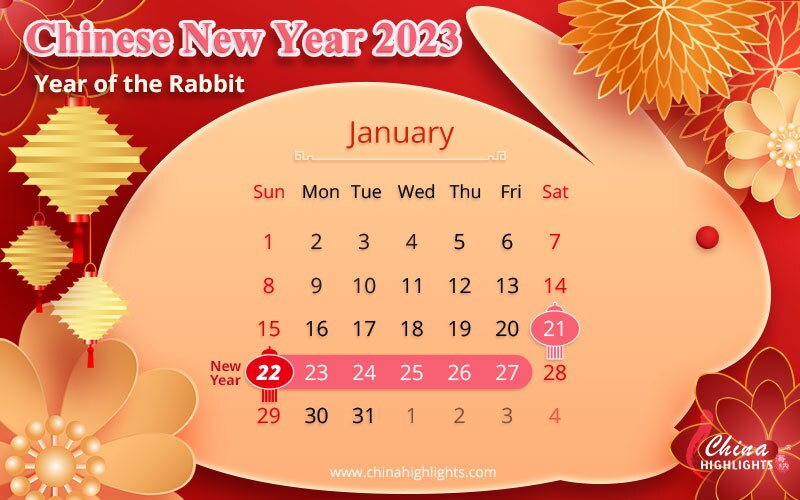 Celebrations of Chinese New Year traditionally last for 16 days, starting from Chinese New Year's Eve to the Lantern Festival. The most notable dates of the Lunar New Year 2023 are these three days:

What is the Chinese New Year 2023 Animal? — Rabbit

2023 is a Year of the Rabbit according to the Chinese zodiac. The 12 animals consist of Rat, Ox, Tiger, Rabbit, Dragon, Snake, Horse, Goat, Monkey, Rooster, Dog, and Pig.

You can use our free Chinese zodiac sign calculator tool to find your zodiac animal sign and check your horoscope in 2023 on our page Chinese zodiac.

Why Does Chinese New Year Date Change Every Year?

The date is decided by the Chinese Lunar Calendar, which is based on the cycles of the moon and sun and is generally 21–51 days behind the Gregorian (internationally-used) calendar.

How Long is the Chinese New Year Holiday?

Offices, banks, factories, shops, and most non-essential services will close doors for a week's holiday. Hotels and large retail outlets stay open and may even be busier than usual! School holidays are four weeks long and migrant workers abandon their factory and construction jobs for weeks to return home.

Holidays in Hong Kong, Macao, and other Asian countries such as Malaysia, Singapore, Vietnam, and Korea are 1 to 3 days.

This table below shows you when Lunar New Year is celebrated from 2022 to 2034 and what the animal signs are for each Chinese zodiac year.