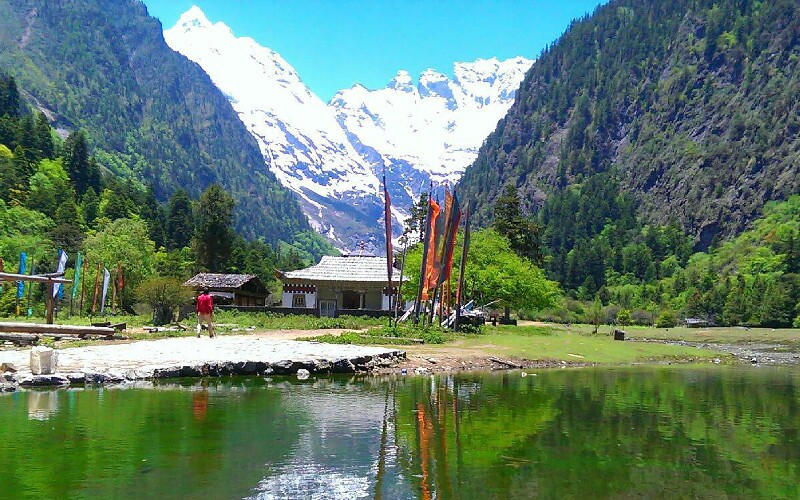 Located in Yunling Township, Deqin County of Yunnan Province, Yubeng Village is a beautiful and wonderful place. If you want to visit this wonderful place, you need to walk or ride a horse for 18 kilometers and travel across Yakou for 3,700 meters (Yakou is a flat but lower place that joins two mountains), because there are no highways for you to get access to it at present. Besides, Yubeng Village lies at the foot of the Wuzi Peak under the Niancimu Peak of Meilii Snow Mountain. With beautiful scenery and simple and honest people, Yubeng Village is a land of idyllic beauty, which is called the miniature version of the real Shangri-La.

Surrounded by mountains, Yubeng Village is sparsely populated because of its unique geographical situation. Since ancient times, there has only been one path that leads Yubeng Village to the outside world; therefore, only around 20 families have settled there. Yubeng Village is divided into Upper Yubeng and Lower Yubeng. From Upper Yubeng, trekkers have access to the Sino-Japanese Base Camp in Kawakarpo of Meili Snow Mountain. From Lower Yubeng, yon can find the paths to the Sacred Waterfall. Along the way, you can enjoy the wonderful views of Shizhuan Tianshu 石篆天书 and Wushu Tonggen 五树同根.

Yubeng Village lies at the foot of high mountains, such as Goddess Peak, Mianchumu 面楚姆 and Wuguan Peak 五冠峰. Under the evolution of ancient glaciers and a glacial staircase, you can see u-shaped valleys and Piaoli stones 漂历石 with various shapes that were formed under weights of 1,000 tons or even 10,000 tons in Yubeng Village. All of these make contributions to the unique geological landscape there. On the way to Yubeng Village, a Piaoli stone lies at the roadside. Some dark colored letters that look like Tibetan are clearly seen on the stone, which is called "Shizhuan Tianshu" by local people.

Plants in Yubeng Village are luxuriant and singular because of its abundant rainfall, special geographical environment and climate conditions. People can often see lots of other parasitic plants on the trunks of some old trees. This strange phenomenon is called "Wushu Tonggen".

Legend has it that for centuries Yubeng Village was unknown to the outside world. One day, an old man arrived in Xidang Village near Lancang River (the Mekong River) and tried to buy highland barley from the villagers there. No one knew where he came from, so some of the villagers followed him when he left but, on the way over the mountain, the old man disappeared. Later, the old man came back to Xidang to buy food again. The villagers objected and told him "we aren't going to sell you barley or wheat, but just some millet". When they loaded the food for the old man, one of the villagers made small holes in the bags. After he started his journey back home, the old man was followed again. He didn't realize that the holes in the bags had spilled the millet along the way. However, when he reached a huge rock, he disappeared. So the villagers pried up the rock and Yubeng Village was discovered.

Transportation: You can take a bus to Deqin County from Shangri-La. After you arrive at Deqin County, you can take a bus at 3:00 pm to Xidang Village or you may rent a car to get there. It is 8 kilometers from Xidang Village to Xidang Hot Springs. You can rent a car to get there. The price should be negotiated face to face. Yubeng Village is only accessible from Xidang Hot Springs by walking or riding a horse. The preferential price for renting a horse is 160 RMB. It takes you five to six hours to get to Yubeng Village on foot.

Food and Accommodation: The villagers eat simple food. Yak butter tea, Babaand potatoes can be a meal. There is still no electricity in the village, and all of the villagers use their own hydroelectric generators to produce electricity. Both Upper Yubeng and Lower Yubeng have hotels, including an international youth hostel. Food and drinks are provided in the hostel, but they are expensive. There are small Sichuan restaurants there, too. You may choose to stay in the Base Camp, however, camping is not recommended as some campers once froze to death when they stayed in the camp.