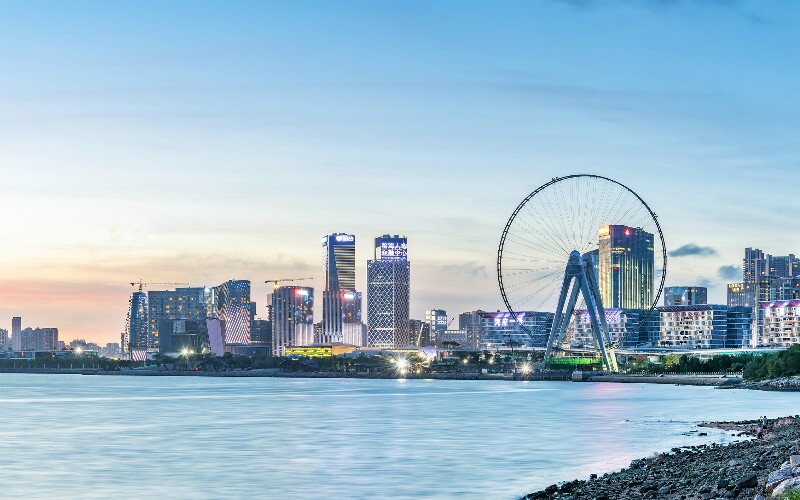 Shenzhen’s Skyline: the Top 7 Skyscrapers You Should Know About Before 1979, no one could have imagined that the seaside fishing villages could become a cutting-edge metropolis.

Shenzhen now has the largest number of skyscrapers that are over 200 and 300 meters in height in China, as well as having more than 300 skyscrapers, which is the largest amount in the country. These skyscrapers form Shenzhen’s skyline with other tall buildings and towers.

Here, we have summarized some of the tallest and most iconic buildings with some advice on how to explore Shenzhen’s skyline, as well as explaining why Shenzhen has so many skyscrapers. Don’t miss the opportunity to enjoy one of the best city skylines!

The Top 7 Iconic Skyscrapers in Shenzhen

1. The Tallest: Ping An International Finance Centre (the Ping An IFC) The Ping An IFC is the tallest tower in Shenzhen and the fourth tallest building in the world. The building features the headquarters of Ping An Insurance as well as offices, a hotel, and a luxury shopping mall.

The Free Sky observatory deck is located on the 116th floor, from which you can admire a bird’s-eye view of Shenzhen and Hong Kong’s skyline. The KK100 is currently the second tallest skyscraper in Shenzhen. The whole building is designed in a special streamlined shape, which symbolizes a fountain, to represent the development and prosperity of Shenzhen.

The KK100 might be the most luxurious skyscraper in Shenzhen as it accommodates top-class offices, an international level shopping center called the KK Mall, and one of the world’s highest 5-star hotels, The St. Regis Shenzhen.

Find out about other popular shopping places and the best things to buy in Shenzhen. Shaped like a spring bamboo shoot, this building is now the third tallest skyscraper in Shenzhen. The whole building has a unique bamboo shoot appearance. The basement of the building is a popular shopping mall called the MixC.

Metro Line 11 connects Shenzhen Bao’an International Airport and the Spring Bamboo, which is a wonderful place to go shopping during your layover in Shenzhen.

Check out more things to do during your Shenzhen layover. When Shun Hing Square was built in 1996, it was the tallest building in Shenzhen, China, and even the whole of Asia. It holds the record of being the thinnest skyscraper because the ratio of its width to its height is 1:9. With two lightning conductors standing on the roof, the whole building looks like a huge stun gun.

The building has the nickname of Diwang Building, derived from the auction price of the land for the building, which reached 140 million USD and was the most expensive piece of land at that time.

The top floor of Shun Hing Square is an observation deck and there are exhibits about Shenzhen’s development history. The octagonally-shaped building is the tallest in the world to be built with concrete-filled steel tubular columns. SEG Plaza is close to the largest electronics market – Huaqiangbei (also called Huaqiang North) – where you can find all kinds of electronic products and parts.

Shenzhen Energy Mansion isn’t one of the tallest skyscrapers in Shenzhen but you will be attracted by its wavy-shaped walls, which are designed to provide energy-saving performance and a graceful appearance.

The building’s shape varies depending on where you look at it. Visit the site and share some photos of it online.

Built in 1985, this 160-meter-high building is hard to consider as a skyscraper when compared with those mentioned above. However, Shenzhen International Trade Centre Building is an important milestone in the city’s development.

The building used to be the tallest in China. When under construction, the builders constructed one floor in 3 days while it may take 4 to 5 days to finish the same job in the rest of the world. The high efficiency was praised as “Shenzhen speed”.

Many famous people, such as former American presidents Bush and Nixon, have visited this building because it used to be the symbol of Shenzhen. Having a meal in the revolving restaurant on the 48th and 49th floors is an impressive experience.

Best Times to Observe the Shenzhen Skyline: Autumn and Winter Visit Shenzhen in a clear day

The best seasons to see the Shenzhen skyline are early spring, autumn, and winter, between October and April. There is less rainfall and less chance of typhoons during this period, and a better chance to enjoy the views on a clear day.

Shenzhen’s rainy season starts from late April and continues until September. On rainy days, the skyline may be shrouded in mist so you may need some luck to be able to admire the view.

Learn more about Shenzhen weather, including seasonal weather and a 5-day forecast.

The most beautiful views are at night when colorful neon lights illuminate the city.

Find out what you can expect for Shenzhen nightlife.

Why Shenzhen Has So Many Skyscrapers Shenzhen will have more and higher skyscrapers in the future. It has so many skyscrapers due to the city’s high-speed development but limited land supply.

As a pioneer during China’s reform and opening-up, Shenzhen attracted companies to set up their bases or factories there and more people went to the city for work. Shenzhen’s development has made it one of the most crowded cities in China with over 20 million people living in 932 km3 (as a comparison, 8.5 million people live in 789 km3 in New York).

For this contradiction between land and population, more skyscrapers have to be built to meet the development requirement.

There is another issue that results in Shenzhen’s buildings being higher - the compensation for demolition.

Many of the skyscraper sites today used to be urban villages and the developers must pay compensation (generally millions of RMB per family) to the residents. So some buildings must be built higher to make the projects economically viable.

View Shenzhen’s Skyscrapers with Us

If taking the metro or a bus and looking for your destination on a mobile phone map is not for you, consider using our services to go on a private tour.

If you are traveling with us, you will have an experienced guide and driver to take you around in a comfortable car. You can enjoy a completely worry-free and uncrowded journey.

Check out our most popular Shenzhen tour for more ideas:

Alternatively, you can tell us your requirements to customize your own experience.

shenzhen Shenzhen Travel Guide - How to Plan a Trip to Shenzhen

shenzhen The Top 20 Things to Do in Shenzhen