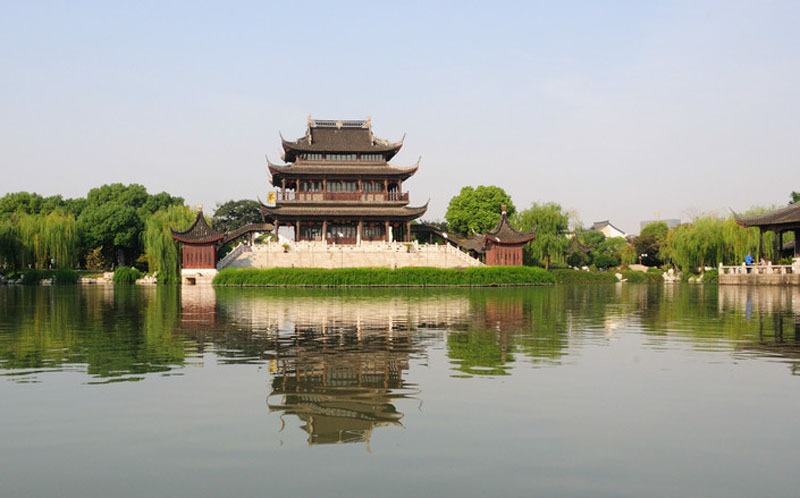 The gate to Suzhou is said to have more than a 2,400 year history. It is said to have been the only gate in China with both a lower water entrance and an upper land entrance. It was built at a time when a canal moat surrounded Suzhou. The present structure was built in 1986. It is part of a park. It was built on the spot of another tower that was built about the year 1344 at the end of the Yuan Empire period.

The present Panmen Gate (盘门, pánmén) was mostly built in the last few decades. About 2,500 years ago, a moat canal surrounded Suzhou and provided for convenient transportation. But a wall was built to defend the city, and in order to defend the canal passage, a tower was built over the canal.

The present building has a history dating back to the Yuan Dynasty period (1271-1368 AD) when the Mongolians had a big empire. It was built about the year 1344. In 1976, the Suzhou government rebuilt the tower, and in 1983, construction was done on the canal. In 1986, the present red building was built. It has two floors. The Pan Men Gate is part of the Panmen Scenic Area Park. There are three main attractions in the park. These are the Panmen Gate itself, the Wumen Bridge, and the Rui Guang Pagoda.

The Pan Men Gate itself is a two-storey red house-like building with a curved roof. It doesn't look like a defensive building at all. It was built in 1986. However, the house-like building sits on a large solid base that has an arched opening. The canal passed underneath. A sluice gate was lowered to close off access. The first floor has an exhibit of ancient weapons.

The Rui Guang Pagoda (瑞光塔) is said to have a long history. It is said that a famous figure in Chinese history named Sun Quan had a tower built there for his mother. Sun Quan was a man who founded a state called Wu after the fall of the Han Empire. It is said that he had a 13-story structure built there in 247 AD. It is also said that in 937, as the temple was being repaired, brilliant colorful light was seen above the tower.

The form of the present structure may date to 1125. It is said a wealthy man had a seven-story structure built at the spot. The tower was damaged extensively in the 1800s. In 1978, some scriptures, statues, and jeweled articles were found hidden away on the third floor. It is said that some of the objects were extremely valuable.

China Highlights can help you customize a tour to Suzhou, with a visit to Panmen Gate, or jsut see our Suzhou tours.

east gate to the park, there is a tower called Auspicious Light Tower or Rui Guang Ta. In the park, you can also feed fish and walk around in the park. The park measures about 500 meters by 200 meters or 550 yards by 118 yards. There are also demonstrations of acrobatics, dances, or other entertainment. In the spring and summer and fall, you can see the colorful flower gardens.