The Top 10 Chinese Drinks You Should Try in China

When traveling through China, you may have trouble finding your most beloved beverages from back home, unless your favorite drink is Coca-Cola, in which case you'll have no problem. If Coke isn't your thing, though, have no fear. China has plenty of its own delectable drinks to offer that you will probably like better.

Here's a list of 10 must-try drinks during your trip to China. Other than boiled hot water, green tea is the most popular beverage in China.

Hot boiled water: It is the most natural and pure Chinese traditional drink. One thing that surprises foreigners is that if they ask for water, they'll often get really hot water. Simple boiled water or "kai shui" (开水 kāishuǐ) is probably still the number one drink in China, though now the plenty of the alternatives of store-bought drinks, bottled cool or cold water, and street venders selling various drinks is making drinking plain boiled water less common than a generation or two ago. Chinese are getting used to drinking cold water, but traditionally, this was considered bad for the health.

This was partly due to contaminated pipe water. Even now, few Chinese will drink tap water anywhere directly. They generally always boil any water they drink or make it into a tea. But the other reason is that Traditional Chinese Medicine ideas considers it bad for the health to drink cold water on hot days or when you are cold.

So every train station, big bus station, and many public buildings will still have free boiled water dispensers. And most restaurants serve boiled water. Chinese drink hot water to stay warm and healthy in the winters and healthy and alert in sweltering summers.

2. Their Second Favorite Drink — Green Teas of Many Varieties Green tea: One of China’s greatest gifts to the world along with paper is tea. Tea is made from the leaves of varieties of the C. sinensis bush. Although young people are starting to hang out in trendy cafes sipping cappuccinos, many Chinese still carry around tea in their thermoses. Tea culture is especially strong in the south of China (especially in Sichuan, Guangdong, Yunnan, Zhejiang, Anhui, and Fujian).

Green teas come in dozens of varieties in China. Along with green teas (relatively unprocessed dried leaves of various varieties of green tea bushes), Chinese also sometimes drink what they call "red tea" made from oxidized tea leaves (called black tea in the West), and if they can afford it, many love to drink Chinese black tea (or fermented tea from Pu'er) that is described below.

Here is a helpful chart of various kinds of green tea varieties you can try. Note that in the chart below, Green Tea, Wulong Tea, and Jasmine Tea are all varieties of green tea. Soy milk: Soy drinks (most types can be called soy milk) are made from soy beans and other ingredients including usually sugar and salt at least. It is a traditional drink and has been drunk for centuries. For many people, it is a daily staple beverage they drink every day. It is sold in the street and storefronts along streets in the morning all over China.

Compared to just 20 years ago, soy drinks have grown fancier. It was once an extremely cheap drink suitable for peasants to enjoy daily in the morning, but now the Chinese have invented hundreds of varieties, using various kinds of beans to mix in with soybeans, various herbs, fruits, vitamins, flavors, etc.

Vitasoy is perhaps the most popular brand of commercial bottled soymilk. It tastes quite good cold. It is available along with sodas in most stores.

Considered a healthy drink: While debate rages in America about the health benefits or adverse health effects of soybeans, in China, it has always been considered a healthy, high protein food. Unlike the US, China does not allow the cultivation of GMO soybeans, so drinking Chinese-made soy products is better for your health and avoids the health issues of GMO soybeans.

4. Chrysanthemum Tea — A Favorite Flower Medicinal Tea That Is Good For You Chrysanthemum tea: To say that there is no shortage of tea varieties in China is putting it very, very lightly. Besides hundreds of kinds of teas made from the leaf of the C. sinensis plant, there are many other kinds of herbal and traditional teas and drinks that are made from many other plants. One of the most traditional and commonly drunk of the teas is refreshing chrysanthemum tea that has a nice floral aroma.

Many drink it when the weather turns cold. They think it is a remedy for ailments from the common cold to neurological disorders to blurry vision. It is a soothing beverage choice regardless of your health status.

5. Wang Lao Ji Tea — A Medicinal Tea that Comes in a Can Wanglaoji cans can be bought cold like a soda.

Wang Lao Ji tea: It is commonly referred to by expats simply as “the tea in the red cans.” Wanglaoji (王老吉 Wánglǎojí) is one of the most popular brands of tea. It's recipe is similar to some traditional medicinal teas, but packed in a can.

It goes especially well with spicy food and is refreshing on hot summer days. As is common with Chinese tea brands, it contains traditional Chinese medicine, so you can be sure you're drinking healthy.

6. Luohanguo Tea — Sweet and Packs a Punch of Energy Luohanguo fruit tea: This can be considered a natural traditional and very healthy energy drink that improves strength and endurance if drunk in moderation over time. In China, it is used as a natural sugar substitute and sweetner and is commonly sold in the supermarkets all over China. The English name is monk fruit.

Simply brewed by itself in hot water, it makes a tea that looks and tastes like a kind of cola or rootbeer and packs the same stimulating punch. Though Wanglaoji is a mix of herbs, the taste is strangely similar to luohanguo tea.

Health benefits: It grows in the south parts of China, and a favorite hot brew for the onset of cold weather to ward off sickness. It is sometimes called "longevity fruit." It is purported to increase health and lifespans. It is packed full of minerals and antioxidants and might even ward off cancer. 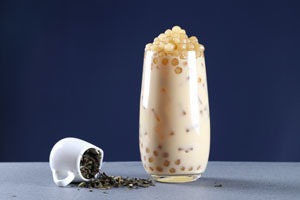 Milk tea/bubble tea: Milk tea is very popular in Hong Kong partly through the British influence, and drinking it spread north into Guangdong and other places. Then, in the 1980s, in Taiwan, bubble tea erupted and spread all over Asia and China. It is an innovative concoction made with tea, milk, and/or fruit plus chewy white or black tapioca balls.

There are also ice-blended fruit smoothie versions composed of ice blended with fruit or syrup. Now there is an endless variety of combinations and flavors, and more are being invented every day.

Cheese tea: Cheese was never a traditional Chinese food. Maybe, precisely for this reason, the young people in China since about 2018 have a new favorite. Soft cheese is layered on top or added in with other ingredients such as milk. Next might be: fresh vegetable and cheese salad tea!

In China, there are large chains such as Yidiandian (一点点) and Coco (都可) as well as private small stands. Served hot or cold, it's a great drink for winter or summer.

8. Ginseng Tea — Expensive, But for Some, Very Healing Ginseng tea: This is a must have herb tea for many older people in China and is in high demand. It is in such high demand that it is expensive. It is thought to promote longevity, be effective for anti-aging, increase intelligence, and help people think. It is mainly thought to be useful for older people and for some athletes wanting to be keep a keen edge.

Nowadays, cheaper American ginseng is widely sold along with Asian Ginseng in stores and traditional medicine stores everywhere. Be careful about fake or adulterated ginseng. People have found mercury residue in ginseng roots. It is sold by weight, so mercury increases the weight and therefore the value but is deadly. Avoid drinking too much at one time or drinking it for more than several days at a time. 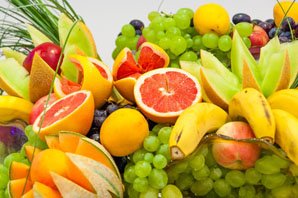 You can get fresh fruit juices made from fruit combinations you choose.

Plum drink: In cities such as Shanghai that are swelteringly hot in the summer, plum juice — made from Chinese plums and sweetened with a bit of sugar — is the drink of choice for relief.

Fruit cups: Chopped fruit mixtures swimming in tea or juice such as apple or watermelon juice are also commonly sold at street-side stands or shops along the streets.

This chart can help you order the kind of juice you want. It provides a pronunciation guide.

10. Pu'er and Other Fermented Black Teas Big good quality Pu'er bricks like this can cost 1,000s of dollars!

Pu'er tea: One of the confusing things about Chinese teas is that what we call "black tea," the Chinese call "red tea" (红茶 hóngchá or oxidized tea), and what they call "black tea" (黑茶 hēichá or fermented tea) Westerners have rarely drunk. It is for this reason and because it has some good medicinal effects that we suggest you try some and buy some during your trip to China.

Pu'er teas, grown in a region of southern Yunnan Province, are the most common of this variety of tea and can be quite expensive. Because of yeast and microorganisms that are in the preparation of the better quality and longest fermented kinds, good quality Pu'er is mood altering and relaxing. You might feel the stress draining away after you drink it.

Other Popular Drinks in China

Intrigued? Curious? Thirsty? Have a Food and Drink Tour Adventure with Us! To try these drinks and more in China, let us know when you book your tour, and we'll help you find beverages you will like.

Are there some specific drinks you want to try from this list? We can customize your itinerary accordingly, just contact us to start planning your trip. What the Chinese Eat for Breakfast — 10 Popular Local Breakfasts The Most Popular Articles

Giant Pandas — All the Things You Want to Know

How to Plan a First Trip to China