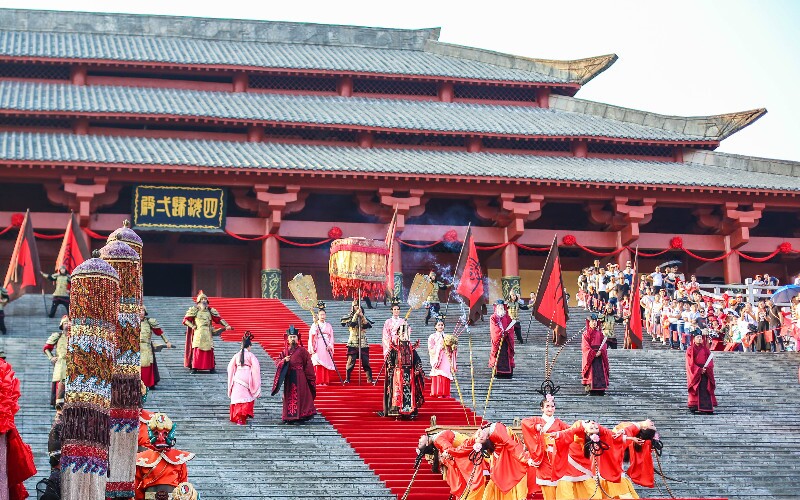 10 Amazing Facts on the Tang Dynasty

The Tang Empire (618–907) is noted as one of the longest surviving empires in the region. They controlled the Central Asian silk road and flourished culturally for over a century before disasters and conflicts brought a gradual decline, and then insurrection ended the empire.

These 10 facts will help you understand the Tang Empire better.

1) A woman general helped to found the Tang Empire!

Li Yuan (256 BC – 195 BC) was one of the commanders in the tyrannical Sui Empire. Their massive wars and vast construction projects involving and killing millions and high taxes made the Sui court very unpopular. Li Yuan decided to attack and called his sons to help him.

His daughter raised an army by first distributing her money to gain supporters and then inviting other rebel leaders to help. She led an army of 70,000 to capture several cities before joining her father at Chang'an (Xi'an) where Li Yuan captured the city and called himself Empeor Gaozhu in 617 AD. Women generals were rare in Chinese history.

2) Emperor Gaozhu was deposed by his own son.

The Big Goose Pagoda stands at the site where an earlier temple was built in Chang'an in 652.

Emperor Gaozhu had a short reign of only 9 years. In 626, Li Shimin (599–649) who was one of Gaozhu's sons tricked his rival brother and killed him. Then he entered the palace and forced his father to abdicate and declared himself the Emperor Taizong (唐太宗, Tang Great Religion). Gaozhu died in 649, and he was buried in the Zhaoling Mausoleum.

3) The Tang Empire had the only female emperor in Chinese history!

The reign of the Tang Dynasty was interrupted by Empress Wu Zetian. She was the only empress in 2,100 years of imperial history.

The wife of Emperor Gaozong, Li Shimin's son, and Wu Zetian became the ruler of the affairs of the state after the emperor suffered a stroke. In 690, Zetian proclaimed herself the Empress of her own dynasty. Under her reign, the army successfully conquered Central Asia and added much territory to the empire.

She ruled until 705 when a palace coup forced her to yield her position and the Tang Dynasty was restored.

4) The Tang and Western Han Dynasties were strangely alike.

Though separated by 800 years, the empires of the Tang and Western Han were similar in many ways:

5) The Tang Empire was the most populous empire.

During the first 130 years, the Tang Empire reached its height before the An Lushan Rebellion in 756. A census was taken in 742, and the population of the empire is estimated to have been about 50 or 60 million. It had twice the population of the second most populous empire at the time, the Umayyad Empire.

6) The Tang Empire had the region's best poets.

The Chinese generally think that the best poetry was written during the early and middle eras of the Tang Dynasty. The best poets in Chinese history are thought to be Li Bai and Du Fu. They both survived the An Lushan Rebellion, and the hardships colored and tempered their poetry to touch even the hearts of modern Chinese. Their poems are appreciated because of their simple style and common subject matter.

Li Bai (701–762) was one of the greatest romantic poets of ancient China. He wrote at least a thousand poems on a variety of subjects ranging from political matters to natural scenery.

Du Fu (712–770 AD) also wrote more than a thousand poems. He is thought of as one of the greatest realist poets of China. His poems reflect the hard realities of war, dying people living next to rich rulers, and primitive rural life.

Huaqing Hot Spring, a famous royal garden located near Xi'an, is famed for both its dainty spring scenery and the romantic love story of Emperor Xuanzong (ruled 712-756) and his concubine Yang Guifei.

Wealth increased, and the empire became more urbanized. In 600 AD, 600,000 people lived in Chang'an, and only Constantinople was as populous. About the year 700, Chang'an became the biggest city in the world with a million people. Perhaps only Baghdad in the Middle East was anywhere near its size. In 800 AD, after the Lushan Rebellion and several wars, 900,000 lived there, and it was still the biggest city. By the year 900, the population fell to about 750,000, and Baghdad was bigger. Luoyang also had a million inhabitants as the eastern capital.

8) External attacks and civil war caused the death of millions of people.

In the middle Tang Era from about about 750 to 790, civil war, famine, and external attacks caused the death of millions. First in the year 750, the Nanzhao in Yunnan in the south rebelled against the Tang Dynasty and defeated two armies. Then Muslim Arabs attacked from the west in 751 and defeated a Tang army.

An Lushan was a general who rebelled in 755 and captured both Luoyang and Chang'an. The civil war severely weakened the army and the empire as a whole. The Tibetan Empire took advantage of the war and captured a large part of the northern land area including Chang'an in 763

9) In its last 50 years, the Tang Empire suffered severe natural disasters and a little ice age.

The Yellow River is now shallow and tamed due to damming, but in the late Tang era flooding was frequent.

First, in 858, the Grand Canal flooded massively and inundated much land in the northern part of China. There were thereafter many floods of the Yellow River at the end of the  empire.

Then in the year 873, a horrific drought and famine swept not only the empire but the whole of Eurasia. It was period of cold and dry climate like the Little Ice Age of 1600. Agricultural production fell by more than half. People and livestock starved.

10) The Tang Empire ended when the people rebelled due to the loss of the Mandate of Heaven.

As in many other times in history, the people interpreted the extreme natural catastrophes as a sign that the empire had lost the Mandate of Heaven to rule. It was an ancient political concept that encouraged the people to rebel. In 874, survivors of the floods and droughts started a 10 year rebellion called the Huang Chao Rebellion. Both Chang'an and Luoyang were captured, and dynastic rule was greatly weakened.

Xi'an tours: You can learn about this prosperous period of the Tang Empire's history by touring the imperial clan's mausoleums. These include the Qianling tomb complex at Liangshan. This large complex contains the tomb of Emperor Gaozong who was the son of Li Shimin and that of Wu Zetian.

In the same complex are the tomb areas of Prince Yide and Prince Zhuanghuai.