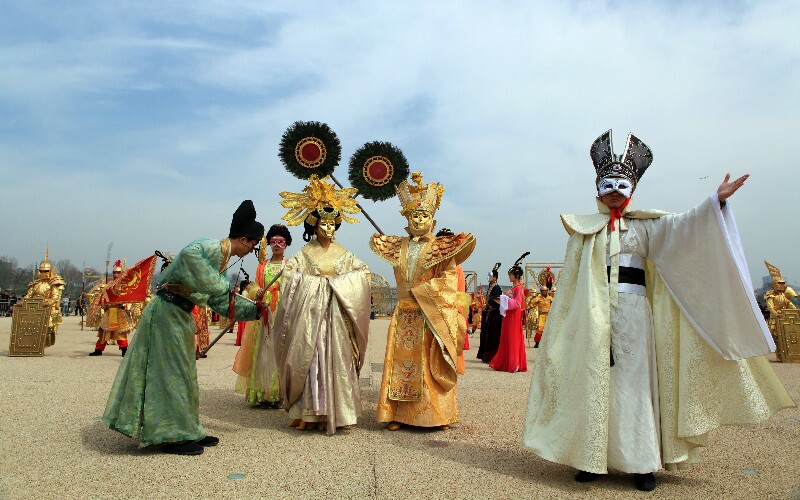 Emperor Taizong of the Tang Dynasty The Tang-style Music and Dance, a performance featuring elements of Tang Dynasty.

Emperor Taizong of Tang, born in 598, also known as his original name Li Shimin was the second emperor of the Tang Dynasty (618-907). He ruled from 626 to 649. After he died, his ninth son, Li Zhi, took the throne as Emperor Gaozong.

In the year of 626, Li Shimin killed his two brothers and led an insurrection against his father.

He was said to be good with handling weapons and was a good fighter in battle.

Before he deposed his father to become an emperor, he played an important role in defeating the Sui Emperor's troops and helping his family rule the empire.

He is thought to be one of the great emperors because he expanded the Tang Empire and the government stabilized during his reign of 23 years.

Under his rule, the territory of the Tang Empire expanded and prospered.

His reign was known as the "Reign of Zhenguan" which was considered a prosperous era.

The Tang Empire inherited the infrastructure that was developed by the Sui rulers, and once the conflicts in the empire were settled, the economy started to flourished.

The large Grand Canal system made transportation between northern and southern areas more economical so products were transported more easily and cheaply. Silk Road trade with Western areas increased as Tang armies defeated people in the northwest. This trade prospered the Tang economy, and the cultural and religious influences changed the culture.

He wanted to conquer the northeast from the start of his reign. When he killed his brothers as they were entering the palace and deposed his father in the year 626, a Gokturk leader named Qaghan led an army to Chang'an (modern-day Xi'an) to attack the Tang rulers.

Li Shimin agreed to an alliance with Qaghan and also agreed to send tribute. However, there was extremely severe weather and strange natural phenomena in the northwest in 627 and 628.

In the summer of the year 628, much of the Gokturk's livestock died. This natural disaster severely weakened the Gokturks. The Uighurs tribe in the area rebelled against the Gokturks, and the Tang army defeated the Gokturks in 630. To the west and north of the Tang Empire, there were other empires called Tuyuhun, Tufan, and Tibet.

In 653, a Tang army defeated the tuyuhun. They also defeated a tufan army in 638. But they were not able to defeat the Tibetans. The Tibetan Empire was a major threat to the Tang Empire throughout the reign of the Tang Dynasty.

In this way, the Tang Empire added of Central Asia and the lucrative Silk Road trade route was reopened.

China History 10 Fun Facts Every Tourist Should Know About Confucius