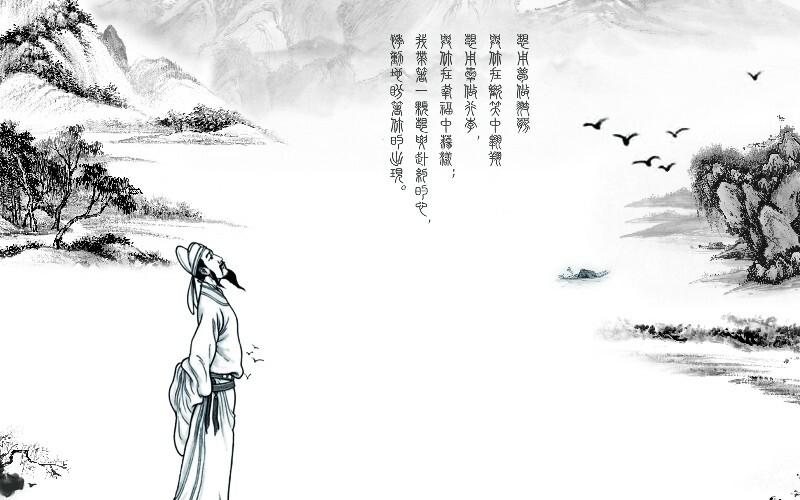 Li Bai is known as a famous Romantic Poet in ancient China. He was lived during the Tang Dynasty.

Along with writing romantic poems about women, he romanticized nature. Li Bai apparently led a wild life. He is said to have killed people in martial arts challenges and personal duels. He wrote about common things such as natural places and cities he saw, romance, war and death and things like this.

Along with having a wild life, writing poems and getting into trouble politically, he worked in the Hanlin Academy in Chang'an (now Xi'an), was a friend of the Emperor, and lived in exile.

People are not sure where he was born. Some speculate that he was born in Central Asia. When he was young, he lived in Sichuan near Chengdu. There he liked to read and study ancient poetry and ancient texts such as the Dao De Jing that is the central text of Daoism. He was thought to be a genius, and he also practiced martial arts and killed people in duels.

In 725, when he was in his mid-twenties, Li Bai sailed from Sichuan down the Yangtze River all the way to Weiyang (Yangzhou) and Jinling (Nanjing). Along the way, he met and stayed with famous people and rulers. He then turned back to the southwest, met Xu Yushi, married the daughter of a former high official, and lived in Hubei. Then in 742, he went with a Daoist named Wu Yun to Chang'an.

He was introduced to the Emperor Xuanzong around 742. He became a friend of Emperor Xuanzong who appointed him to a post in the Hanlin Academy that was a group of scholars who advised the imperial court on affairs, and worked on academic matters.

Then he wandered in the Tang Empire. He met Du Fu twice. They wrote poems about each other. Then he got into more political trouble. He was with Li Lin, Prince of Yung, who was then commander in chief of the Tang forces in central China.

In 757, he was in the fleet that was sailing against the imperial army. Perhaps he was merely visiting or perhaps he was an active in the rebellion. Li Lin was defeated, and he was banished to the southwest. Then he died five years later.

Li Bai and Du Fu have a lot in common. Both worked as imperial court officials though neither of them passed the Imperial Examination, both lived in Sichuan, and both traveled. However, they were also dissimilar. Dufu was more of an academic Confucian.

Li Bai was more of a Daoist. Dufu wrote Realist poems and Li Bai wrote romantic poems. Dufu wrote in a regulated poetic style called Shi, and Li Bai liked free-form poetry like a more ancient style. Both are said to have written more than a thousand poems, but people are not sure about how many of the poems ascribed to Li Bai were written by him.

They are considered China’s best poets, and wrote about everyday topics like romance, war, death, natural beauty and ancient geographical places they saw. It may be that their poems are so popular partly because Chinese people like to read about ancient places. But unlike poets in later eras whose poems became more erudite and esoteric, they wrote about everyday things that people can appreciate.