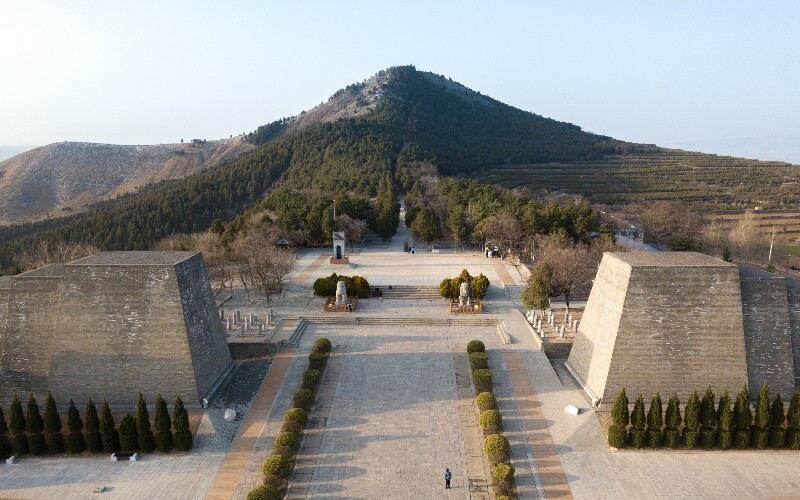 Wu Zetian (624–705) was the only female emperor in China's history. She ruled the Tang Dynasty as empress (655–690), and then as Emperor for 15 years, in the seldom-mentioned Zhou Dynasty. During her long reign totaling 50 years, the empire became relatively stable, peaceful, powerful, and prosperous.

Emperor and Empress: In China only the supreme ruler could be given the title Emperor (皇帝 Huángdì). While Wu Zetian officially acknowledged her husband/son as supreme ruler, she could only have the title Empress, though she ruled from behind the scenes.

Wu Zetian at a Glance

Chinese empires were rarely ruled by women, and when it happened it was not thought auspicious. Indeed, a woman ruler, Empress Cixi, marked the end of the Qing Dynasty, and Empress Wang Zhengjun (71 BC – 13 AD) the ending of the Western Han Dynasty. In the Tang Dynasty's case, Wu Zetian was thought of better.

The Prominent Role of Women in the Tang Dynasty

How did a woman become a ruler of the vast Tang Empire?

It partly had to do with the prominent role of women leaders in the foundation of the Tang Empire. Confucius had taught that only men should rule a kingdom. Women were owned as slaves or regarded as servants. For the centuries preceding, women played a subservient role in the political hierarchies in the region.

However, women played a prominent role in the formation of the Tang Empire, and from the beginning, the Tang Dynasty clan had a tradition of women ruling, receiving education, and being accorded greater rights and power. In this regard, the Tang Dynasty was remarkable.

The preceding Sui Dynasty fell due to uprisings against their harsh rule. Li Yuan's clan emerged as the dominant ruling clan, and one of Li Yuan's daughters, Pingyang, actually organized and led a large army. She was a popular general, and she led what was called the Women's Army because she led it. She helped to capture Chang'an that was the Sui capital city.

Her father, Li Yuan, became the first emperor of the Tang Dynasty, and he accorded her high rank and honor. Thereafter, women played a prominent role in the empire, and they had much more freedom and rights than in earlier empires. The could pursue education and carry on business. This change of political philosophy allowed for the emergence of a woman supreme ruler.

Up until her time and afterwards too, the Emperor of China could only be a man. The empresses were decidedly secondary in official rank (or much lower than second) though they might actually have been the real ruler. To call herself the Emperor, Wu Zetian upset centuries of tradition and started her own very short-lived dynasty.

Wu Zetain was born Wu Mei (武媚)on February 17, 624, to a wealthy official of the Sui Dynasty. Her father was a supporter of Li Yuan (who later became first Tang Emperor Gaozu) during the rebellion. Her father gave her a high education, and she read widely and was intelligent.

She was so beautiful and intelligent, that the second emperor of the Tang Empire, Emperor Taizong, selected her as a concubine (around 636–638). Her literary talent proved useful to him, so she acted as his secretary, and so she became acquainted with imperial affairs and the details of running the empire.

When Emperor Taizong died, Wu Zetian became a Buddhist nun for a while. But third Tang Emperor Gaozong wanted her for a concubine. It is said Wu Zetian killed her own daughter in order to have the official empress deposed. Once she was empress, she took over official functions and began commanding officials directly.

When her second husband died, Wu Zetian exiled his son who would have succeeded him for the throne, and made a younger son emperor in his place: Emperor Ruizong. However, Wu Zetian was the one controlling the empire. She killed or deposed officials and put supporters loyal to her into place in the empire's government.

Eventually Wu Zetian made herself Emperor by forcing Ruizong's resignation, and officially started her own dynasty: the Zhou Dynasty (690–705). Wu Zetian was the only female emperor in history, but her official reign as emperor wasn't long, because she was already 66 when she assumed emperorship.

When she was 81, Wu Zetian was too old to defend her position, and others forced or tricked her to abdicate. It is said that she confessed to her crimes publicly before her death when she was 82 (December 16, 705).

It is also said that Wu Zetian arranged for a stele or stone monument marker to be erected by her tomb, but she stipulated that nothing be written on it. So the unique female emperor in 2,000 years of imperial China also had a unique imperial burial monument. However, in later centuries people did carve writing on it.

During her reign, the empire prospered, and her armies beat off attacks from surrounding peoples. She is famous for being hard working and intelligent, and instituting political and economic policies that made the Tang Dynasty powerful during her reign.

One of her main goals was to make sure that she was safe, so she created a secret police and guard. She knew that she needed to recruit officials to replace those who were in power since they would prove disloyal. So she worked hard to find the best and brightest people to help govern the country and replace the former officials, staff, and generals.

She lowered taxes on the peasants, and the common people prospered. She instituted reforms to make the agriculture and the economy of the empire more productive, and she promoted serious research to increase agricultural production.

You can learn more about Wu Zetian and her dynasty by touring theQianling Mausoleum, where she was buried next to her second husband Emperor Gaozong. It one of the best preserved of the eighteen imperial mausoleums constructed by the various Tang emperors.

The large mausoleum is also one of Xi'an's favorite historical sites. There are three adjoining rooms with well-preserved wall paintings and architecture.

How to Get to Qianling Mausoleum

China Highlights can help you customize a visit to this mausoleum and other historical sites in Xian, or just see our Xi'an tours. Most of our tours don't go to the Qingling complex, but we can customize a tour there.

4-Day Xi'an Ancient Memories Tour: This four day tour will take you to the Qianling Mausoleum along with other famous historical sites.

11-Day Majestic Yangtze River and Xi'an Tour: Cruise the Yangtze and visit the highlights of Xi'an, Shanghai, Beijing, and Chongqing. Tell us you want to visit the Qianling Mausoleum, and we'll tailor it in.