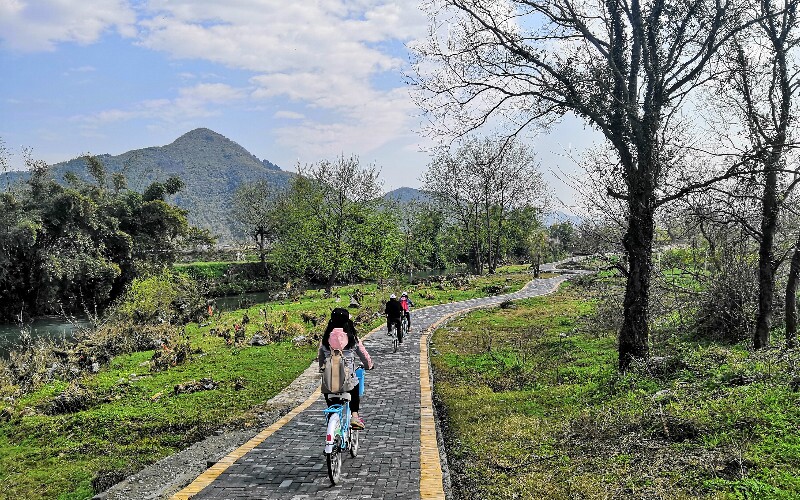 Near Guangzhou, there is a surprisingly tall waterfall and an interesting area with parks and lychee tree groves. Though the city of Guangzhou is densely populated and seemingly flat, you can bike along two routes to get to Baishui Village (白水寨 Baishui Zhai) and see the Baishui Village waterfall (白水寨瀑布 Baushui Zhai Pu Bu). The waterfall is officially 428.5 meters or 468.6 feet tall. If you go there when the fruit is ripe, you can also enjoy a lot of lychees. Along both routes, you can pass by park area. So these may be two good bike escapes for you. A shorter route starts at Licheng and goes to Baishui on a bike path, and the other one takes the expressways and highways from the Zengcheng area of Guangzhou itself.

You can ride from Zengcheng (增城; Zēngchéng) in Guangzhou to Baishui Village. Zengcheng is northeast of Guangzhou's city center, and it is officially under the administration of Guangzhou  and is part of Guangzhou. If you bike there along the expressway and highway, you can see some farms and countryside life. At Baishui Village, you can see a tall, narrow waterfall. If it is rainy, the waterfall is even sort of spectacular with white treads and streams falling down from three ridges against the deep green background. The water throws up a mist that Chinese people think is healthful to breathe due to its high electronegativity. The waterfall is probably named after this white water because Baishui means 'white water' in Chinese.

The biking trip takes around three hours or so. Along the way, there is a park called Xiaolou People's Scenic Area 小楼人家 Xiao Lou Ren Jia) that you might want to stop at. The distance traveled is about 45 kilometers or 28 miles. The travel speed of about 9 mph is suitable for most people. It isn't very fast.

You can see farms and orchards. This area near Guangzhou is well known for its lychee groves. There are several varieties of lychee fruit produced there. This nutritious fruit tastes like root beer when it is very ripe, and it is full of trace elements and healthy vitamins and minerals. When you eat it, you may get stronger. The various varieties look very different, and fresh lychee fruit is rare in the West. So, this is a place to buy a lot of it in high summer in June and July. So taking a trip out to Baishui Village can keep you healthy.

Instead of biking to Baishui, if you get there another way, you can rent bikes in Baishui and bike around in there. There are one-man, two person and three-person bikes; and the charges range from 15—25 RMB (2.3—3.8 USD).

Biking from Licheng to Baishui Waterfall

Time needed: around one hour

Alternatively, you can start from nearby Licheng (荔城) that is about 20 kilometers or 12 miles away and bike there on a bike route for about an hour. There is a special lane for cyclists on the weekend.  Find the colorized bicycle roadway from Licheng and set off. This is a scenic route. You'll go through woods where you might hear birds tweeting. You can stop along the way and talk cheerfully and humorously under the trees along the road. You might find lychees or longans to pick up. The route crosses a river, and you can try to walk along the bank. The route ends in Baishui.

Nearby Attractions: There is a step path near the waterfall that is said to have 9,999 steps. The steps are cut in the rock or are made of wood. So you can really enjoy step climbing for a long time. This path extends 6 kilometers or 4 miles.
Lychees: Various varieties of the fruit trees fruit at various times. But the common variety ripens in June and July.
Price: Entering the Baishui Waterfall park costs 70 RMB.

China Highlights can help you design a tour to bike around Guangzhou, or just see our Guangzhou tours.