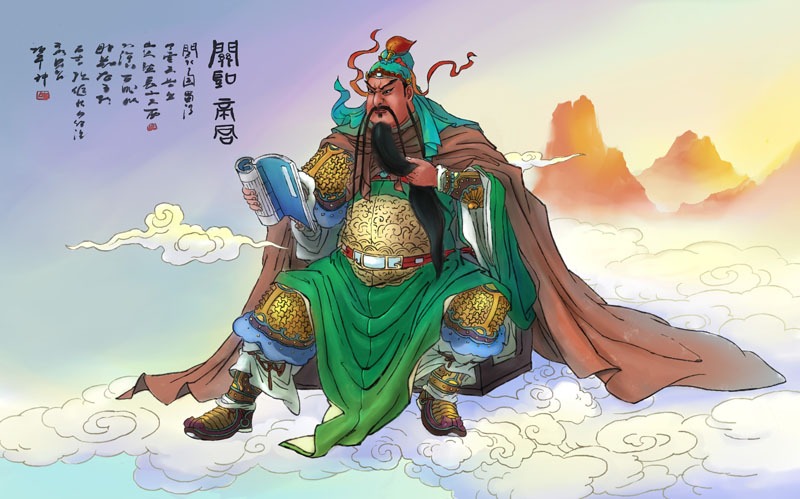 Guan Yu (160–220), a famous general at the end of the Han Dynasty era (206 BC – 220 AD), was one of the best known historical figures in ancient Chinese history. Guan Yu was highly skilled in military affairs and his loyalty has been highly praised for generations.

Guan Yu was a major character in “Romance of the Three Kingdoms”, a semi-historical novel written by Luo Guanzhong at the end of the Yuan Dynasty period (1279–1368). Stories of Guan Yu’s exploits were romanticized in the novel.

Guan Yu's early life was barely recorded. We only know a little. Guan Yu was first called Changcheng (‘Long Life’). He was said to have been born in Xie Xiang (‘Xie County’ in present-day Shanxi).

Due to a serious offence, he had to flee. Perhaps guided by fate, he fled to Zhuojun, where he met Liu Bei and Zhang Fei and joined their army fighting against the Yellow Turban Rebellion.

Later Liu Bei became a ruler in Shandong. Shandong is known in history as a place where rebellions start. He made Guan Yu and Zhang Fei generals. They protected Liu Bei from every danger.

The story of the Peach Garden Oath in “Romance of the Three Kingdoms” is widely known. Liu Bei, Guan Yu, and Zhang Fei held a brotherly ritual in a peach garden. Guan Yu recognized Liu Bei as his elder brother and Zhang Fei as his younger brother.

From then on, they fought side by side, supported each other, and were loyal to each other. Despite being fictional, the Peach Garden Oath has become a symbol of fraternal loyalty.

One of the unusual things Guan Yu did was that he served both his long-time leader and friend Liu Bei and their enemy leader Cao Cao well.

Guan Yu was once captured by Cao Cao. Cao Cao appreciated Guan Yu so much that instead of killing him, he made him a general.

At that time, Liu Bei was defeated and fled without trace, leaving his family behind. In order to take care of Liu Bei's family, Guan Yu had to stay with Cao Cao for a time.

Guan Yu won the Battle of Baima for Cao Cao. Cao Cao offered Guan Yu many rewards in the hope that he would stay. But Guan Yu was unmoved and eventually returned to Liu Bei.

At the end of the Eastern Han Dynasty (25–220), powerful politicians fought for supremacy. In addition to Liu Bei, Cao Cao, and Sun Quan, there were many other leaders, including Lü Bu.

In recorded history, although Guan Yu and Lü Bu were enemies, they never actually fought each other. It is hard to say which of them was stronger.

Guan Yu once took off the head of an opposing general in the midst of a large number of mounted and foot soldiers, and no one could stop him. Lü Bu was very skilled in archery and riding and could shoot targets 100 meters away.

In the novel “Romance of the Three Kingdoms”, the author arranged a battle between Guan Yu and Lü Bu. As a result, Lü Bu fled on horseback during the siege of Guan Yu, Zhang Fei, and Liu Bei.

The Battle of Fancheng

The Battle of Fancheng was launched by Guan Yu. This battle showed the power and strength of Guan Yu, but it was also the battle that led to Guan Yu's death.

Due to continuous heavy rain, Cao Cao’s army was trapped by a flood. Guan Yu took the opportunity to order his army to launch an attack by boat.

Cao's army was defeated. Yu Jin was forced to surrender to Guan Yu. Pang De was killed because he refused to surrender. This victory was the most brilliant of Guan Yu's career.

In the middle and late period of the war, Sun Quan joined the war. Because the position of Jingzhou was very important, Sun Quan could not allow Guan Yu to garrison there.

Facing enemies on both sides, Guan Yu had to hurriedly withdraw his troops from Fancheng to Maicheng.

Guan Yu’s Death and His Tomb

Guan Yu lost Jingzhou and retreated to Maicheng after the Battle of Fancheng. Guan Yu was captured by Ma Zhong, a subordinate of Sun Quan's general Pan Zhang, and finally, Guan Yu was killed by Sun Quan.

There are three Guan Yu tombs: Guan Yu’s head was buried in Luoyang; his body in Dangyang, and a Guan Yu cenotaph was built in Chengdu.

Guanlin Temple in Luoyang is the final resting place of Guan Yu's head. After Guan Yu was beheaded by Sun Quan, his head was sent to Cao Cao as a tribute, as well as to shift the blame. Cao Cao gave Guan Yu a funeral befitting a hero.

Cao Cao ordered a wooden body to be buried with the head so that Guan Yu would be complete and intact in death. It was also a ploy by Cao Cao to break the alliance between the State of Wu and Shu.

The tomb of Guan Yu in Chengdu is a cenotaph built by the Shu State for the worship of Guan Yu.

Guan Yu has been worshiped by generations in China and to some extent globally. Guan Gong (Lord Guan) is a commonly used deity name. He was honored as a god of war and wealth.

It is said that there is a shrine for him in every Hong Kong police station. He is also a patron god of members of the triads and gangs.

Merchants venerated Guan Gong as the god of wealth. They believed Guan Gong would bless them with good fortune and business and protect their wealth.

Guan Yu is admired by three major religions in China. For Confucians, he is a warrior sage. For Taoists, he is ‘Holy Ruler Deity Guan’. And for Buddhists, he is the Sangharama Bodhisattva.

Why did Guan Yu become a god?

Guan Yu’s loyalty and righteousness, which conform to traditional Chinese cultural ideals were appreciated by emperors, especially from the Song Dynasty (960–1279). China’s emperors valued loyalty very much. They wanted to propagate Guan Yu’s obedience and respect for his superiors. Thus, Guan Yu's status gradually increased from a general to a revered god.

Besides, “Romance of the Three Kingdoms”, written in the 14th century, deepened Guan Yu's heroic image. His reputation has only increased over the years, and Chinese folk religions regard him as a guardian deity for his bravery and fighting prowess.

The Meaning of Guan Yu Statues

A statue of Guan Yu usually stands with a red face (symbolizing loyalty) and hands holding his weapon — the Green Dragon Crescent Blade. The world’s biggest bronze statue of Guan Yu was in Jingzhou, 58 meters (190 feet) tall and 1,100 tonnes (1,200 tons). It had to be removed because its size exceeded revised building standards.

Many Chinese people display a bronze statue of Guan Gong at home for a blessing. Statues in different poses have different meanings and functions:

A statue of Guan Gong riding a horse