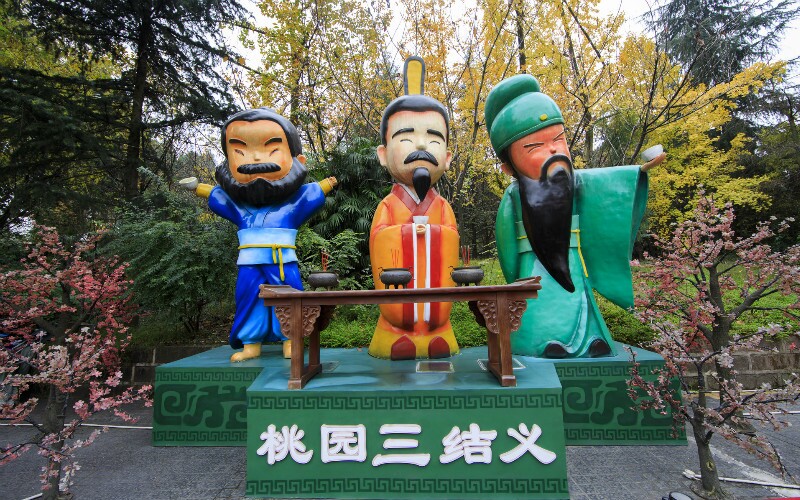 The Han Empire ended with natural disasters and rebellions weakening the power of the court.

There were also great court conflicts that ended in much killing of royal clan members, imperial eunuchs and officials, and their staff and guards. The last Han emperor took refuge with regional leader Cao Cao.

The Battle of Red Cliffs and the 3-Way Split

At the Battle of Red Cliffs in 208, Liu Bei and Sun Quan allied and beat Cao Cao. China was divided into three regions, but the Han Dynasty lived on tenuously in the north with Cao Cao.

In 221, Liu Bei named his new kingdom Shu Han, and in 229, Sun Quan took the title of the King of Wu, officially completing the three kingdoms.

The Cao Wei regime had developed very fast when Cao Cao was alive, and when Cao Pi established the kingdom, its territory occupied the whole of what was then northern China.

Cao Cao was born in an official aristocratic family. When the Han Dynasty was coming to an end, he built up his army and brought other dukes' territories under his control. It took Cao Cao 7 years to conquer the northern area and unite it. The emperor of Han made him the King of Wei.

After Cao Pi took over the Wei throne from his father Cao Cao, he suppressed internal rebellions and built up his army. He forced the last emperor of the Han Dynasty to give him his throne in 220 and named his kingdom Cao Wei.

The Wei Kingdom's Demise and the Sima Family's Rise

When the third emperor of Wei, Cao Fang (reign: 239-254), took the throne at 8 years old, he was assisted by Sima Yi and Cao Shuang. Cao Shuang was arrogant and even imprisoned Empress Dowager Guo.

In 249, while Cao Fang and Cao Shuang went to Gaoping tomb to worship the previous emperor of Wei, Sima Yi went to Empress Dowager Guo and requested removal of Cao Shuang's family. He then led an army to defeat Cao Shuang.

Sima Yi gained much power and influence and his family grew stronger until it was strong enough to threaten the Wei regime. Cao Fang didn't dare to suppress the Sima Family.

Cao Wei Kingdom was Succeeded by Jin Kingdom at 266

Eventually, Cao Fang was deposed, after Sima Yi forced Emperess Dowager Guo to ally with him.

In 266, Sima Yan (Sima Yi's grandson) forced Cao Huan, the last King of Wei, to abdicate, and replaced Wei with the Jin Kingdom.

It was not easy for Liu Bei to established Shu Han Kingdom. Liu Bei was one of the descendants of the King of Jing in the Han Dynasty era, but his family fortune declined. His father died early and his mother made money by selling straw mats and straw sandals.

He had a nice personality and made friends with many heroes and prominent figures. He built up his army with businessmen's sponsorship, but was still very weak. He relied a lot on other dukes' help, including Cao Cao.

In 208, Liu Bei got famous general Zhuge Liang's help and united Sun Quan and Zhou Yu to defeat Cao Cao in the Battle of Red Cliff. He thereby won some territory. From 209 to 219, Liu Bei conquered more states and expended his territory. In 221, Liu Bei established the Shu Han Kingdom at Chengdu, and ruled for two years.

In 219, Liu Bei's general Guan Yu was killed by Sun Quan, king of the Dong Wu Kingdom. Liu Bei wanted to revenge Guan Yu, and planned to send another general Zhang Fei to conquer Wu. But Zhang Fei was killed by his subordinates before his departure.

From 238 to 262, the Shu Han kingdom lunched 11 northern expeditions to attack the Wei kingdom. They won more than they lost, but the wars used up a lot of food, money, and human recourses, which weakened Shu.

In 263, Wei invaded Shu, and Liu Shan, last king of Shu, surrendered to Wei. He was allowed to live out his life peacefully in Luoyang, Wei's capital.

From 222 to 225, Cao Wei launched three wars against Dong Wu but didn't accomplish anything. In 228, Wei attacked Wu again, and was beaten badly by Wu. In the relatively peaceful 24 years that followed, Sun Quan established the Dong Wu kingdom in 229, and Wu prospered.

A migration of northern people south, and the subjugation of the Shanyue people, increased Wu's population and their agricultural production.

Wu's Decline and Demise — Surrender to the Jin Kingdom in 280

In 252, Sun Quan died and his son Sun Liang ascended the throne when he was only 10. From then on the kingdom of Wu headed towards decline.

In 279, the Jin Kingdom mounted a large-scale attack on Dong Wu and won. In 280, Sun Hao, last king of Wu kingdom surrendered.

One of China's Four Classics — The Romance of the Three Kingdoms

The Romance of the Three Kingdoms is a famous semi-historical work said to be written by Luo Guanzhong around 1368 AD.

The author portrays the wars and the lives and struggles of the rulers of the Three Kingdoms Period. Special emphasis is laid on Liu Bei and Cao Cao. This historical fiction colors modern Chinese thinking about the era.

If you want to visit the Three Kingdom's key places, see our popular itineraries below for inspiration.

If you can't see exactly what you want, you can customize your itinerary or use our tailor-made service.