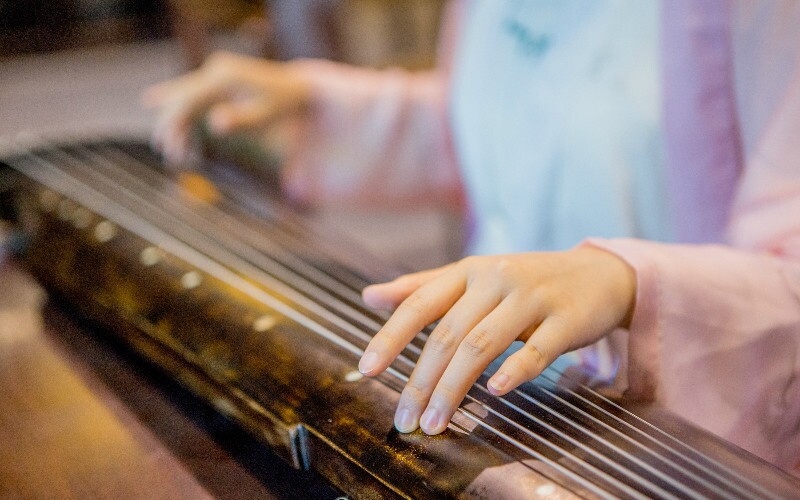 The guzheng (a kind of Chinese zither) was the most popular instrument in China in ancient and medieval times. It has more than 2,500 years of history. There are 21–26 strings on the modern guzheng. The length of a traditional Chinse guzheng is 1.63 meters (5’4”).

It is usually played by a female musician sitting on a chair in front of the instrument. Players always wear fingerpicks made from plastic, resin, or other materials. Guzheng players often perform solo. Modern guzheng instruments are often played by pinching the strings to play heptatonic notes and chords.

One of the classical melodies played on a guzheng is ‘High Mountain and Running Water’ (高山流水).

The erhu is a two-string, violin-like instrument that is played with a bow like a violin bow. It is also known as the Chinese violin in the Western world. Erhus are often played in Chinese opera performances and traditional orchestras.

People are playing the Erhu in the park

Erhus generally retain their traditional tuning system, so they may sound odd to Western ears. It allows for a high degree of virtuosity, covers three octaves, and can be made to imitate the sound of Chinese singing as well as birds and horses. It produces a melancholy sound.

The dizi or hengdi is another popular Chinese musical instrument. It is a kind of Chinese transverse flute that is often played in Chinese folk music or opera. Dizis generally have six or more finger holes. One hole is covered with paper so that the flute has a peculiar buzzing sound that people like.

A man is playing Dizi

Most dizis are made of bamboo. Some of them are made of wood, plastic, stone, or even jade. As they are easy to make and carry, the dizi is very popular with Chinese students and folk music lovers. There are several kinds of dizi flutes, such as the qudi and bangda, which mainly vary in length. The longer ones like the changdi allow for deeper sounds.

One of the popular music pieces played on a dizi is ‘Moon on Guan Mountain’ (关山月).

The pipa is a traditional Chinese musical instrument with four strings. The instrument has a pear-shaped wooden body with frets like those on a guitar. The number of frets ranges from 12 to 26.

Modern pipas have been re-engineered to fit better with Western-style music. Steel strings are now used, so players wear special finger plectra. Pipa musicians are mainly seen on stage or perhaps as entertainers at special parties or restaurants.

The pipa has been played for more than 2,000 years in China. There are many ancient stories and poems about this instrument. One of the famous stories is about Wang Zhaojun, who was sent to the northwest of China to marry a ruler to keep the peace between two nations.

On the way to the new place, Wang Zhaojun felt sad and homesick on her saddle. She took out her pipa and played sorrowful melodies. It is said that a flock of geese flying southward heard the music and forgot to flap their wings and fell to the ground. From then on, Zhaojun got the nickname ‘falling geese’ or ‘dropping birds’.She was one of the ‘four beauties’ fabled in Chinese history. The melody she played was called Zhaojun’s Lament (昭君怨), and it is often played in Chinese opera.

The guqin is one of the oldest plucked instruments in China. It is also called the qixianqin or ‘seven-stringed zither’ (七弦琴), as it has seven strings. The guqin’s main part is a long, narrow wooden soundbox.

A girl is playing the Guqin

It can produce sounds of great subtlety and refinement, which are favored by many great scholars and musicians. It is said that Confucius liked to play the guqin when he was teaching his students. The guqin is known as the ‘father of Chinese music’ or the ‘instrument of the sages’ by the Chinese. It is generally representative of traditional Chinese musical culture.

The famous melodies Gao Shan 《高山》 (‘High Mountains’) and Liu Shui 《流水》(‘Flowing Water’) are played with the guqin. These guqin pieces were originally played by a famous Chinese musician called Bo Ya, who had a close friend called Zhong Ziqi who fully understood Bo Ya’s music. Bo Ya broke his guqin after Zhong Ziqi died. These melodies have also been used to express the ideal of real friendship by the Chinese. In Chinese, zhiyin (知音, literally ‘to know the tone’) means a close friend.

The hulusi, a kind of free-reed wind instrument, is one of the musical instruments specially associated with Yunnan (and South China) ethnic minorities. A hulusi has three bamboo pipes and a gourd wind chest at the end with the mouthpiece. The center pipe has finger holes while the two on both sides are the drone pipes.

Because of its unique and beautiful sound and simple, gentle, and elegant appearance, and because it is easy to learn, the hulusi is popular with primary and middle school students, music lovers, and China travelers from home and abroad. ‘Phoenix Tail Bamboo under Moonlight’ (月光下的凤尾竹) is one of the most famous melodies played on a hulusi.

The suona, also called the laba or horn, is a kind of Chinese wind instrument. It is made up of a wooden body and a tubular brass or copper bocal to which a small double reed is affixed. It has a metal bell-shaped mouth.

The suona has long been an important musical instrument in northern China for weddings and funeral processions because of its keen and resonant sound. The suona is also used for yangko folk dances, alongside drum music, and to accompany local opera and ballads.

Classical melodies played on the suona include ‘Birds Paying Homage to the Phoenix’ (百鸟朝凰) and ‘A Flower’ (一枝花).

The xiao (/sshyao/), also called the dongxiao (洞箫), is a Chinese vertical end-blown flute. Usually, it is made of bamboo and has holes on the top. It is said that the xiao was developed from an end-blown flute that was used by the Qiang ethnic groups of Southwest China in ancient times. The playing techniques for the xiao are like those for the bamboo flute. The xiao is most suitable for playing long, quiet, and sentimental songs.

A man is playing the Xiao

The xiao’s sound is thought to have the sweetness of the phoenix's call. The phoenix is regarded as the king of birds in Chinese culture.

The melody named the ‘Autumn Moon Over the Calm Lake’ represents the sound of the xiao perfectly.

The Chinese drum, also called the tanggu (堂鼓 ‘hall drum’), is a traditional Chinese musical instrument. The tanggu is a medium-sized drum with a barrel shape. The two heads of the drum are made of animal skin (mostly buffalo hide).

It is played with two wooden sticks. The tone of the sound produced by the drum depends on the strength of the hit and which part of the drum skin is hit. According to their size, tanggu models can be divided into small or big. The bigger the size of the drum the lower pitch sound.

The famous work ‘Fisherman's Song of the East China Sea’ (东海渔夫) is performed with a tanggu.

The bianzhong is a kind of ancient Chinese musical instrument. It is also called the Chinese chime bells. Chime bells are a set of bronze bells hanging on a big bell cot, arranged according to different tones of bells. Using a wooden hammer or bar to knock the bronze bells produces different sounds.

China is the earliest country to make and use chime bells, which can be dated back to from 2,000 to 3,600 years ago. Chime bells were the major instrument used for China's ritual and court music in ancient times. The melody ‘Moon and Flower in the Spring River’ (春江花月夜) is representative music of the bianzhong.