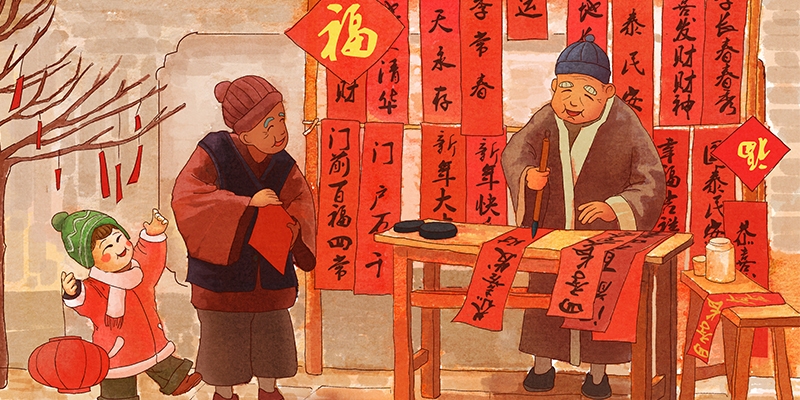 Chinese New Year has undergone great changes over the last half century due to economic development and social evolution. Although celebrations have changed hugely, the Spring Festival has always been China's most important festival. Below we take you decade-by-decade through the changes...

Chinese New Year in the 1960s - Food Scarce and Rationed

Government decorations: Production brigades were ordered to clean the streets and lanes and decorate them with colorful flags and banners for the Spring Festival. People hung portraits of Chairman Mao in their communes and pasted spring couplets themed with slogans and fervent hopes of a good harvest.

In the 1960s food was rationed and there was no money - commerce was eradicated. Just before the Spring Festival, the government gave every family a special New Year coupon. People rushed to the state-owned markets and queued to buy clothes and basic items they could not get normally.

Chinese excitedly gathered in public canteens to enjoy their biggest meal of the year: maybe a plate of tofu dumplings. After dinner, families huddled around communal stoves, waiting for the new year.

CNY in the 1970s - Meat for CNY Dinner, Traditions Reemerge

The whole family got together to make dumplings.

Windows and doors were decorated with red paper-cuts and couplets with Chairman Mao's poems.

Whole villages eating and celebrating together continued in the 70s, but the New Year's Eve meal was slightly better than in the 60s: usually dumplings with pork and vegetables.

Transistor radios were in fashion, and workers enjoyed a rare respite after the celebration dinner - sitting together and listening to radio broadcasts.

By the end of the 70s the use of money was returning. Children enjoyed the happiness of their only new clothes of the year, and received red envelopes with up to 0.5 yuan (then about 30 cents). It was considered an extravagance then to spend 20 yuan (10 dollars) on New Year.

CNY in the 1980s - Families Reunited, Black and White TV

Preparations: Communes disbanded in 1983 and extended families could celebrate together again without asking permission. As New Year approached, women would make a wide range of traditional new year foods at home.

Still poor, the people's living standard improved dramatically due to Deng Xiaoping's reforms, so new clothes were something everyone could afford, not just at New Year.

Food: For the New Year's Eve dinner, dumplings were no longer the only dish. A variety of foods made a still rare appearance: pork, chicken, fish, many vegetables, rice cakes, candy, etc.

Money spent: Children particularly enjoyed the relative abundance of food and gift money. Kids' red envelopes were usually 5 or 10 yuan, which was enough for them to be excited for a long time.

The total cost of Spring Festival was about 100 yuan per family. Fireworks were a must on the eve of the Spring Festival, but people couldn't afford many.

Food: In the 1990s retail developed significantly. People for the first time bought New Year goodies from supermarkets or grocery stores instead of making them at home. Some families chose to enjoy their reunion dinner in big restaurants or hotels.

Travelling: Staying home or visiting relatives were not the only things Chinese did: domestic travel has become an accepted option for some young people.

Money spent: In the 1990s the cost of the Spring Festival was about 300 yuan per family, including red envelopes for children of 20 or 50 yuan.

Shopping online: With the eye-dazzling development of the Internet, many people prefer to shop for the Spring Festival online. People can buy everything and have it delivered without leaving home, including food, spring couplets, lanterns, etc.

While watching the CCTV Spring Festival Gala, people have the chance to win cyber red envelopes by shaking their phones ceaselessly. The 2015 Gala gave out 500 million yuan (about USD 80 million) in gift money during the four-hour show.

Dinner: It is commonplace nowadays for families to have their reunion dinner in a posh restaurant at highly inflated costs. City people find it more relaxing and convenient to eat out on this special occasion compared with the burden of having to prepare an elaborate meal at home. China is now over 50% urban, compared to 15% 50 years ago.

Firework shows: Many cities have arranged firework shows in public squares as major cities have banned private fireworks for safety and pollution reasons. The rest of China show off their disposable income by how many fireworks and firecrackers they can let off.

Travel overseas: More and more Chinese travel to tourist spots or even overseas for CNY. Warmer Singapore, Malaysia, and Thailand are the most popular destinations for Chinese people during this winter holiday.

Money spent: In recent years, it's common for even poor people to spend over 2,000 yuan on Chinese New Year. Red envelopes for Children are now from 100 to 500 yuan.

Travel with us to explore how Chinese people celebrate the New Year and experience China's traditional culture. Here are some recommendations: