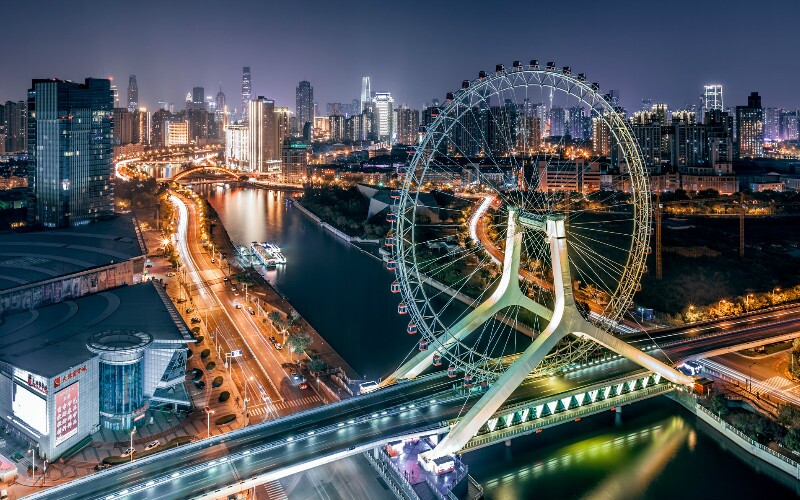 Just like much of the Western world, China uses a five-day workweek that spans from Monday to Friday, with Saturday and Sunday off. The normal business hours are from 8 a.m. to 6 p.m., with two-hour break from 12 p.m. to 2 p.m. However, there are local variations in different sectors and cities. Particularly with those in western China as they still follow Beijing time.

Public institutions such as government offices and schools open around at 8 a.m. or 8:30 a.m., and usually close around 5 p.m. or 5:30 p.m. with a two-hour lunch break at noon. These are open from Monday to Friday, and usually close on Saturdays, Sundays and public holidays.

Private companies usually open at 8:30 a.m. and close at 6 p.m., with one or two hours noon break. Though usually open from Monday to Friday, some companies may have some staff on duty at weekends.

Financial institutions such as banks and post offices open daily from 9 a.m. until 5 p.m., with a 2-hour or 2½-hour lunch break from 12 p.m. with reduced staff.

They close Sundays and public holidays, and their business hours may be shortened or they may be closed on Saturday afternoons.

You may also want to see A Practical Guide to Using Chinese Currency.

One can find self-service banks and ATM machines that are operational 24 hours a day. However, one major factor to take note of is that most ATM's, even in popular areas, are not re-filled over weekends and public holidays, and as a result may not have any cash available during this time.

It is also worth noting that since ATMs in China allow you to perform basically any banking function they can get quite busy. Besides the possibility of having no cash in them be prepared for long lines on Monday mornings at popular ATMs.

Hotels and hospitals offer round-the-clock services every day. Hotels will generally always have someone on the front desk day or night. Hospitals, as you may expect are always open, as are the emergency numbers in China.

If you find yourself in any medical emergency be sure to dial 120 for an ambulance. Community clinics are also open every day from 8:30 a.m. until after 10:00 p.m. See more on Dealing with Emergencies in China.

Tourist attractions can be visited every day from 9 a.m. until 5:30 p.m., with some keeping open later into the evening during summer time. Museums usually close for one day during the working week (usually Mondays), and extend opening hours by one or two hours on public holidays and summer/winter breaks.

You may want to see How Tourism in China Differs from in the West.

Restaurants and bars start doing business from around 10 a.m. until late at night, and usually extend their business hours during weekends and holidays. Some bars remain open until the early hours of the morning, whilst some simply do not close throughout the whole night. In more popular cities it is entirely possible to go drinking in bars indefinitely as you cycle through those opening and closing.

Shops such as convenience stores, supermarkets and department stores open every day for long hours from 9 a.m. until 10 p.m., including weekends and public holidays.

Small, local shop sand grocery stores open earlier and close later than that time, with some staying open all night as the owners take turns sleeping in a (still visible) bed in the back room.

However, during the Chinese New Year (which occurs in January or February) and other major public holidays, most stores close early in the afternoon on the Eve, with some stores closing completely during this time as the owners return to their home provinces.

Our office hours are 9 a.m. to 5:00 p.m. with our lunch break from 12 to 1 p.m. However, you will always find at least one of our travel advisors on duty to communicate in real time with customers in different time zones. We also have a 24-hour helpline for our customers during their tours.