A Practical Guide on Chinese Money

For the newcomer to any country, it is crucial to get a feel for the currency, as well as how to obtain it and how most wisely to use it. China is no exception. Indeed, it presents some unique challenges. This practical guide to money in China will help you prepare for your visit. 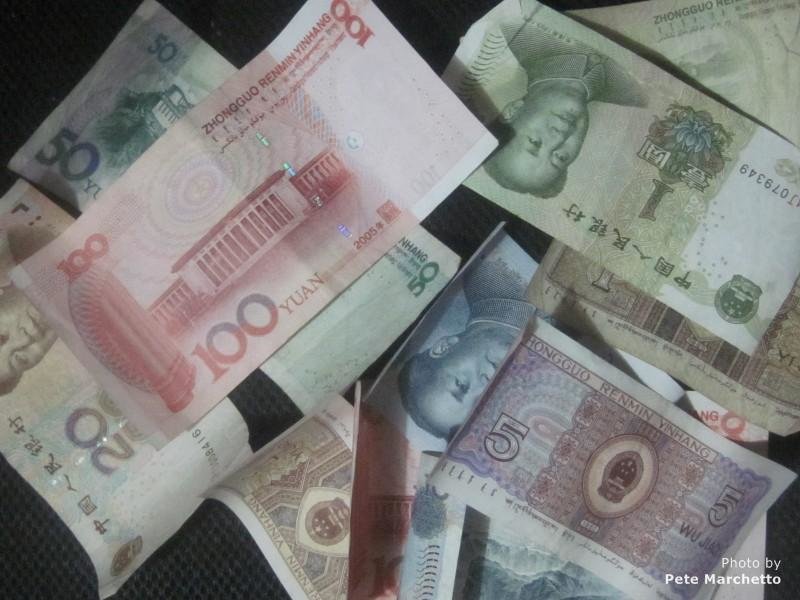 A selection of bank notes

The official Chinese currency is the Renminbi (RMB or CNY). This translates as 'the people's money'. The basic unit is the Yuan, and you will most commonly see it signified with the Chinese character 元 in shops. For ballpark calculations, reckon on six RMB to one United States dollar. In conversation and in shops, you may also hear the amount signified with the use of the word 'kuai'. Thus 'san kuai' or 'san kuai qian' would mean 'three yuan'.

The yuan itself divides into ten jiao, or mao. These, in turn, divide into ten fen, but fen, (though notes are still issued), are now too devalued to be of any practical value and you will rarely, if ever, see the bank notes associated with them. The yuan itself comes in paper denominations of 100, 50, 20, 10, 5, and 1. 2 yuan notes are occasionally seen, but these are going out of circulation. Coins come in denominations of 1 yuan, 5 jiao, and 1 jiao.

One practical consideration arising from this is the relatively low value of the highest denomination (100 yuan) bank note in China when compared with other currencies. If you intend making any large cash transactions while in China, bear in mind that you will need to consider your security in carrying such a conspicuous volume of money around with you.

Credit cards and bank cards associated with China's own 'Union Pay' system are becoming ubiquitous in their use, but foreign credit cards are still limited when making purchases. Luxury outlets such as five-star hotels and some department stores catering to foreign clientèle may see your plastic getting the attention you believe it deserves, but in China generally foreigners are thin on the ground, and there is little purpose in emporia providing for their use. Expect to pay in cash most of the time.

Carry Chinese cash: Most establishments in small cities and the countryside don’t accept foreign bank cards. So you must carry sufficient yuan for any shopping/eating/transport and non-pre-paid activities you want to do.

Exchange major foreign currency (USD, EUR, GBP…) in large denominations at the airport, branches of the Bank of China, and large hotels in China.

Most five-star hotels will have a foreign exchange service dealing with both cash and with travelers' checks. However, rates may be uncompetitive with the banks, and these are your best option. Most banks will be able to make an exchange, but forms will need to be filled in with questions that, at times, seem a little intrusive, such as your purpose in changing the money. It is best to answer any such questions with the most innocent answer given it is all-but inconceivable there will be any follow-ups unless your answer looks like it may lead to trouble. You will also be required to show your passport.

Banks will only accept foreign bank notes that are undamaged. Notes that are even slightly torn will be rejected.

Travelers' checks can be a secure solution if traveling for an extended period, but we now don't recommend them as ATMs and currents exchange are easier and more readily available solutions. However, please note that these may not be recognized in many places, so it is best to change them in advance at a bank or some other outlet before disappearing off into the rural hinterlands. 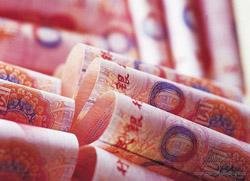 Renminbi, the official currency in China

In only recent years, more and more banks around China have made this possible to the extent it is becoming standard. You should not have a great deal of difficulty with this. However, if using an ATM to make a withdrawal, please be sure to check out our item on ATMs. These machines may not be as welcoming as they are back home.

For availability in China, check the Western Union site for locations. http://www.westernunion.com/info/selectCountry.asp Please note, there will be a fee charged for transactions, and it would be best to check the amount before one is undertaken. In conjunction with the China Courier Service, Western Union has been running a wire transfer service under the name of 'Money Transfer'. However, it is best to check if this service is still available and the rates it charges in advance. If it is in operation, it permits instant money wiring to and from some 100 countries.

Changing Yuan Back to Your Currency 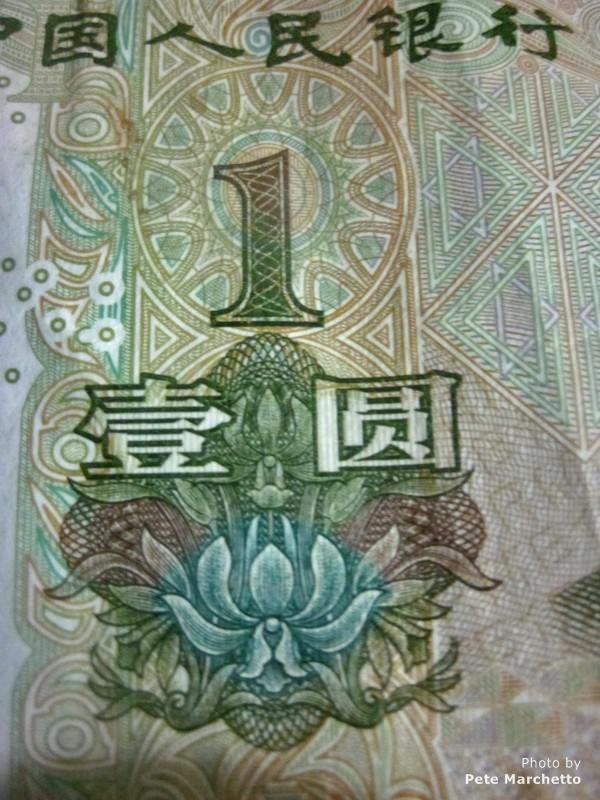 Close-up on the 1 yuan bank note

The RMB is becoming increasingly transferable overseas, but is still largely restricted. Do not overchange your foreign currencies, or you may end up taking so much wallpaper home with you, even assuming you're permitted to take it out of China (the maximum allowable through China's customs check is 20,000 RMB). RMB may be readily changed in Hong Kong if you're stuck with a large amount of it. Limits tend to be set on how much RMB you can change to a foreign currency in a single day in China itself, and these limits may be fairly low. Whether you're even able to do that is dependent on what foreign currencies that particular branch has available on that particular day.

One thing you must do is save all your receipts for foreign currency to RMB conversions. This will smooth the path when it comes to changing money back again, either at a bank or, possibly, at the airport upon your departure, though as always with such matters in China it is best to check if this is possible in advance.

Please remember that changing money with currency traders who wait outside banks is illegal, albeit that they may offer you a better rate, not present you with bureaucratic red tape complete with impertinent questions, and they may also conduct the transaction in the bank itself through one of the tills in order to reassure you that the money they present you with is not counterfeit. But still, it's naughty. Don't do it.

Stability of the yuan

The yuan tends to be protected against large fluctuations through government intervention. Previously pegged to the US dollar, it is now ostensibly pegged to a basket of currencies, but how remains a mystery to such an extent that many suspect it rises and falls according to the government's will. It is unlikely to undergo any dramatic fluctuations, its movements characterised by steady rises and falls over months, even years.

China Highlights Travel currently quotes tour prices in US Dollars. We are currently reviewing our policy in this matter. Should a revaluation of the Chinese Renminbi occur, China Highlights Travel will honor all quotations for tours that have been fully paid at the time of the revaluation. Customers who have not paid for their tour in full at the time of any revaluation will be required to pay the difference between the old and new price calculated in Renminbi.

How to Recognize Fake Money and Other Tips There is fake money in circulation in China and unscrupulous traders particularly look for opportunities to give it in change to foreigners or other unsuspecting people. See also Avoiding Tourist Traps for tricks to beware of. Particularly check 50, 20 and 10 yuan notes. 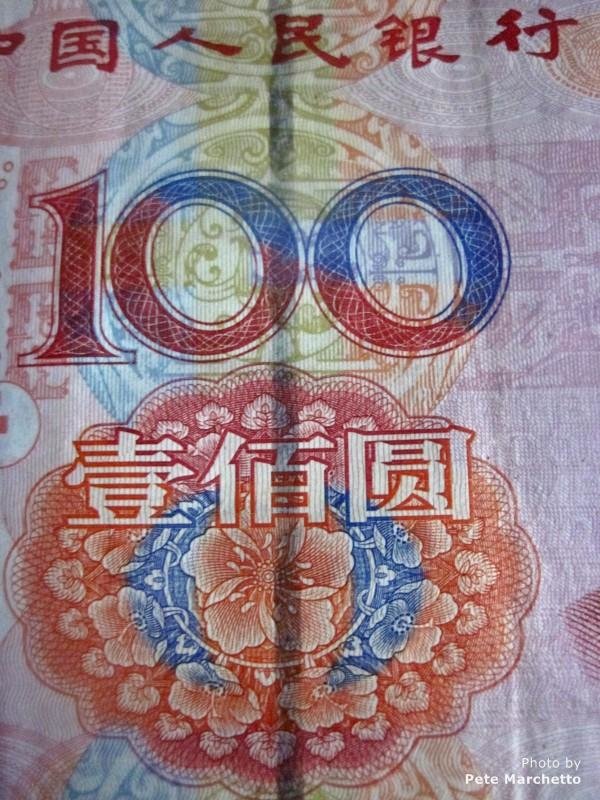 Close-up on the 100 yuan bank note

Given that higher-denomination bank notes are often forged, it is best to carry a selection of lower-denomination notes with you for minor transactions rather than breaking a 100 yuan note and receiving most of it back in change.

With your cash, as well as other valuable possessions, be wary of pick pockets, particularly in crowded areas such as travel hubs. Do not carry your money around with you too openly. In a shop, produce your money and put it away again within the shop itself to prevent passers-by making a note of where you are keeping it or making an opportunistic grab.

When dealing with foreign currencies, foreign bank cards etc. it is best to remember that the regulatory environment in China when it comes to these things can be chaotic. Laws are passed, fall into abeyance, are revived again; foreign finance companies fall in and out of official favor and may be rewarded or penalized accordingly. Things can change without warning, however well-prepared you may be before you set out. As far as possible, keep things simple and check, check, and check again in any large transaction that you know the rules, even if you made another such transaction successfully just a few days previously. Bank staff can prove very helpful and understanding in this given they find the rule changes no less tiresome than their customers. Be patient with them, and you will find the bank's employees are very much on your side, and eager to help.

Finally, it cannot be said often enough... remember to bargain. Particularly in tourist areas, in markets, and on the side of the street, as a foreigner you are a target for price hiking, and some of those hikes can be impressive.

Let China Highlights see you through

Since 1959, we have been guiding foreign tourists in China through its sometimes seemingly arbitrary confusions in terms of their financial transactions for their holidays, along with everything else. We can help you through problems large and small, whether it be supplying you with a full itinerary tailored to your taste and a guide to go with it, or merely supplying you with a knowing person to lead you through the vagaries of the Chinese banking system. Why not contact us and see what we can do for you? 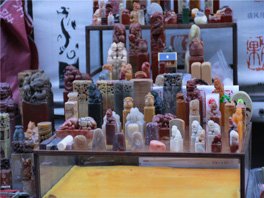 Shopping in China — Things to Buy and How to Buy Them 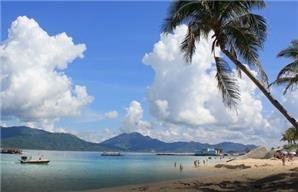