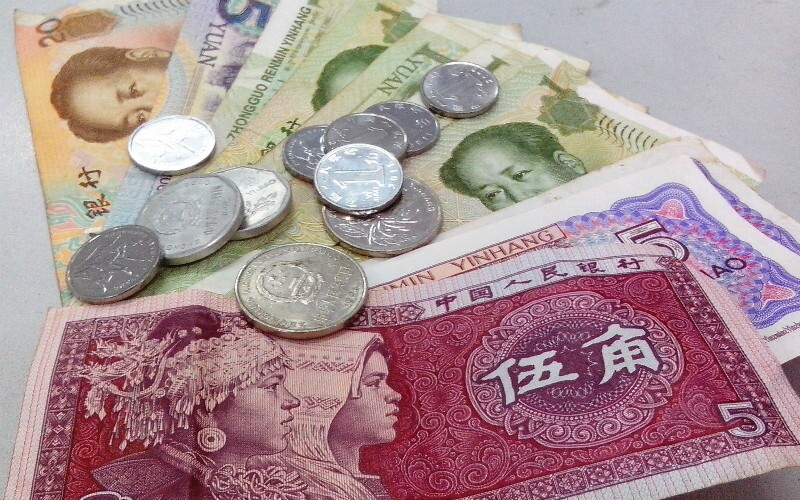 Aside from its practical value, money is made distinctive by the culture in which it rises and evolves. Chinese money is no different, with the bank notes proudly diplaying the face of Mao Zedong as testament to China's recent history. In this guide, beyond the value of money in its purchasing power, we consider its value as a reflection of the Chinese people.

Below is the fifth series of banknotes, commissioned in 1999, with the head of Mao Zedong on the front, and fourth series jiao notes. The 2 jiao note is now seldom seen.

100 Yuan (Reverse Image: The Great Hall of the People, Beijing)

The History of Chinese Money

From Shells to Silver

The 5 jiao note celebrates the diverse heritage of China's people

The earliest form of Chinese money was shells (hence the use of the shell character in many other characters related to value, money and wealth). Money shells were later bronzed. In the period of rival states (770 – 221 BC) different shapes of money were used by different states: knife-shaped, spade shaped, and ant-nose-shaped.

When Qin Shihuang, the First Emperor, united China in 221 BC round coins with a square hole in the middle were introduced and this form of currency was used until around 1890. This is the form of the currency in the nation's popular imagination, and representations of it can be seen in the modern day as symbols of wealth and prosperity.

For higher level transactions, ingots of silver were commonly used. These ingots resemble in their form the classic origami boat children enjoy folding out of paper, and it may be seen on souvenir stalls as the item held aloft in some representations of the Buddha, a symbol of prosperity.

Chinese banking started almost by accident in the 1820s when a successful dyer with a branch office in Beijing was asked by a friend if he might give him some money in Pingyao, his home town, collecting the same amount from the dyer's office in Beijing. This enabled the friend to avoid bandits. Others caught on to this idea and so that hometown, the attractive and well-preserved walled town of Pingyao in Shanxi province, became for a while the financial center of all China.

The end of the imperial era and the turbulent time that followed saw first local mints, then high inflation and financial instability. It was not until the Communist era began in 1949 that a stable currency was established, using mostly notes, and coins for denominations of 1 yuan and lower.

The 1 jiao note celebrates the diverse heritage of China's people

Money forms a big part of the everyday lives of Chinese. Electronic transactions are becoming increasingly common, so expect the frustrations in supermarket queues as everywhere else in the world when someone ahead of you has a handful of items and chooses to pay with a bank card. Checks are rarely used. Cash is still the preferred means of transaction, so notes of various denominations are changing hands all day long, even for quite large amounts.

Becoming rich is a common wish, dream and pursuit, though more and more of the younger generation, not having been to exposed to the difficulties their parents and grandparents faced in times of need, are looking further afield in life for fulfillment.

In China notes are preferred to coins, especially in rural areas, though historically, and up until only about 140 years ago, the coin with the hole in the middle was currency.

'Paper money' (actually yellowy low-grade perforated paper) is even burned for the dead in the belief (or tradition) that it will give them money for the afterlife, especially on Qingming Festival or Tomb Sweeping Day. Replica 100 Yuan Notes are also stuck on tombs.

The basic unit of Chinese currency is the yuan (元 /ywen/), spoken colloquially as kuai (块 /kwhy/). There are 10 jiao (角 /jyaoww/), known colloquially as mao (毛 /maoww/), to the yuan. The fen (分 /fnn/), 1/100th of a yuan, is so seldom used now that fen coins and notes are almost out of circulation.

Apart from the 2 yuan and 1 Yuan Notes these notes from the fourth series are seldom seen in circulation.