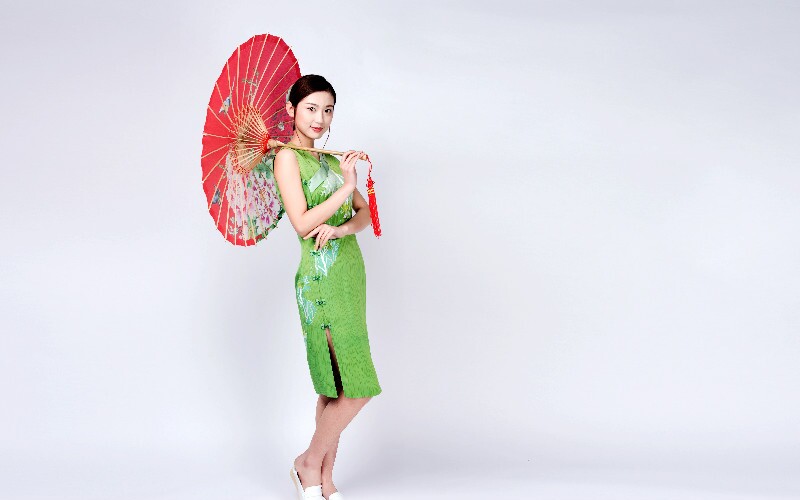 The History of the Cheongsam

Origins of the Qipao

The history of cheongsams can be dated back to the Qing Dynasty era (1644–1912). During the Qing Dynasty’s reign, the Manchu ethnic group people was called Qi people by Han Chinese. So, the long gown (pao) they wore was called a qipao by the Han Chinese. At that time, officials and scholars of the Qing court were required to wear qipaos as their daily uniform.

Further Transformation of the Qipao

At the end of Qing Dynasty, the cheongsam was continuously developed during the Republic of China era (1912–1949). The modernized cheongsam style became slender and tight-fitting with a high cut, which suited the 20th-century tastes of young women in Shanghai and Beijing. Cheongsams also became more and more popular because celebrities and high-class women wore them in formal occasions.

The Republican period was the golden age of the cheongsam. From 1930, the cheongsam became very popular in China with females regardless of their age or social status, but especially with upper-class females. The style of cheongsams also changed to be more fashionable and beautiful. The modernized cheongsam was one of the best outfits for showing a woman’s body line at that time.

Features of Cheongsams in Different Periods

Qing Dynasty: A long rope without sleeves and collars.

Republic of China: Shanghai-style cheongsams had loose, long, and wide sleeves. They became more and more tightly-fitted and body-hugging to show a woman’s curves. Cheongsams were chosen as the national dress for official occasions during the Republic of China period.

1940s: Women wore qipaos with stockings from this time and no longer wore long trousers with qipaos. High heels also became more and more popular for wearing with qipaos.

Parts of a Qipao

There are about six main elements of a qipao: a Mandarin collar, pankou buttons, the ‘large front’, the edging, sleeves, and the length and side slits.

Part one: A Mandarin collar is a characteristic element of a qipao, usually made from a single piece of material. The two ends of the collar fasten at the center of the front of the neck (the jugular notch). The height of the collar range from 4 to 6 centimeters (1½–2½”) depending on personal preferences.

Part two: Pankous are traditional Chinese knotted buttons, which are used to fasten a qipao tightly. There are many kinds of pankou on qipaos. The most common style is the straight pankou. There are about five pankous on each qipao. Two pankous are located along the neck line and another three are set along the side of the chest portion.

Part three: The front part of qipao is called a ‘large front’. The front parts of a qipao can be designed in different shapes or lengths. The pankous decorate and fasten the upper part of the ‘large front’. Nowadays, the right-opening and large-rounded front is much more popular than the straight-slanted front.

Part four: The edgings are finished with at least one of four special edging techniques: gun (‘rolling’), xiang (‘inlaid’), qian (‘embedded’), and/or dang (‘flowing/free’). Some designers use different materials to make the edges look more beautiful and tidier.

Part five: Sleeves can be of different shapes and lengths. Sometimes you will see sleeveless qipaos, which are good for the summer season.

Part six: length and side slits… The length of a qipao ranges from above the knee to ankle length. The side slits of a qipao became more and more popular during the Republic of China period, and now form part of the classic qipao look.

Originating in the Qing Dynasty, the cheongsam has mainly developed into Beijing styles, Shanghai styles and Hong Kong styles. There are many, many differences in decorations, colors, materials, and designs.

The Beijing style is also called the Jing Pai style. As capital of the Qing Dynasty and modern China, Beijing’s cheongsam style is more traditional and conservative than Shanghai’s and Hong Kong’s. The colors of Beijing-style qipaos are much brighter and their decoration is more complicated than other styles’. High-quality Beijing-style cheongsams are hand-made, which means they take a longer time to make, and the price of a hand-made cheongsam is much higher.

At Chinese weddings, brides often wear a white wedding dress and change into a cheongsam for the tea ceremony. Cheongsams worn for weddings are modernized to fit the latest fashion trends.

A cheongsam worn by a man is called a changshan, which means a ‘long shirt’. It is also called a changpao in some cases. The changshan was the official uniform for the Qing Dynasty court. Nowadays, changshans are worn only on special days or formal occasions, such as weddings or important events.

There are many occasions when you can wear a qipao in China, such as for a wedding, taking (family) photos, having a special dinner, and taking part in big events or parties. Sometimes you will see women wearing cheongsams together to celebrate birthdays or just for a get together.

Nowadays, qipaos have become daily clothes for many Chinese women.

Weddings: More and more young females in China wear a cheongsam during their wedding ceremony. Brides often prepare two cheongsams for a wedding. One is for the formal ceremony and the other for the banquet or tea ceremony.

Important events: You will often see actresses wearing cheongsams for public events or to present sport events. The models for auto shows and house shows often wear cheongsams too.

1. What is the difference between a cheongsam and a qipao?

In fact, cheongsam and qipao both refer to the same traditional Chinese dress, synonymously. They can be used interchangeably. The word cheongsam is Cantonese for ‘long shirt’. Qipao is Mandarin and means ‘banner robe’ or ‘Manchu robe’. Learn more

2. On what occasions can you wear a cheongsam?

You can wear a cheongsam both in formal situations and in daily life. But for most Chinese women, a qipao would only be worn on special days such as weddings, parties, events, or for taking photos. A wedding cheongsam is almost always red, because red means good luck in Chinese culture.

3. Who can wear a cheongsam?

In China, most women can wear a cheongsam, regardless their ages or social status. Nowadays. More and more young Chinese females wear cheongsams at formal occasions, such as weddings or parties.

4. What are the features of a cheongsam?

The main features of cheongsams are a Mandarin collar, traditional Chinese knotted buttons fastening the overlapping chest portion, two slits on both sides and a fitted waist. Cheongsams are made from cotton, silk, or brocade.