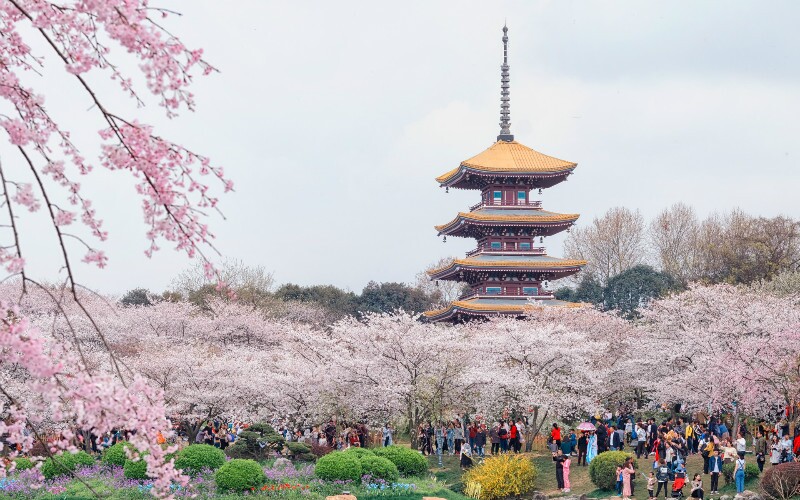 Wuhan is located in the middle of China, in a basin area. Its location, together with the North Asia tropic monsoon humidity, make it easy for hot air to collect and difficult to dissipate. Thus, Wuhan is known as one of the three stoves in China. During the summer, there are over 10 days when the temperature in Wuhan exceeds 40 °C (104 °F). The average annual temperature in Wuhan is 16.5 °C (61.7 °F), while the lowest average temperature appears in January and hits below 1 °C (33.8 °F). The highest average temperature usually occurs in July and August, and is over 28 °C (82.4 °F). Annual rainfall in Wuhan is 1100 mm (43.4 inches), and most of the rainy days are in the summer.

There are no clear boundaries between spring, summer, and autumn in Wuhan. Summer lasts for over 130 days, when the temperature exceeds 30 °C (86 °F) even in May, and then falls after September.

The best months to visit Wuhan are March, April, and October.

Spring in Wuhan begins in March. The temperature increases quickly to over 20 °C (68 °F). Spring is quite short in Wuhan, and it sometimes feels like summer during May. Take note that cold air occasionally hits Wuhan during March, when the temperature may decrease to between 15 °C (59 °F) and 20 °C (68 °F). Wearing long sleeves and jeans are fine, but a warm coat is also a necessity.

Summer has a long duration in Wuhan (from May to September). The highest temperature has been recorded at 44.5 °C (112.1 °F). Usually, the temperature hovers around 37 °C (98.6 °F) during the day and 28 °C (82.4 °F) at night. Summer nights are very hot and stuffy in Wuhan because the evaporation of water during the day creates high humidity at night, and sleeping is difficult without air conditioning.
Most rainfall occurs during the summer. Thunderstorms happen two to three times in Wuhan from June to August. Wearing T-shirts and short pants is suitable during summer, and sunglasses, sunscreen, and an umbrella are necessary.

Not unlike other cities in China, autumn in Wuhan can be very hot. The highest temperature gets to 38 °C (100.4 °F), even in September. The temperature cools down after September. The average temperature is around 20 °C (68 °F) - 25 °C (77 °F). Wearing long sleeves and jeans is fine but please also bring one or two T-shirts.