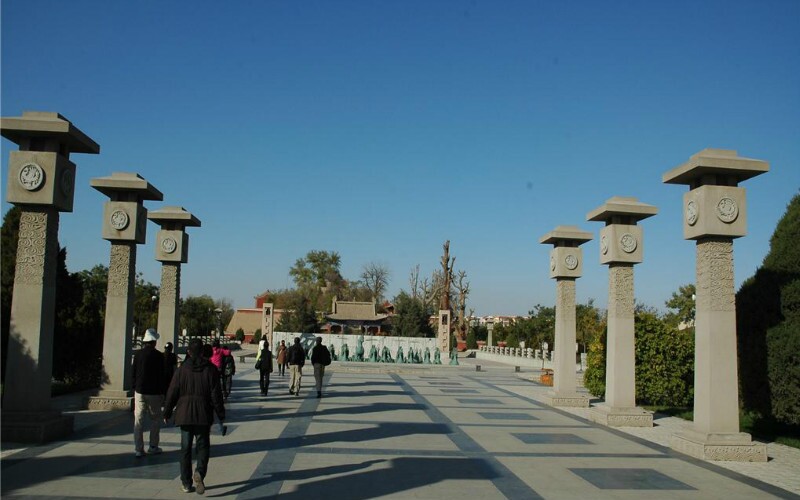 Wuwei Travel Guide - How to Plan a Trip to Wuwei Wuwei Region covers an area of 33,000 square kilometers and has a population of 195,0000, which is made up of 38 ethnic groups including Han, Zang, Hui and Mongolian minorities.

Wuwei, called Liangzhou in ancient times, was an important post on the ancient Silk Road. The prosperity of the Silk Road eventually brought Wuwei great business and wealth, so Weiwu was renamed "Place of Silver".

Wuwei is blessed with numerous cultural relics. The most famous attractions in and around Wuwei include Leitai Han Tombs, where the iconic Galloping Horse symbol was unearthed, Confucius Temple and West Park. Wuwei is also known for Haizang Temple, renowned as "Tiantianshan" Grottoes, which are the earliest grottoes found in China. Wuwei boasts a long history and a bright culture, which is considered as "a bright pearl"on the ancient Silk Road. As early as the Neolithic Age over 4,000 years ago, ancient people lived in the Wuwei Area. Over 2,100 years ago, Wuwei was controlled by the Xiongnu Nomadic Tribe, who built Zang Town, which was the original town at today's Wuwei City.

During the Three Kingdoms Period, Emperor Wendi of the Wei State established Liang Prefecture, which means Cold Prefecture. It was so named because the region was cold all year round. Liang Prefecture for the first time became one of the thirteen prefectures of the country, after which Wuwei gained its prominent role in Chinese history.

During the East Jin and Sixteen Kingdoms Period, the country split into many different states, with the East Jin controlling much of the south and sixteen different states ruling in the north. Former Liang, Later Liang, South Liang and North Liang set up their capitals in Wuwei successively. At the end of the Sui Dynasty and the beginning of the Tang Dynasty, Ligui controlled Wuwei and set up the Great Liang Kingdom. Its role as capital for five successive states brought Wuwei more fame and significance.

Restaurants are scattered all around the city, and at night food stalls in the streets are set up selling snacks.

Wuwei Bus Station at West Nanguan Road is the largest bus station on the highway from Central China to the Hexi Corridor. There are buses from and to Lanzhou, Xining, Urumqi, Dunhuang and Yinchuan. Public buses 3, 4 and 6 run between the bus station and the rest of the city.

There are two railway stations in Wuwei: South Railway Station and Wuwei Station. South Wuwei Railway Station, located at Wunan Town, 13 kilometers to the southwest of the city, is larger and of more use to travelers. It is the largest railway station in the region west of Lanzhou, and an important conjunction of railways including the route from Lanzhou to Urumqi in Xinjiang Province, and the Wuwei-Zhongwei Railway. From Wuwei, there are trains heading to Lanzhou, Yinchuan, Urumqi, Beijing and Shanghai.

Wuwei, located between the Tengger Desert and Badain Jaran Desert, has a temperate continental climate. The terrain of Wuwei falls into three geographically distinguished parts: desert in the north, plains in the center and mountains in the south. Climate in the north is arid, characterized by little rain, heavy winds and storms all year round. The plains in the center have relatively comfortable weather. It is therefore the crop and fruit production base of the province. The mountainous region in the south, where the Qilian Mountains are located, is humid due to its dense forests.

The annual average temperature in Wuwei is around 8 °C (46 °F), and the average rainfall ranges from 60 to 610 millimeters.

The best times to visit Wuwei are summer and autumn. Compared with areas in East China, Wuwei is very dry all year round. Summer and autumn are the best seasons for visitors who are not used to the arid weather as most of the rainfall comes during this period.