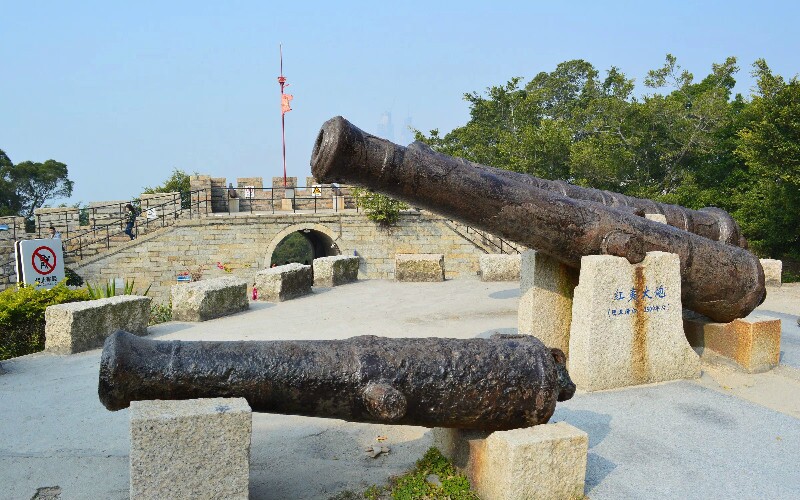 Hulishan Fortress is a key national historical and cultural site. One of the fortress's cannons was listed in the Guinness World Records. It's on the south of Xiamen Island at the top of Huli Hill, overlooking the sea. This fortress was built to protect the island from invasion. The fortress and artillery will be particularly interesting to history buffs. The views may be beautiful, but cannons are the biggest highlights of Hulishan Fortress. The fortress displays more than 50 iron cannons from the Ming (1368–1644) and Qing (1644–1911) dynasties. Two of the cannons were purchased from the Krupp Company in Germany. Only one of them remains at the fortress.

The 280 mm Krupp Cannon is well preserved. Its estimate range is up to 16 km (10 mi). It was recorded by the Guiness Book of Records as the world's oldest and largest coastal artillery of the 19th century in August 2000. The rectangular fort, made of granite rocks, occupies 13,000 square meters. The base of the fortress is made of a mixture of camphor tree sap, liquid brown sugar, glutinous rice, clay, and sand, making it rather solid!

It is composed of a barracks, a secret tunnel, a commanding tower, a sentry platform, an ammunition depot, a trench, a castle, and other structures. The east and west emplacements are connected by a tunnel. Hulishan Fortress has a trench outside and a patrolling path inside.

One of your rewards when you reach the top of the fortress is a stunning view of Xiamen and the outlying Dadan and Erdan islands. Telescopes have been installed in order for people to get a better look at the beautiful scenery.

Every day at 8:30am, an armed guard in traditional uniforms opens the gate and welcome visitors. This performance shows military training from the Ming and Qing dynasties. Actors dressed in “plain red” and “yellow banner” suits use historical military equipment and perform drill and shooting to music. This 16-minute performance is at 10am and 4pm every day.

After the performance you can take photos with the actors for free. Actors dressed in authentic military garb wander throughout the fortress all day.

You can see cannons, guns, swords, and unusual natural stones at this museum. The exhibitions include the world's smallest cannon, made by a Portuguese in the 13th century. Its length is only 11 cm (4 in) and weighs only of 0.22 kg (0.5 lb). Xiamen was a historic battlefield, and the fort played an important role in resisting foreign aggressors.

In 1986, the Platforms of Yearning for Return were built toward the front of the fortress. Through telescopes you can see Dadan and Erdan islands, which are under Jinmen (Taiwan) jurisdiction.

Best times: visitable all year round; summer is hot and wet, and fall generally offers the best views If you are planning a tour of Hulishan Fortress, please see our popular Fujian tours below for inspiration:

Our tours can be tailor-made. Just tell us your interests and requirements, and we will create a perfect Xiamen tour for you.

There are plenty of nearby attractions in Xiamen city to enjoy while you're in the area.

xiamen How to Plan a 5-Day Xiamen Tour

xiamen 10 Top Things to Do in Xiamen