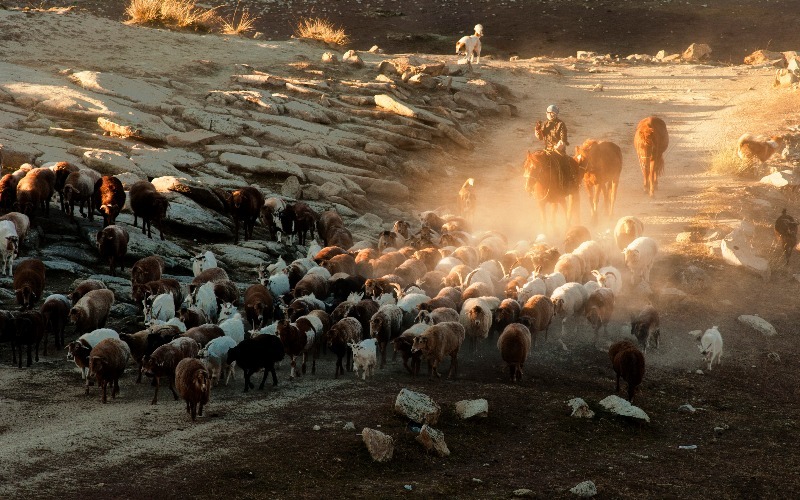 The world’s most landlocked region, Xinjiang, has a climate that is characterized by low rainfall, large temperature differences between day and night, and long hours of sunshine (averaging 7–8 hours/day).

Due to Xinjiang’s large area, the weather varies between different cities and prefectures. With the Tianshan (‘Heavenly Mountains’) range as the boundary, the difference between southern and northern Xinjiang is obvious.

The best times to visit Xinjiang are from June to October when the flowers are in blossom, grasslands grow luxuriantly, and melons and grapes are ripe for tasting.

Xinjiang has a lot to do all year around: appreciating flowers in spring, summer resorts, enjoying fruits in autumn, and skiing in winter.

If you want to see the scenery, you can visit Northern Xinjiang. Ili has large lavender flower seas that are at their best in mid-June. July and August are the best times to visit grasslands and lakes: Nalati Grassland, Bayanbulak Grassland, Sayram Lake… Autumn scenery in Kanas is the most beautiful.

Compared with the beautiful northern Xinjiang, southern Xinjiang is more of a historical and cultural landscape, such as the relics of the Silk Road, which are less weather-dependent.

Here are average monthly temperature ranges for the major tourist cities of Xinjiang.

Spring in Xinjiang (March to May)

In spring, the solar radiation and the temperature of the desert increases rapidly in southern areas such as Turpan, Kashgar, and Hetian where there are strong winds, sandstorms, and dusty weather.

Clothing: The temperature difference between day and night averages 12°C (53°F), so bring a jacket or coat.

Northern Xinjiang’s spring comes late, in April, while southern Xinjiang is already blooming at that time and is already above freezing in March. Warmer places, such as Kashgar and Turpan, are recommended.

Also in the south, appreciate the vast grandeur of the Pamirs and Kunlun Mountains, and the desert scenery in Kuqa and Korla.

In April, apricot blossoms are luxuriant in Yili’s Xinghua Valley.

Xinjiang in Summer (June to August)

Summer in Xinjiang is the peak season for tourism. The average temperature in July is 20–30°C (28–86°F) in northern Xinjiang, which is comfortable.

The temperature decreases from the southern deserts to the mountains. When the sun is scorching in the desert basins, such as Turpan, where it can get to over 40°C (104°F), the temperature in the mountainous area is about 15–27°C (59–80°F).

Clothing: Although it is hot during the day, it is cool and breezy in the evening. Bring light and breathable shirts and other sun-proof clothing, and warm clothes if visiting mountainous areas.

In Xinjiang, summer is the time to enjoy the scenery and avoid the heat. The grasslands in Ili are lush and green. Nalati Grassland, Bayanbulak Grassland and Tangbula Grassland are all beautiful.

Ili River Valley in June is full of seas of lavender.

Heavenly Lake in Urumqi and Karakuli Lake in Kashgar are both stunning against the clear sky. The vines are loaded with fresh grapes in Turpan Grape Valley in August.

Contact us to create a trip to Xinjiang. We will make a trave plan according to your group size, time, budget, interests, and other requirements.

Xinjiang in Autumn (September to October)

The cool and clear weather makes autumn a comfortable season for tourism.

Clothing: Bring t-shirts and light jackets for September; thicker sweaters and jackets are needed in October.

Autumn in Xinjiang is short, but there is a lot to do. September is still a season for enjoying all kinds of fruits in places like Turpan Grape Valley: grapes, Hami melons, apples, yellow peaches, figs, pomegranates…

Kanas has the most beautiful scenery in autumn. The lake is surrounded with dense alpine forests of spruce, birch, elm, and Siberian larch. Cabins are scattered among a sea of golden birches. The forests provide a vivid backdrop of colors, an unspoiled dazzlingly beauty. Autumn is also a season to have the experience of picking cotton in Kanas.

Xinjiang in Winter (November to February)

Xinjiang experiences snow in winter: from very small amounts in the desert to significant amounts in the mountains. The number of snow days in Northern Xinjiang is generally 25–45, falling as early as October and as late as March.

A temperature inversion phenomenon occurs in the mountainous areas of Altay, Yili, and Urumqi, which makes them warmer than you’d expect and an ideal place for ice and snow activities. The quality of ice and snow is good and there is usually no wind and bright sunshine.

Altay, the northernmost part of Xinjiang, has a long, cold winters, and heavy snowfalls. The Altay Declaration released in 2006 officially recognized Altay as the world's birthplace of skiing with a history of 10,000 years.

Kanas has beautiful snow scenery. There is glittering rime hanging on the groves of birch trees, snow-covered glacial lakes, endless snowy vistas, and cabins deep in the snowy forests.

Tour Xinjiang with Us

All our tours are customizable. See our recommended Xinjiang tours for inspiration: