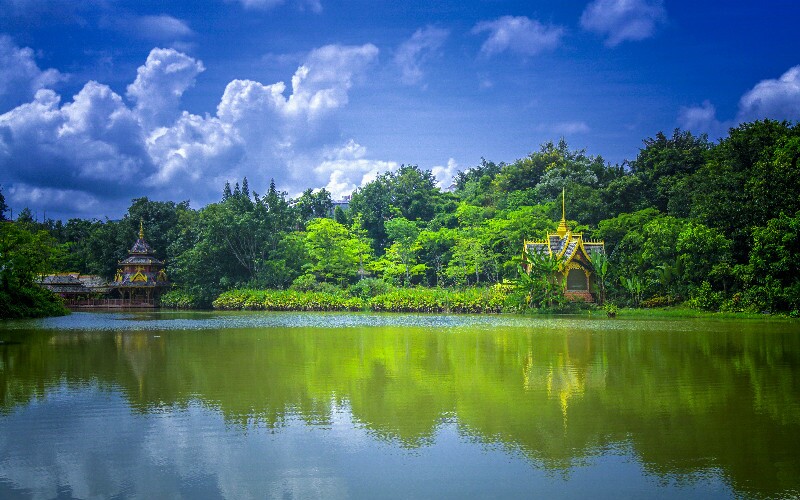 Manting Park in Xishuangbanna used to be the Imperial Garden of the Dai Kingdom, with a Buddhist temple called Zongfo Si inside. The Dai cultural show and bonfire party happen there every evening.

Manting Park, a natural village-style park, is 2 kilometers (1.2 miles) southeast of downtown Jinghong, the major city of Xishuangbanna in Yunnan Province. The park has over 500 well-preserved ancient kassod trees and other plant species, hills, rivers, and local Dai architectures and temples, presenting a collection of tropical nature and the culture of the Dai royal family, Buddhism, and Dai folk customs.

Scroll down to find key travel info, its legend, and things to do in the park, or contact our Xishuangbanna expert for more information. 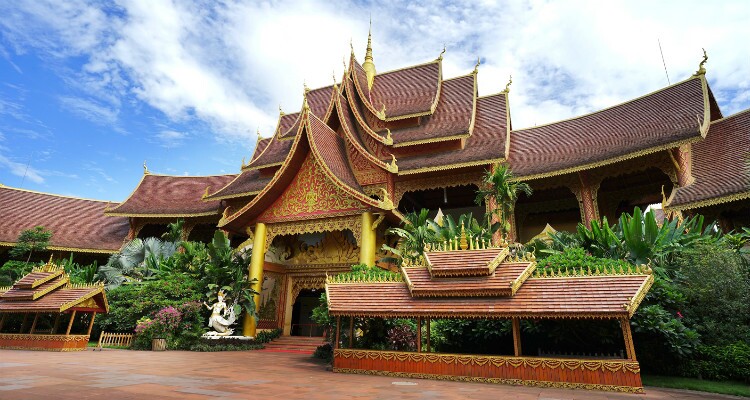 The Legend of Manting Park

According to legend, around 1,300 years ago, the king of the Dai kingdom went out hunting and met a lady on the way. The two fell in love at first sight and got married. To commemorate their true love, the king built an imperial garden for his new queen with exotic flowers and plants at the place where they met.

The queen came to the imperial garden for a visit and was deeply impressed by its beauty. However, after returning to the palace, she was inexplicably ill. The king was so anxious that he invited a famous wizard to divine a cure for the queen. It turned out that the queen was actually not sick, but was so fascinated by the scenery of the imperial garden that her soul was left behind in the garden. As soon as the queen returned to the park, she recovered immediately. And so the garden got the name of Chunhuan, meaning ‘garden of the soul’ in Dai.

Local people heard about this place and moved to live around it, and gradually formed the areas trinity of villages, parks, and temples.

Curious about why the queen of Dai lost her soul in the park? Take our 6-Day Xishuangbanna and Pu'er Tour and see its beauty for yourself. 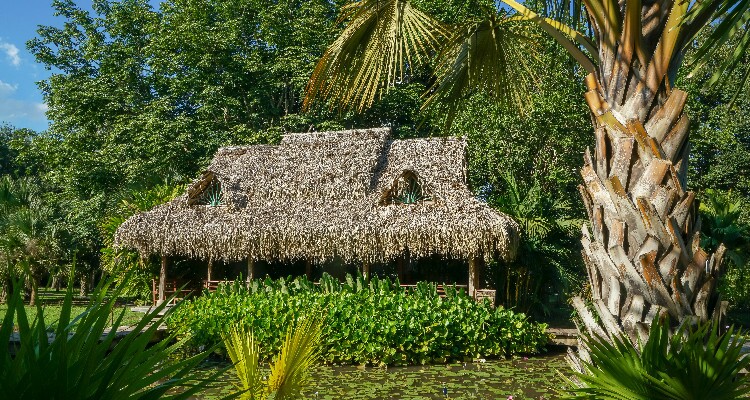 The best time to visit Manting Park is during the dry season, from October to April.

The park opens two times a day with separate tickets. A daytime ticket is valid from 8:00am to 5:30pm; and from 6:30pm visitors can re-enter the park to join in the night activities. For those who wish to enjoy the culture show and bonfire party at night and visit the park’s other attractions, it’s best to go in the late afternoon.

Manting Park is one of the venues for Xishuangbanna’s annual Water Splashing Festival from April 13 to 15 each year. Feel free to contact us to join in this big event if you are interested. 4 Things to Do in Manting Park

The park can be roughly divided into 5 zones: ethnic cultural area, imperial garden area (gardens of orchid, lotus and leaves), release lake area, Buddhist culture, and performance venue, etc. China Highlights has carefully selected the following activities to meet the different interests. And you can also contact us for more recommended attractions inside the park.

1. Revel in Nature in the Imperial Garden

Countless tropical plants and flowers are planted there, with majestic royal architecture of palaces, pavilions, pagodas, and bridges in the Dai style.

The Garden of Orchids is the place where the queen's soul was left behind, according to the legend. Hundreds of rare tropical orchids are planted there, including the four orchids of the highest ornamental value: the noble dendrobium, Cattleya orchids, moth orchids, and Vanda orchids. The lotus pond shows its beauty every year from June to September.

Walking inside the garden area, take a deep breath and get lost in the natural oxygen bar. 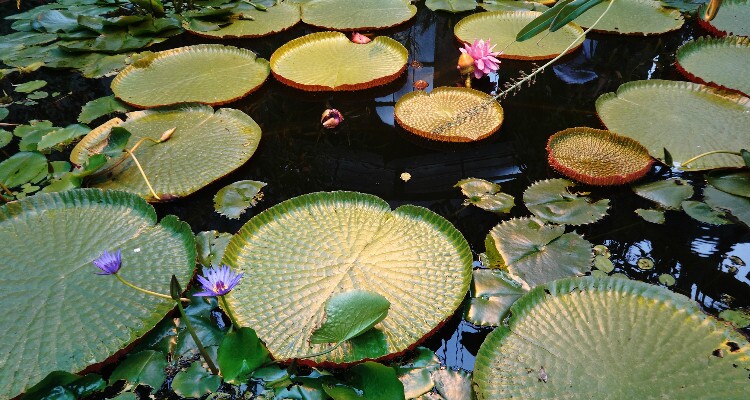 2. “Release Your Life” at Release Lake

Release Lake is the place where Buddhist believers in Xishuangbanna “release their lives”. It is one of the most famous lakes in Southeast Asia. According to the Bayeux Sutra, during Songkran (the Water-Splashing Festiavl) and other Buddhist festivals, the men, women, and children of Dai families bathe and change into clean clothes, go and visit Manting Park to worship the Buddha, pray for blessings, and “release their lives” at the lake, i.e. they make a wish.

You can also take a boat ride on the lake if time allows. 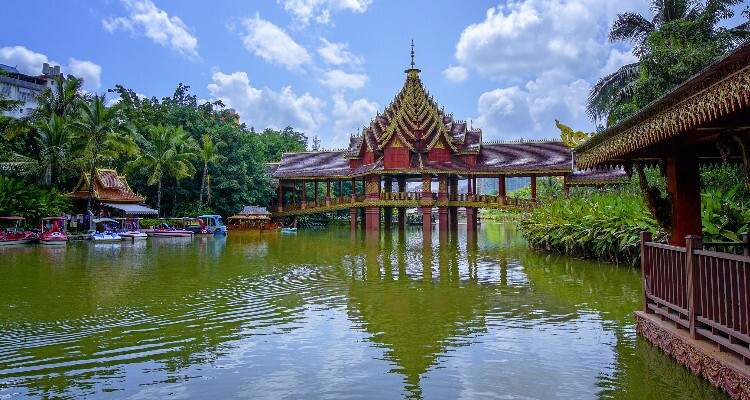 Zongfo Si or ‘Comprehensive Buddhist Temple’, is of the highest level among all the temples in the Xishuangbanna area.

It has experienced many catastrophes and has been rebuilt five times. Zongfo Si has taken on a new and resplendent look after several twists and turns. It is one of the best places for locals to take Southeast-Asia-style pictures, and feel like they’re traveling in other countries further south. 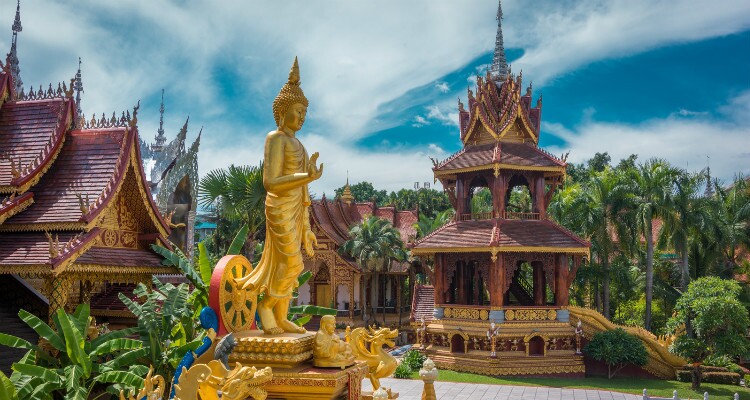 Unlike a daytime visit, an evening in Manting Park brings you into a more vivid cultural world. You will need to buy another ticket, costing from CN¥280 for an enjoyable night in the park. The schedule is as follows:

7:00–7:30pm: a buffet dinner with mainly Chinese cuisine in a large restaurant

9:10–9:40pm: Take part in the romantic candlelight procession. Put floating candles on the lake behind the theatre and make a wish. Then, it is time for the Bonfire party and enjoying yourself!!! 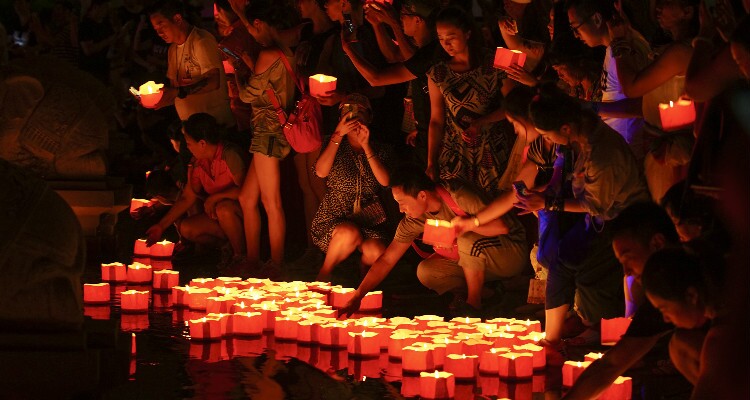 English is not commonly used in Xishuangbanna, but China Highlights can help you customize a tour to visit Manting Park and other highlights in Banna that gets over any language barriers.

Here is a sample tour plan for inspiration: