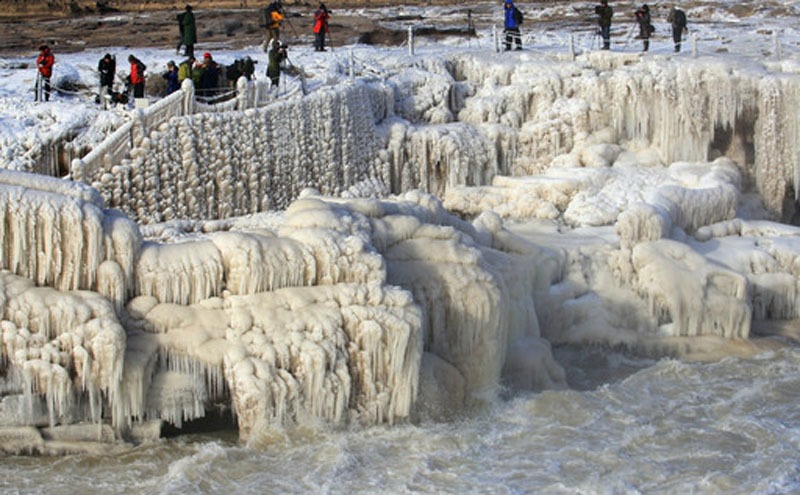 Yan'an Travel Guide - How to Plan a Trip to Yan'an

Yan'an is located in the north of Central China's Shaanxi Province, about 300 kilometers from Xi'an, the capital city of Shaanxi Province. It is on the middle reaches of the famous Yellow River, considered as the birthplace of Chinese civilization. As a legend goes, Chinese ancestor the Yellow Emperor had even lived here. It is renowned for "Three Yellows and one Holy Land", defined as the Yellow Emperor Mausoleum, Hukou Waterfall on the Yellow River, the Loess Plateau (which is yellow) and the Holy Land of the Chinese Communist Revolution Movement.

Yan'an is one of the 24 famous historic cities of China. Besides the Yellow Emperor's Mausoleum, there are over 800 historical and cultural relics, including ancient towers built in the Tang Dynasty (618-907), the stone carving clusters and temples of the Song Dynasty (960-1234). Yan'an also has abundant natural resources: the most famous waterfall on the Yellow River, Hukou Waterfall and the largest wild peony habitat in China, Wanhua Mountain.

Yan'an is the endpoint of the Long March (a massive military retreat undertaken by the Red Army of the Chinese Communist Party, the forerunner of the People's Liberation Army, to evade the pursuit of the Kuomintang army). Yan'an is regarded as the Holy Land of the Chinese Communist Revolution Movement for it being the center of the movement from 1937 to 1948. The city has as many as 140 revolutionary sites, including Wangjiaping Revolution Site, Yangjialing Site (Site of the Former Offices of the CCP Central Committee), Date Garden (site of the CCP Secretariat), Baota Hill (Pagoda Hill) and Nanniwan Revolution Site.

People, who are interested in Chinese modern revolutionary history and those who want to experience the folk customs and culture of the Loess Plateau, should never miss visiting Yan'an. China Highlights offers customized tours to Yanan.

As a northern city of Shaanxi province, Yan'an is on the middle reaches of the Yellow River. It is next to the Shanxi Province in the east and Gansu Province in the west with the meridian line as the boundary. Yan'an is in the hinterland of the Loess Plateau with the altitude of 800-1800 meters (2600-5900 feet).

Yan'an is a historic city. During the ancient Xia period, it was a place of Yong zhou (zhou is an administrative division in former times) it belonged to the successive ancient countries like Bai di, Jin, Wei, Qin and later the Shang jun state on Qin.

Yan'an began to work as a prefecture in the Sui Dynasty (581- 618) and then was called Yan Zhou or Yan'an Fu. (Fu is the seat of government during the Tang and the Song Dynasty). As a place where the Han people communicated well with the northern minorities, Yan'an had already been the center of politics, military, economy and culture of the northern Shaanxi area.

It was the site of Central Committee of the Communist Party of China during Oct, 1935 to Mar, 1947. It was the military headquarters where Mao Zedong led the Chinese people to success in the War of Resistance Against Japanese Aggression and the Liberation Revolution of China. What's more, the Yan'an Spirit which advocated the spirit of liberation, hard working and living on yourself during hard times came into being and affects much on China's future.

Yaodongs is artificial caves or dugouts carved into hillsides which are traditional dwellings in Shaanxi Province. The most famous Yaodongs are the military headquarters where the early leaders of Chinese Communist Party such as Mao Zedong lived and commanded Chinese revolution.

Yaodong is warm in winters and cool in summers. Consequently, very little heating is required in winter, and in summer, it is as cool as an air-conditioned room. Yaodong is an artificial cave with a rectangle in the lower part connected to a semicircle in the upper part. It is usually 3.5 meters (11 feet) wide, 3 to 4 meters (10 to 13 feet) high and 5 to 9 meters (16 to 30 feet) deep. Windows and doors are installed at the opening of the Yaodong. The inner side wall is usually plastered with lime to make it white. There are mainly two kinds of Yaodongs: loess hill Yaodong and stone-built Yaodong. Most Yaodongs are carved out of a generally vertical side of a loess hill. They are the most and striking architectures seen at the famous revolution sites such as Wangjiaping Site, Yangjialing Site (Site of the Former Offices of the CCP Central Committee), Date Garden (site of the CCP Secretariat), Pagoda Hill and Nanniwan Revolution Site.

Yaodong is the living evidence of Chinese modern revolution and Yan'an Spirit (the spirit of liberation, hard working and living on yourself during hard times).

Yan'an is located at the center of the Loess Plateau which has been called the "most highly erodible soil on earth". It is yellow and rugged for miles, which is a vision strike.

More and more trees and green vegetation are planed on the plateau since a project armed to mitigate desertification launched in 1994. They add much vitality to the boundless yellow Loess Plateau.

Waist Drum Dance is a kind of folk dance which is originated from North Shaanxi Province and then gradually become prevalent in many places of China. A dancer tied a red drum to his waist, beating the drum while dancing with two drumsticks decorated with red silk belts (sometimes colorful silk belts).

Ansai (a county of Yan'an) Waist Drum Dance, with a history of over 2000 years, has distinctive features. It is usually in the form of group dance. The number of the dancers varies from ten to several hundreds even thousands. Ansai dance includes vigorous movements accompanied by rhythmic drumbeats. At the climax of the dance, dancers beat drums while jumping into the air, uttering the sound "Haihai" excitedly. The rhythmical drum sound and graceful dance show the straightforward and uninhibited character of villagers in North Shaanxi Province and is an expression of their happy and passionate feelings. China Highlights offers customized tours to Yanan, just fill out this form and we will response within 24 hours, free inquiry.

Yan'an is a good place to escape summer heat. It is much cooler than other place of Shaanxi Province. While there is sharp temperature difference between day and night, therefore warm clothes are recommended. As Yan'an is located on the Loess Plateau, wind-blown sand in air is prevalent. You can bring a pair of glasses, a hat and a muffler for comfort. There are usually many tourists festivals featuring folk customs (such as waist drum dance and Yangge Dance) held during the period around Chinese New Year (usually from late January to early February). It is the best time to enjoy the colorful folk customs of the Loess Plateau.

The Best Times to Go

July, August, September and the period around Chinese New Year