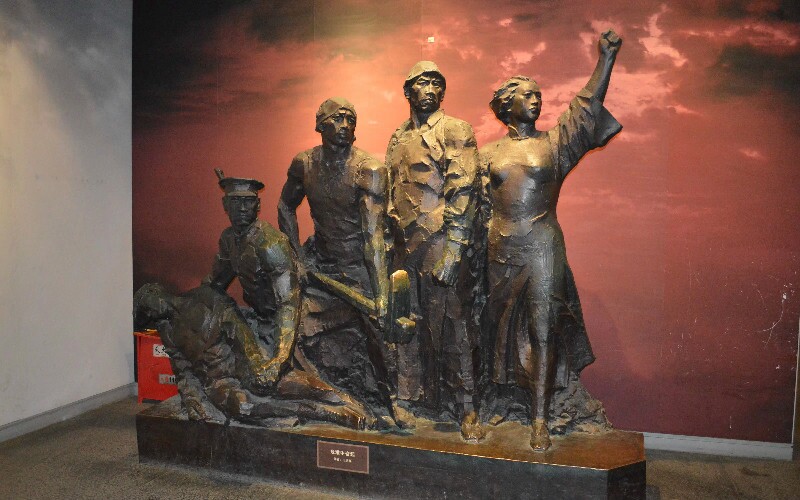 "Red tourism" is related to historical sites and places which record China’s revolution led by the Communist Party of China from 1921 to 1949. Because both China’s five stars flag and the Communist flag are red, the Chinese named these historical sites red scenic spots. In China, the red tourism are especially popular around Party’s Day (1st July, the anniversary of the beginning of Communist Party of China).

Here China Highlights would like to introduce you to China’s five most popular red tourist destinations, where you can visit red historical sites as well as other China highlights. If you are interested in them and plan to have a visit, you can consult us for details for free, and have us tailor-make a tour of China for you to include your favorite China highlights.

Yan’an is the holy land of China’s Communist Party revolution. It was Mao Zedong’s revolutionary base area when the Red Army arrived there at the end of 1935 after the grueling Long March. Many of the historical sites there are caves hollowed out from the local loess plateau.

Yan’an has about 140 revolutionary sites, including Wangjiaping Revolutionary Museum (the site of Central Military Commission and head office of the Eighth Route Army during it's Yan’an occupation, which lasted from October 19, 1935 to March 23, 1948), Fenghuang Mountain (the site of the Central Committee of the Communist Party of China), Baota Hill, and Yangjia Ling Revolutionary Site.

Yan’an, located in northern Shaanxi Province, was a strategic location in Chinese of warfare since ancient times. It is also associated with the legendary beginnings of Chinese civilization. The Yellow Emperor (Huangdi) Mausoleum Scenic Area was the place for the state sacrificial ceremonies from 770 (in the Tang Dynasty). Hukou Waterfall, a magnificent wonder of the Yellow River, is only about a 3-hour drive from Yan’an City.

2. Shaoshan: the Hometown of Mao Zedong

Shaoshan is the hometown of Mao Zedong. Mao’s legend has boosted Shaoshan’s tourism. There are seven tourist areas with 82 tourist spots. The top sights are Mao’s Residence, the Mao's Memorial Hall of Mao, bronze statues of Mao, the Exhibition Hall of Mao’s Relics, stone tablets of Mao’s poems, and the Mao Memorial Garden.

Smoked meat (pork, mutton, beef, duck, chicken, or rabbit) is the most famous special local product of Shaoshan. Almost every local restaurant there services a dish made with smoked meat, and Mao’s favorite dish: braised pork in brown sauce. Shaoshan people are keen on spicy food, so you may want to request less or no chilies.

Shaoshan is in Hunan Province, not far from Changsha, Zhangjiajie, Fenghuang Ancient Town, and Guilin. You could combine these popular tourist destinations within a visit to Shaoshan.

The Pavilion of Prince Teng

Nanchang is the capital city of Jiangxi Province. It is regarded as a hero city in China, because Nanchang was the site of a significant uprising: the August 1 Nanchang Uprising of 1927, which was led by Zhou Enlai and He Long (China’s supreme commander).

This uprising is the origin of China’s Army Day (August 1, anniversary of the founding of the Chinese People's Liberation Army), comme the first counterattack by the Communist party against a campaign by the Nationalist government to wipe out the party.

Another Nanchang highlight is the Pavilion of Prince Teng (滕王阁), which is one of the most famous three-storied buildings in regions south of the Yangtze River (the other two are Yellow Crane Tower in Wuhan City, and Yueyang Tower in Yueyang City).

Jinggang Mountain is located near Ji’an City, Jiangxi Province (江西省吉安市), and it is famous for its profound red culture. There are 29 red historical sites, including the former residence of Mao Zedong, the first hospital of China’s Red Army, a revolution museum, and a battle site. It is a picturesque area, a place with towering mountains, graceful waterfalls, verdant trees, and spectacular seas of clouds.

The revolution led by the Communist Party of China began at Jinggang Mountain in October 1927 (after the unsuccessful Autumn Harvest Uprising in Changsha). The communists were based there until to February 1930. It was there that the Red Army was founded.

Zunyi is a city in Guizhou Province, which is famous for its ethnic minorities’ cultures. There are tens of red scenic spots in this city, and the most famous one is the site of Zunyi Conference. Zunyi Conference was held in 1935, during the Long March (lasting from October 1934 to October 1936). It was on this conference that Mao Zedong was elected as the leader of the Communist Party of China for the first time.

Located at 96 Ziyin Road (子尹路96号, Ziyin Road is also named Hongjun Road, literally meaning Red Army Road), the two-floor building was the general headquarters of China’s Red Army at that time. Visitors can retrace the offices and living rooms of several leaders at that time, including Zhou Enlai, and Zhu De. There is an exhibition hall at the site, where visitors can see the weaponry and articles used by China’s Red Army, and some sculptures related to China’s revolution.

Zunyi’s Chishui Danxia Landform is one of the World Natural Heritage sites in China. There visitors can appreciate the largest Danxia landscape in China. Zunyi is about 343 kilometers from Kaili, a place regarded as the cultural hub of China Miao and Dong ethnic minorities. Check out Zunyi’s attractions and Kaili’s attractions.