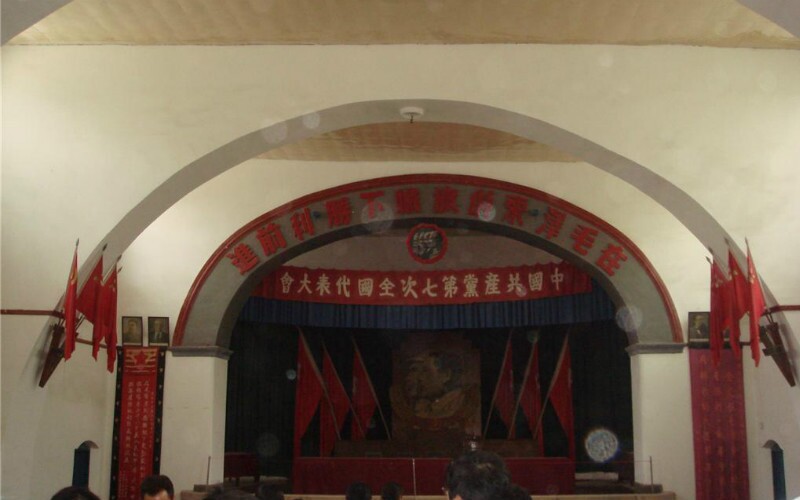 Yangjialing Revolutionary Site is the former office of the CCP (Chinese Communist Party) Central Committee. It is located at Yangjialing Village, two kilometers (one mile) northwest from Yan'an City. It was renovated during 1953 and has opened to public since 1959. Visitors can view the Great Auditorium, the Office Building and a raw of Yaodongs (artificial caves or dugouts carved into hillsides) which were the residences of Chairman Mao, Premier Zhou Enlai and some other Chinese Communist Party's early leaders, as well as many relics of much historical importance.

It severed as the headquarters of China's Communist Party from November 1938 to March 1947. During this period, Chinese Communist Party Central Committee leaders commanded the Anti-Japanese War and launched the well-known Rectification Movement and the Large Scale Production Campaign. The Great Auditorium was built in 1942 and later the Seventh National Congress of CCP was convened here in April 1945 which was one of the most defining moments during China's long history and of great affect on China's future. Mao Zedong was elected to be the chairman of Chinese Communist Party Central Committee at the congress. He composed and published many famous articles which were of great significance on the development of Chinese Communist Party, the Chinese Revolutionary Movement and China's future.

Chairman Mao, Premier Zhou Enlai and some other Chinese Communist party's early leaders lived at Yangjialing from November 1938 to March 1947. Yangjialing is the residence where they stayed for the longest time in Yan'an. There were a lot of memorable occasions happened during this period. Chairman Mao and his wife Jiangqing and other Chinese Communist Party early leaders held a wedding for Deng Xiaopinng (prominent Chinese politician, statesman, theorist, diplomat and the reformer who led China towards a market economy) and Zuolin in the front of the raw of Yaodongs in September 1939. Chairman Mao was interviewed by American journalist Anna Louis Strang in August 1946, at the stone table in the front of the Yaodong he lived. After that the famous phrase "Paper Tiger" became world-famous.

Many people visit here to commemorate the defining moments of the Chinese Revolutionary Movement and learn something from the Yan'an Spirit (the spirit of liberation, hard working and living on yourself during hard times).