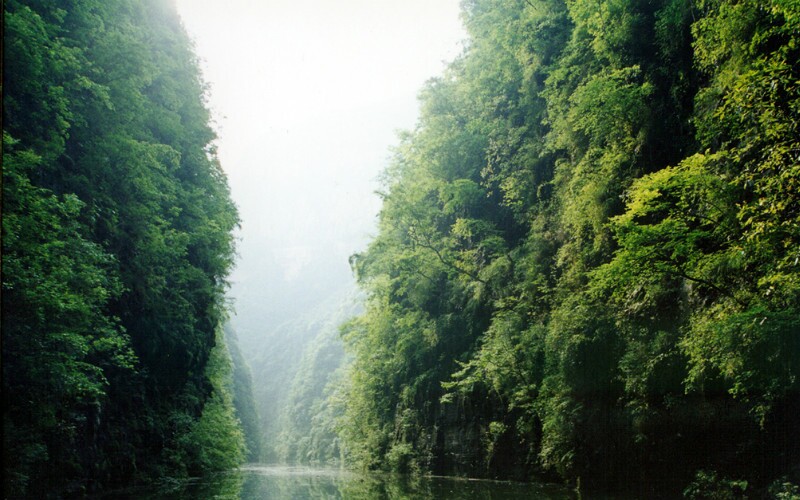 Sanyou Cave that is in the sheer cliff at the northern side of Xiling Gorge that is about 10 kilometers or about 6 miles away from Yichang City offers possibly the best cave scenery in the Three Gorges area. For centuries since the Tang Dynasty, poets have come here to see the scenery and leave poetic inscriptions.

Through natural erosion and human destruction, a lot the the inscriptions in the cave and around it have been destroyed. But it is still a highlight to see in the Three Gorges area for the scenery and the ancient inscriptions that are still left. Highlights at the sight are seeing the cave itself, seeing the scenery, walking up the path from the cave to the Zhixin Pavilion, and the ancient inscriptions.China Highlights is your China travel expert( see why choose China Highlights). We can help you customize a trip to visit Sanyou Cave and other attractions in the Yangtze Gorges area.

Sanyou Cave (三游洞) means "Cave of the Three Travelers," and the cave was so named because three Tang Dynasty (618-907) poets and officials named Baijuyi, Baixingjian and Yuanzhen are believed to have visited it. Not only they, but many other poets and famous people came to the cave and left inscriptions. The cave is about 30 meters long, 23 meters wide and 9 meters high. It was formed by natural erosion, and stalagmites separate the cave into two chambers. The bigger chamber in front is where there are 40 inscriptions remaining. Ou Yangxiu who was a great Song era (960-1279) literati left an inscription there.

On the flat rock faces are inscriptions left by some of the numerous ancient visitors over a long period of time. The themes of the inscriptions are much pretty the same. They praise the fantastic cave scenery. The form of the inscriptions vary. This is a result of the changes in Chinese language during the various eras and the differences in individual styles. You can see examples of various styles such as Chinese regular script, clerical script, seal characters, running script, and cursive hand.

A small path leads from the cave entrance up to the Zhixin Pavilion. There travelers can gain view of the majestic scenery of the mighty Yangtze River twisting among the mountains.

Century Cruise Deals for Europeans, Save Up to $109