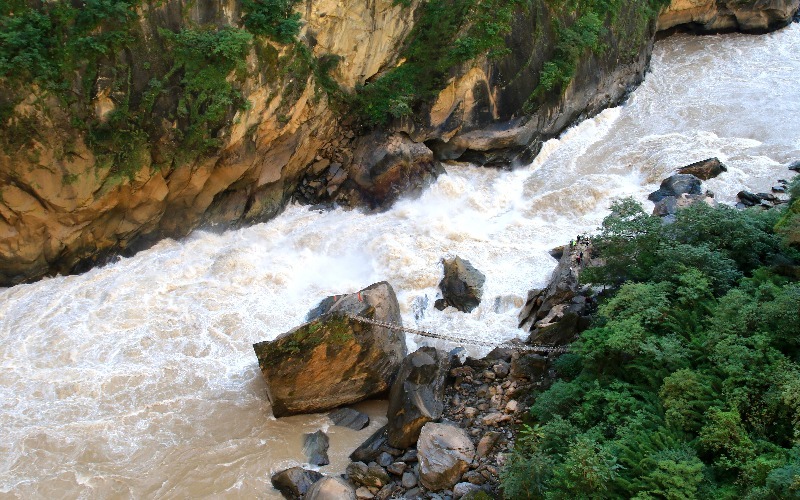 Among the highlights of Yunnan, Tiger Leaping Gorge is a must for hiking and magnificent landscapes. Part of a UNESCO World Heritage Site, it is particularly outstanding for its geomorphology, but it also has an ethnic cultural heritage and diverse flora and fauna.

Read our selection of 10 fun facts about Tiger Leaping Gorge for the basics, like its length and depth, but moreover, you can get something interesting to share with your kids or friends. For example, there are no tigers in Tiger Leaping Gorge.

1. Tiger Leaping Gorge Is in Shangri-La, NOT Lijiang!

TLG is also well-known as a great trek. Travelers regularly trek the trails winding along Haba Snow Mountain over 2 days. Hiking along the trails, you can see the cascading Jinsha River, admire the precipitous gorge scenery, and chat with local Naxi people.

3. Tiger Leaping Gorge Is Twice the Depth of the Grand Canyon.

The deepest point of the Gorge is Mantianxing (‘Sky Full of Stars’). Mantianxing gets its name as the rocks in the rapids are like stars twinkling in the sky. Tiger Leaping Rock is the most famous of the “stars”.

4. Tiger Leaping Gorge Would Fill West Lake in Only Half an Hour!

Tiger Leaping Gorge is regarded as the most dangerous section of the Yangtze River. Its average flow rate can reach 7,800 m3/s (3 Olympic swimming pools per second!). With that rate of flow, the river waters would fill West Lake (capacity 14,000,000 m3) in half an hour.

West Lake stretches over 6.5 square kilometers (2½ square miles), making it the largest landscape garden water feature in China. It is an iconic, symbolic sight in Hangzhou. Impression West Lake is performed and entirely staged on the Lake.

5. Bullet Trains to Tiger Leaping Gorge Are Expected in 2022!

6. Any Tigers in Tiger Leaping Gorge? No!

In Yunnan, tigers only now live wild in Xishuangbanna, on the southern border of China and Myanmar/Laos. So, there are no tigers in Tiger Leaping Gorge.

Tiger Leaping Gorge gets its name from a legend. It tells of a tiger who crossed the fierce river by leaping on a rock mid-river to escape from its hunter — a 25-meter (82-foot) jump! A life-size tiger statue in the Gorge is one of its landmarks.

7. Tiger Leaping Gorge Can Be Crossed in 135 Steps!

As per the legend, the hunted tiger only needed a flying leap or two to cross the Gorge. How about humans?

A Chinese, Zhang Liang, tested and verified that people can walk across the Gorge with 135 steps in 6 minutes. He balanced on a slackline over the roaring river of Tiger Leaping Gorge. He crossed with nothing but a small rope attached between his waist and the slackline to stop him from falling into the river.

Scientists studying the sediments, fossils, and glacial evidence in Tiger Leaping Gorge have calculated that the Gorge was formed about a million years ago.

Cave drawings have been found in caves along the Gorge, as well as some implements and artifacts. They show that cavemen once lived in this area.

9. Tiger Leaping Gorge Has Only Been Conquered by Raft Once!

In the early 1980s, rafting down the Yangtze River was a crazy dream for young Chinese adventurers. It was considered an act of patriotism at that time. But Tiger Leaping Gorge was thought to be an unnavigable part of the Yangtze River, due to its raging torrents and savage reefs.

With extreme patriotism, some even attempted to go down the Gorge with poor equipment and without any rafting experience. Without a doubt, they were never seen again. In 1986, the Yangtze Expedition team successfully navigated through the gorge at the sacrifice of 11 rafters’ lives. The survivors are the only people to ever conquer Tiger Leaping Gorge by raft.

In 2004, hydropower companies proposed to build a 276-meter (906-foot) high dam in Tiger Leaping Gorge. If built, 100,000 ethnic minority people might have had to leave their hometowns, cherished cultural heritage would have been flooded, and treasured animals and plant species may have died out...

Lasting for 3 years, a great campaign by environmental activists and villagers' protests put the Tiger Leaping Gorge Dam Project on hold in 2007, and this majestic gorge was saved! This movement was documented in the film Waking the Green Tiger.